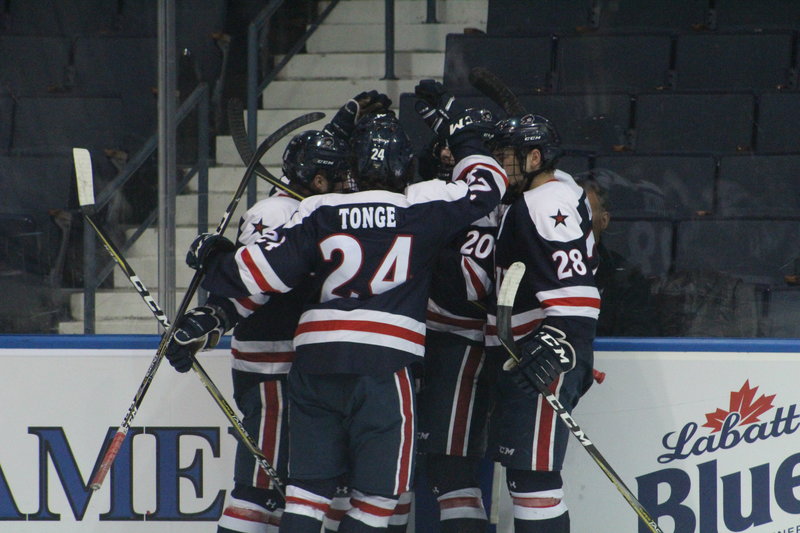 Everything you need to know: AHC semifinals

It wasn’t easy, but the RMU Colonials pulled out the 5-4 victory in OT to advance to the AHC Championship thanks to the game winner by Michael Louria. Here’s everything you need to know.

The Colonials were led by senior Brady Ferguson, who was the savior for the Colonials on the night as he was able to score a hat trick on the night. His trio of goals included a game-tying wrist shot that sent the game to overtime. This is where Michael Louria was in alone against Mercyhurst goaltender Brandon Wildung. He quickly moved the puck to his backhand and put it in the top of the goal.

For the Colonials, the star on the night was without a doubt Ferguson. HIs hat trick helped carry RMU throughout this game. The senior also stepped up in the clutch, scoring the game-tying goal with less than a minute left in regulation to send the game into overtime. Louria was the other star for RMU on the night as he had a beautiful assist to Ferguson early in the game, and then the overtime game winner.

One player who struggled at times was RMU goaltender Francis Marotte. Although he made a fantastic pad save at the end of regulation, the sophomore was shaky at times. The first goal Marotte gave up is one that he mostly would like back. Marotte also struggled at times to contain rebounds leaving the puck open in front of the net.

Daniel Mantenuto showed up and continued his solid playoff run. He put the Colonials in the lead in the third period at 3-2, and overall played a solid hockey game.

Up next for RMU will be the winner of the Air Force Falcons and Canisius Golden Griffins.