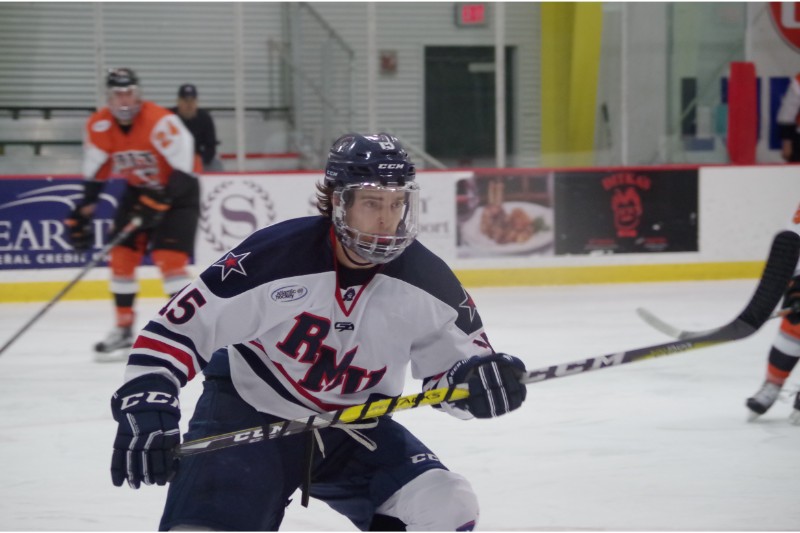 After an action packed three periods of play the RMU Colonials were able to hold off the Army Black Knights and pick up their second win of the season with a 4-2 victory. Luke Lynch led the scoring with two goals for the Colonials. The two teams will square off again tomorrow night at 7:05 p.m.

Robert Morris men’s hockey squared off against the Army Black Knights on a cool Friday night at Colonial Arena. RMU earned a power play just a minute into the period, and it cashed in on the opportunity with an Eric Israel goal from Alex Tonge and Michael Louria. Then, not even a minute later the Colonials doubled their lead after Luke Lynch’s shot found its way into the back of the net.

After the Colonials opening onslaught, play began to open up, and the Black Knights cut RMU’s lead in half with a goal from junior Tipper Higgins — assisted from defenseman John Zimmerman.

Shortly after Army’s goal, RMU found itself on the power play once again. This opportunity was fairly uneventful, as the Colonials struggled to set up in the offensive zone. At the end of this opportunity the Black Knights took another penalty to put RMU on a brief 5-on-3.

After Army gained a man from the penalty box the Colonials had a dangerous chance turned away and then failed to score on the remaining 5-on-4 power play.

Army then had a chance of its own with the man advantage, but RMU prevented the Black Knights from setting up in the Colonials zone. RMU created a great chance on the penalty kill, but it was unable to score on a 3-on-1 rush.

After killing off Army’s power play, the Colonials were awarded their fourth man advantage of the period, but they were unable to create much offense during the opportunity and went into the first intermission with a 2-1 lead.

The non-stop action of the first period continued in the second as the Colonials were awarded a power play within the first two minutes of the period. The Colonials came close to increasing the lead early in the man advantage as they beat Army goaltender Cole Burns, but not the crossbar.

After holding off RMU’s power play unit, the Black Knights had their opportunity up a man after an RMU roughing penalty. The Army power play struggled to establish a presence in the Colonials zone, and Brady Ferguson took advantage. He pounced on a loose puck and scored a shorthanded breakaway goal to put RMU up, 3-1.

However, this two-goal cushion would not last long as the Black Knights were able to utilize their remaining power play time. They eventually cashed in as Michael Wilson’s backhander beat Francis Marotte to bring Army within one goal.

The two teams traded chances halfway through the period as the Black Knights had a shot saved by Marotte’s blocker; however, he couldn’t find the rebound, causing confusion in front of the RMU net.

Luckily for the Colonials, they were the first to the loose puck and created a rush of their own that resulted in a very good cross-crease save from Burns.

Army was awarded another power play after a slash was called on RMU’s Spencer Dorowicz, but the Black Knights were unable to put the puck past Marotte during their man advantage.

After Dorowicz was released from the box he came out onto the ice and made an immediate impact. He fired the puck off the mask of Burns, and then moments later he picked up an assist as Lynch picked up his second goal of the night off of a Matthew Graham rebound.

Keep up with the action here: