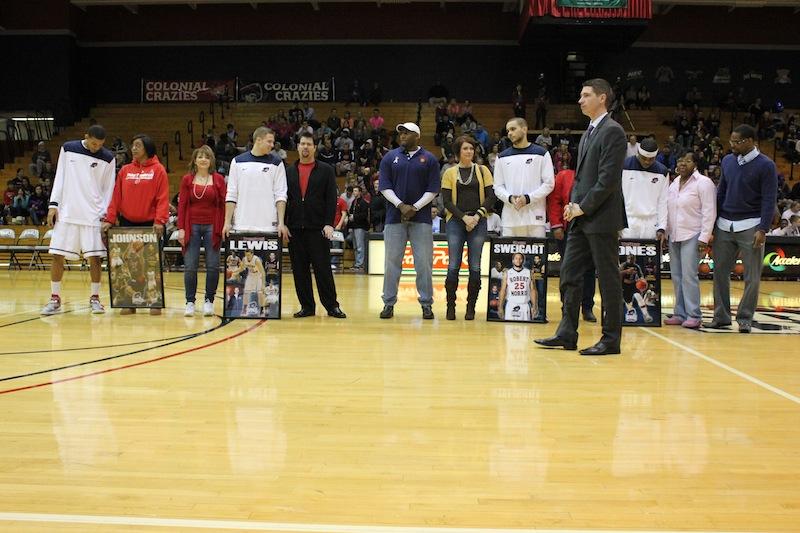 Throughout his four years with the Robert Morris basketball program, Treadwell Lewis has been a member of both a Northeast Conference championship, and NCAA tournament team, and was named to the NEC Winter Academic Honor Roll three times. But until Saturday, the one thing the walk-on guard hasn’t done was start a game for the Colonials.

That all changed however, when RMU hosted league foe Fairleigh Dickinson on senior night. Lewis, alongside teammate Shane Sweigart, took the court as members of the starting lineup for the first and last time of their respective careers during Robert Morris’s 89-46 rout of the Knights.

“It was amazing,” said Lewis on starting the game. “A packed house in front of family and friends that have known me for either the last four years or my whole life meant a lot after the hard work and practices that you put in. To finally get out there and have a chance like that, I can’t express in words.”

After winning the opening tipoff, fellow senior Russell Johnson found Lewis streaking toward the basket, but the native of Shelton, Connecticut was unable to convert the layup. He was however, fouled on the play.

With the support of the 1,623 fans that were jammed into the friendly confines of the Charles L. Sewall Center, Lewis drained his first shot from the charity stripe, which netted him his 10th career point.

“It wasn’t a set play right off the tip, but I just want to thank Russ for passing it to me. I took it to the hoop and was able to get fouled, and make a free throw so that was really exciting,” he added. “I just feel really privileged and honored that they [the Colonial Crazies] support me the way that they do.”

FDU took a 5-1 lead 45 seconds into the contest, but the Colonials knotted the score at five all moments later later after Johnson’s behind the back pass split the Knight’s defenders and found Mike McFadden for an easy slam.

Robert Morris built up a 19 point advantage at halftime, and cruised through the rest of the game, leading by as many as 47 after Velton Jones knocked down a three pointer at the 5:52 mark of the second half.

After building a substantial lead, RMU head coach Andy Toole opted to let his two non-scholarship players run the clock out after they were subbed into the contest with 4:32 remaining.

Sweigart, who has appeared in nine career contest as a member of the Colonials basketball program, said that he was waiting for his chance to be on the floor for senior night ever since switching to basketball from the NCAA lacrosse team two years ago.

“It was pretty exciting for me, playing another Division I sport, and then switching. It was a dream come true, really,” said the Harrisburg native. “You guys saw me complete a childhood dream tonight. That’s the best way I could sum it up.”