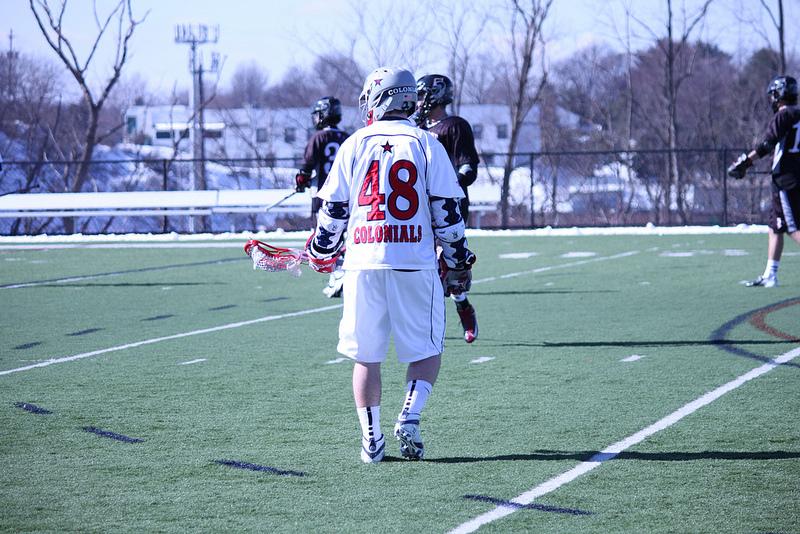 The Robert Morris University men’s lacrosse team defeated their non-conference opponent Detroit 9-5 on a foggy Saturday afternoon at Joe Walton Stadium. Although the weather wasn’t pretty, the Colonials won their second straight game to improve to 2-1 on the year with a solid performance at both ends of the field.

“Defensively they were just trying to give me shots that I could save,” said Ruppert. “The defense did a great job of putting me in position to make saves. I have to give them a lot of credit.”

Senior attack Jake Hayes led the offensive surge for RMU, tallying three goals and three assists on the day without giving up a turnover. Last year’s team leader in goals was a crucial component to the offense once again, using both his scoring and passing abilities to produce six of the team’s nine goals.

“We were just trying to play fast today,” said Hayes. “We wanted to keep the tempo up. It played out in our favor and we were able to push a lot of goals out of that style of play.”

Other contributors on the offensive end were midfielder Taylor Graves and attack Dave Morton, who each posted two goals in the win. Also playing well were brothers Tyler and Eric Rankel. Tyler, a junior long stick midfielder, played a big part of the Colonials ball possession with five groundballs in the contest, and even scored a late first-quarter heave as time expired.

Eric, the younger sibling, scored once and assisted two others to improve his total to twelve points on the year, which is leading the team as a freshman.

“Both of them are awesome,” stated Hayes. “Eric’s played unbelievable for us and is getting into the swing of things quite early. Tyler is an aggressive ballplayer, winning face-offs and doing everything we need him to do. Both of them have tremendously helped our team this year.”

RMU head coach Drew McMinn was satisfied with the win, but continued to emphasize the team’s attitude.

“A lot of the emphasis this week was on staying positive,” he said. “We thought the guys did well with their discipline and keeping things moving the in right direction.”

The Colonials look next to a home matchup on March 2 with Drexel University, who are sure to be one of the toughest opponents they’ll face all season.

“Their certainly a tough opponent, so we’re excited to get back at it on Monday,” said the second year head coach. “We’re going to break down the film on them, but overall we just want to keep increasing our pace and playing as fast as we possibly can.”