Profiling the Colonials: After a long offseason, Spear, Cheeks and Farris eager to get back on court 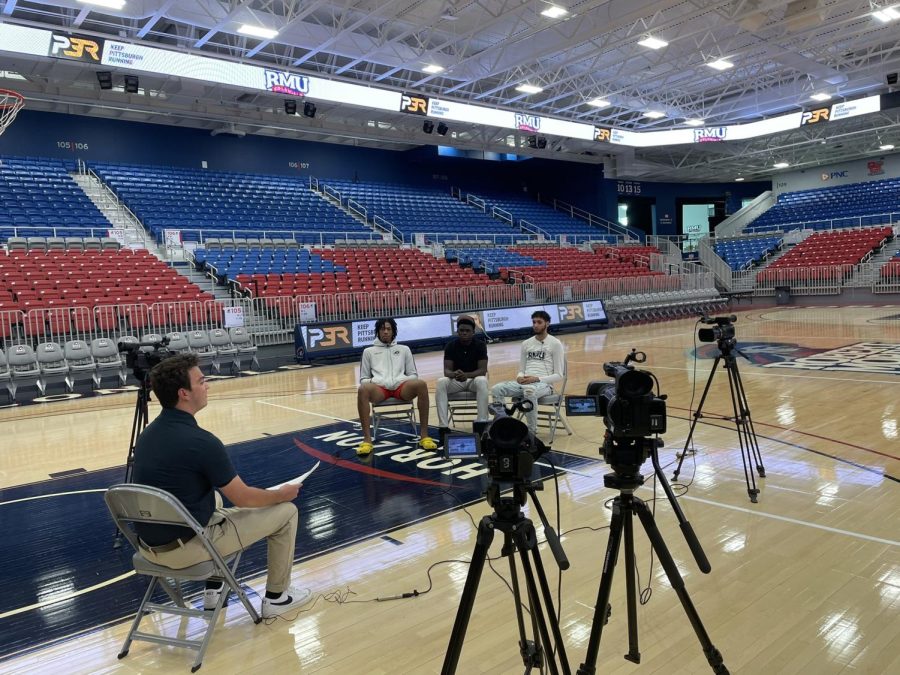 As college basketball quickly approaches, Kahliel Spear, Enoch Cheeks, Kam Farris and the Robert Morris men’s basketball team as a whole are looking forward to stepping back onto the court for the Colonials in 2021-22.

The offseason was a lot more chaotic than in years past for the Colonials as ten players either graduated or transferred out of the program.

For the three returning players, they are choosing to not look in the past but to look ahead to this season. Kahliel Spear, who joined the team from Bucknell last year and blossomed into an important piece of the frontcourt, is putting 2020-21 in the rearview mirror.

“We have a new team this year, I am not too hung up on what happened last year,” Spear said. “Whatever the reason was that we weren’t successful last year is in the past and I don’t think there will be any correlation to this year.”

Enoch Cheeks had to go through the same trials and tribulations as everyone else last season, playing as a freshman in a less-than-normal first year in the NCAA.

“I know every team every season has a lot of ups and downs but like [Kahliel] said, we have to put that in the past and focus on this season.”

With the amount of roster turnover on the team that occurred over the past several months, many would think the rest of the players on the team would jump ship also, but for Spear, Cheeks, and Farris, that was just not the case.

“Nothing happened last year that was related to my decision to come here. The opportunity is still there,” Spear said. “All the promises they gave me are still here so I know I have to work for them and if I continue to do that I’ll be in a good spot.”

Cheeks echoed what Spear said by talking about trusting the process.

“Every year is not guaranteed that you are going to have a great season, so to come back this season and turn around from a bad season last year will be even more fulfilling.”

Farris built many relationships from his time on the bench during the latter half of the 2019-20 season to his freshman season as they ran towards an NEC Championship while he was with the team in 2019-20. He reflected on that and talked about not breaking that bond with his teammates.

“We practice every day together, we go to war on the court together. I feel like we owe it to each other to see what we can do and come back this year.”

Head coach Andy Toole had a busy offseason trying to reconstruct his roster from scratch after losing almost his whole squad. He did just that, bringing in players from all over the country such as Raheem Dunn (St. Johns), Michael Green III (Bryant), Ferron Flavors Jr. (Oklahoma State) and Jaron Williams (UT Martin) just to name a few.

The group discussed their eagerness to get back onto the court during the summer months and start building relationships with their new teammates.

“I know from experience that the season is long and it is a long process. You don’t get that much time in the offseason so you have to treasure that. I knew with all the new guys that we had come in, they’re going to have to learn the system and learn how the coaches operate the program,” Spear said. “It’s an adjustment and it’s not like every other program, so I feel like we had a good session in the summer and got the guys adjusted.”

Cheeks talked about building relationships with his new teammates throughout the offseason, bringing experience with Toole to the table, even as a sophomore.

Farris discussed the different types of players on the roster and how he was excited to see how the team gelled together.

“We got some older guys that came in who knows what it takes to win and who have been other places and have seen a lot of basketball,” he said. “We also added some younger kids that are hungry. I’m excited to see how everybody moves.”

The team struggled last season, posting the league’s worst record of 4-15 overall and a 3-12 record in the Horizon League. Even though the team placed last in the standings at the end of the year, statistically speaking they were around the middle of the pack in most of the statistical categories.

With a brand new team and a lot of uncertainty surrounding the Colonials, many college basketball publications across the nations are slotting Robert Morris in the bottom third of the conference in the preseason polls.

For Spear, Cheeks, and Farris, they are using the polls as extra motivation heading into this season.

“The challenge of being the last rated team in the conference, that’s something that you always like when you’re the underdog and then you can prove people wrong,” Spear said. “People think we are the underdog based on last year’s performance but we have a different team so I don’t know if it’s fair to rate us in that spot. Being ranked 12th in the conference means that they don’t think that we have talent or that we can’t win.”

“[Other] teams really have no idea what we brought in and how well we’ve gelled over this period we’ve had,” Farris said. “It’s going to be fun to surprise teams.”

The three were all key contributors on the team last year and they all expressed different ways that they have been improving leading up to this season.

Spear averaged just under 10 points per game and 5.2 rebounds a game, he explained things that he was working on in the gym to take his game to the next level, such as creating more plays for his teammates.

“I’ve been working on my playmaking ability, and just being able to work to create more opportunities for me and my teammates,” he said. “That’s something you do every year, but coming into this year as one of the more experienced forwards, I made sure I knew the system and how I can create out of it. Last year, it was hard to see the openings to break off from the offense a bit. I’ve seen it more and worked on my game to be able to fit towards that.”

Cheeks was a stout defender in the 15 games that he appeared in, averaging a steal per game while putting up just under five points. He expressed how he has been improving on the offensive side of the ball.

“Last year I didn’t shoot the three-ball at a high clip. Over the summer I think I shot pretty sure I shot close to 38-percent,” he said. “[I worked on] becoming a better shooter so that I can be more versatile and space the floor more to help my teammates.”

Farris started in 16 of the 17 games that were played last season and averaged 8.3 points per game. At the guard position, Farris shot the ball at a 47-percent clip from the field and 46-percent from beyond the arc. Farris discussed having more confidence when it came to the offensive side of the ball.

“I would say [I’ve been improving on] driving to the rim, not being as timid and stay on the perimeter and shoot threes but get to the rim and either make a play for myself or a teammate.”

The first thing that comes to most college basketball fans in the offseason is the schedule. In years past, head coach Andy Toole has landed some high-profile matchups on their non-conference schedule, including games against power-five schools such as Purdue, Louisville, and USC.

This year was no different for RMU, renewing an old rivalry as they will travel to Lexington to take on Kentucky in the trilogy battle of the Wildcats and the Colonials. They also have a non-conference battle against Davidson on November 27.

Farris talked about how the Kentucky game is personal for him.

“Part of my family is from Kentucky and have been fans, but this time it is not going to be friendly. Hopefully, we can upset them at Rupp.”

Spear discussed the Kentucky game but also mentioned how the team cannot key in on just one game on the schedule.

“As a ballplayer growing up, you see the teams like Kentucky and the blue-bloods. It’s always exciting to play teams like that, those are once-in-a-lifetime experiences so I am looking forward to that game,” he said. “You have to hold all games to an equal value. You can’t put that game above our conference games because the conference games are going to be the ones that get us to the tournament. You have to treat every game the same.”

Farris and Spear then explained what fans can expect out of the team this upcoming season.

“We’ve got a lot of athletes on this team. It’s going to be an above-the-rim style of play whenever we play,” Spear said. “We play inside-out, but we have guys that can attack the rim so it is going to be fun to watch.”

Farris said, “I think part of our identity is how interchangeable we are and how we have different players who can do different things. It is going to be nice to see when we get out there.”

As the season quickly approaches Farris, Spear, Cheeks and the entire squad are very excited to usher in a new year of Robert Morris basketball, starting on November 10 at Central Florida.