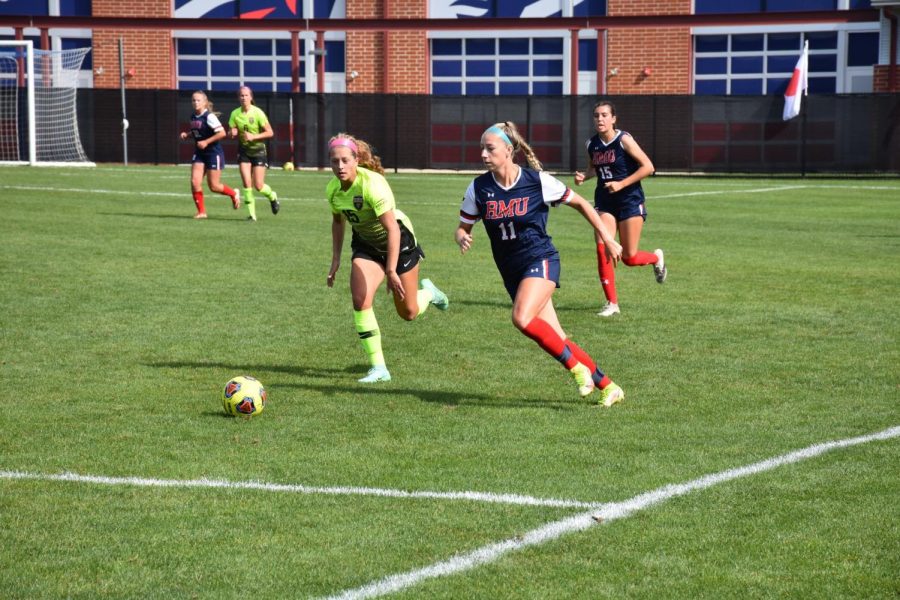 Sheridan Reid and Sydney Grodsinsky chase after the ball.

MOON TOWNSHIP– Women’s soccer (4-10-2, 0-6-2 Horizon) was unable to complete the Robert Morris homecoming sweep after football, men’s soccer, and volleyball were all victorious this weekend.

The Colonials dropped their Sunday afternoon matchup against the Oakland Golden Grizzlies (7-7-1, 6-0-1) at home 3-0.

Robert Morris put up one shot on net, whereas the Golden Grizzlies had nine on nineteen shot attempts. RMU shot themselves in the foot early on again letting in two goals off of corner kicks in the first half.

“[Oakland] is a really good team up there at the top of the table with Milwaukee and Northern Kentucky. I am just disappointed with our attention to detail,” he said. “The two corners and the lack of responsibility put us down early two-nil and unfortunately that has happened to us a couple of times this year.”

One of the few Robert Morris chances came after a break for leading scorer Haleigh Finale, who hit the post on her shot attempt. Finale leads the Colonials with five goals and six assists this season as a sophomore.

Robert Morris’ offensive zone pressure was better in the second half but still could not muster up any good quality chances. After Oakland scored their third goal of the match from Alexa Sabbagh, the Golden Grizzlies put in their backup goaltender. Regan was not disappointed in the second-half effort.

“I think we played better in the second half, I think we came around a little bit, I think we got in behind them a couple of times. Again, with the limited chances that we had, we didn’t capitalize on [them].”

Women’s soccer will be back in action this upcoming Thursday back on the road at Wright State for a 7:00 p.m. kickoff.