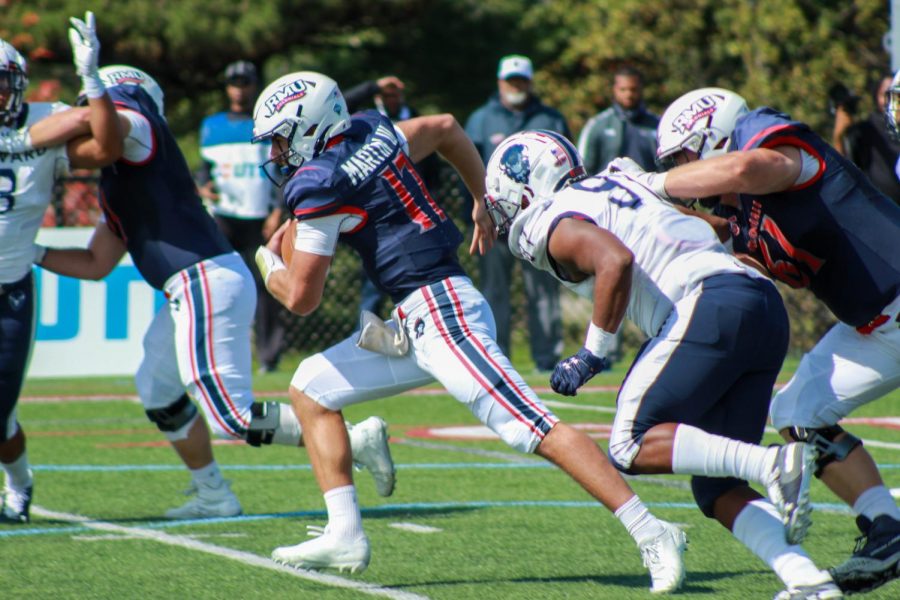 After getting blown out by Central Michigan two weeks ago, Robert Morris picked up their first win of the season on Saturday, a 22-16 edge over Howard. The game was full of back-and-forth action until the Colonials mounted a late drive and pulled it out in the end. As the time ticked down, there were a few things to take away from the win over Howard.
“Let George Cook”
Running the ball 40 times is not a bad thing at all, especially when Alijah Jackson rushes for 100+ yards, but I would like to see a few more shots taken down the field. Quarterback George Martin had a good game with 11 completions, 146 passing yards and two touchdowns, but he was out-played in the passing game by Quinton Williams of Howard, who tossed for 254 yards in the loss.

It felt as if the coaching staff didn’t trust him even though his connection with D’Andre Hicks seemed rock-solid, especially after their 43-yard catch and score. Another idea would be to run the ball with Martin because there were many open plays that he could have had but the ball was handed off.
A bounce-back for the defense
After giving up 45 points two weeks ago, which is hard to believe, the defense looked extra sound this weekend, showing up and giving up 16 points and showing out when it matters most. The Colonials played well and proved they can play solidly on the defensive side of the ball, and if they continue to push the pace, they’ll be just fine this year.
Colonials need to keep grinding
Robert Morris is going to have to play soundly to compete in the Big South this year, and it’s very important to do so when they take on North Carolina A&T in their first matchup. RMU was picked to be last in the preseason poll, and if they do go cold with the ball like this week during conference games, it could be a very long season.
Conclusion
All in all, there was a lot to like about the team’s performance this weekend on both sides of the ball. It was great to have fans back at “The Joe” and the team honored the stadium’s namesake with a resounding victory in a fun day at the field.

The football team is in action again on Saturday when they take on North Carolina A&T at BB&T Stadium in Greensboro at noon as they look to get their first win as a member of the Big South.