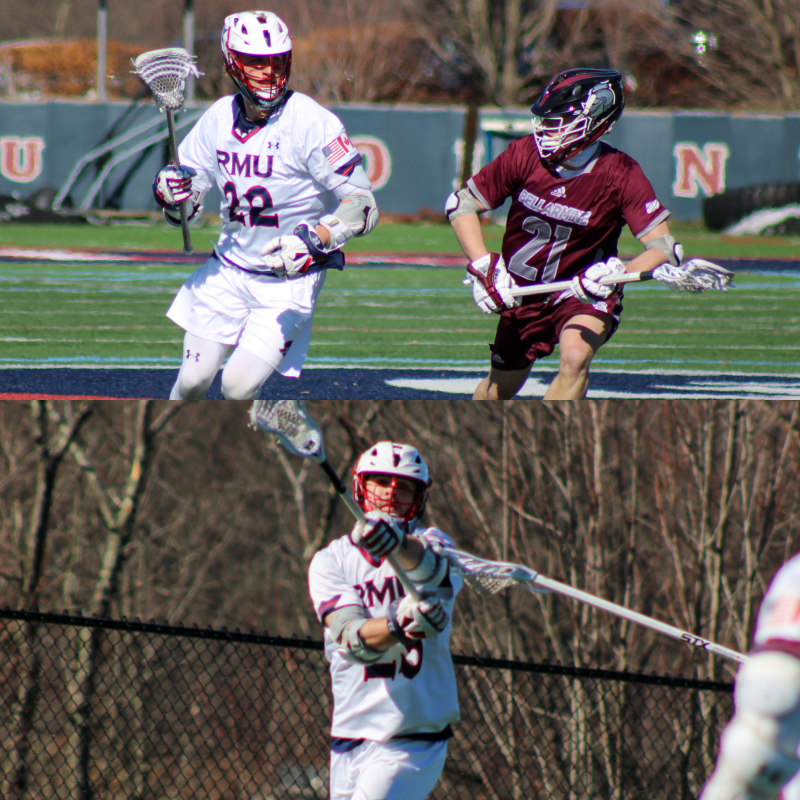 Jake Boudreau (top) and Corson Kealey (bottom) were both selected in the NLL Draft.

On Saturday, the Robert Morris men’s lacrosse team continued its tradition of sending players to the pros with Jake Boudreau and Corson Kealey selected in the National Lacrosse League (NLL) 2021 Entry Draft.

For the seventh time in program history, the Colonials produce a first-round talent with Boudreau selected seventh overall by the Saskatchewan Rush. Kealey became the second RMU player to be drafted this year with the Rochester Knighthawks selecting him with the 19th overall pick.

Boudreau and Kealey have put together strong collegiate careers to date and will return to Robert Morris as fifth-years this coming spring after taking advantage of the NCAA waiver as a result of the COVID-19 pandemic.

Boudreau has appeared in 54 games, including 42 starts at midfield. Throughout his career, Boudreau has amassed 86 points, with 46 goals and 40 assists. During last years’ campaign, the Brampton, Ontario product collected a team-high 58 groundballs, which gives him 97 in his career and finished third on the team with 28 points.

Kealey sits ninth all-time in all-time goals for RMU with 90 as he will look to climb the ladder in his fifth year to sit amongst the upper echelon of goal scorers. He also has scored at a clip of 1.91 goals per game, which is the fourth all-time in program history. Kealey started his career at RMU during his freshman season by earning a selection to the All-NEC Rookie Team and followed that season up with a team-leading 52 goals in his sophomore campaign.

With the two selections in the 2021 draft, Robert Morris has lengthened its professional pipeline with a total of 25 players chosen in the NLL Draft, which saw 11 players compete in the NLL last season.

One of the former Colonials currently in the NLL is Kealey’s brother JonPatrik, who was selected back in 2017 10th overall by the New England Black Wolves. Additionally, Boudreau was selected by a Rochester organization that drafted former prolific Colonial attackman Ryan Smith 3rd overall in the 2020 draft.