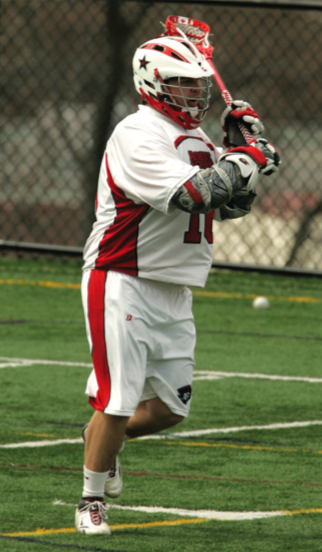 In his freshman season at RMU in 2009, Moore was third on the team in goals with 18 with the team playing in the Colonial Athletic Conference (CAA). He also recorded nine assists for 27 points, which was fourth on the team. He tied for 10th in the CAA in goals per game in conference-only games with 1.67. He was named to the CAA All-Rookie Team and was awarded Rookie of the Week honors on April 14th, 2008.

In his sophomore season, the Port Coquitlam, British Columbia native finished the season first on the team in points with 47. He also was first in assists with 16 and tied for first on the team with 31 goals. Moore was second in the CAA with 2.94 points per game, tied for third in the league with 1.94 goals per game. He also placed sixth with 1.00 assists per game in the CAA. He recorded 11 multi-goal games, three multi-assist games and 13 multi-point games.

In 2010, Moore set the school record for points in a season with 60, scoring 35 goals and handing out 25 assists as the team made the move to the NEC. He was ranked 10th in the nation in points per game, 15th nationally in assists per game, and 27th nationally in goals per game. The junior was named the 2010 Northeast Conference Player of the Year. He also was a USILA All-America Honorable Mention and was named to the First-Team All-Northeast Conference team. Moore led the NEC in points per game and was the only player in the conference to average more than 3.50 points per game.

In his senior season, Moore was named the Northeast Conference (NEC) Player of the Year for the second straight season. He broke his own school record for points, scoring 61 and was a USILA All-America Honorable Mention for the second season in a row. Moore also led the NCAA in goals with 50 and goals per game with 3.33. He also ranked fifth nationally in points per game at a 4.07 mark.

In his career at Robert Morris, Moore recorded 116 goals, 52 assists, and 168 points. Several of his records were shattered this season by Ryan Smith.