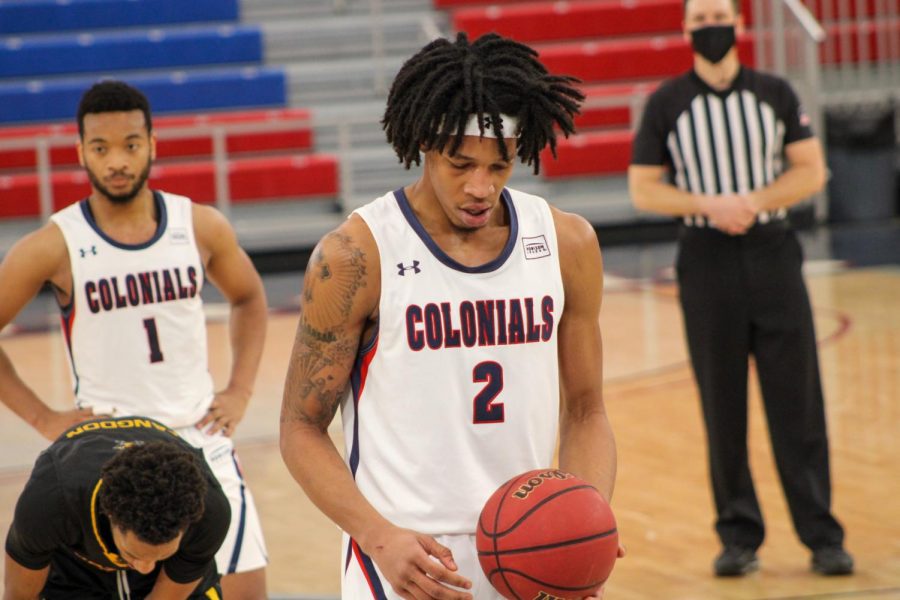 Kahliel Spear should be a huge part of the 2021-22 team-- and Ethan Morrison breaks down why this year's team is the best in RMU history. Photo Credit: Tyler Gallo/Colonial Sports Network

*Editor’s Note: Opinions are of the writer and not Colonial Sports Network as a whole. This is part four of a four-part series of Ethan Morrison’s top RMU basketball teams of all-time. Check out the last part here.

While it is true that this year’s team is not battle-tested and they have not hit the floor together for a single game yet, after coming off of Andy Toole’s worst year as head coach of Robert Morris where the team posted a 4-15 overall record, you cannot ask for a better roster this season.

Going into this season, only four players from the roster from just one year ago remain. Charles Bain and Jon Williams both graduated and decided to not use up their extra year of eligibility and the rest of the team transferred. Only Kam Farris, who was on the bench for the 2020 NEC championship game, remains on the team from their last tournament victory– and he didn’t play because he was a rising freshman.

So how in the world can this team be good especially with the amount of roster turnover that took place over the past season? The answer is quite simple really. The transfer portal.

After the NCAA enacted the one-time transfer rule, players flooded the portal. This allowed Coach Toole to strike and find talent that will boost Robert Morris into the top fourth of the Horizon League this season.

It all started back on December 16 when Brandon Stone announced that he would be transferring to Robert Morris, holding onto three years of eligibility. In his freshman season with La Salle, Stone appeared in 25 games and averaged three points and around two rebounds a game. He scored a career-high 17 points against Wright State on November 26.

Stone joins a Colonial team that is desperate for a true center. The last center that Robert Morris had was all the way back in 2016 when Braden Burke played just one season before transferring to Michigan State.

The Alverton, Pennsylvania native will be a major boost down low for the Colonials and will help compete with the strong and physical teams in the Horizon League.

Fast-forward to January when Justin Winston transferred into the program. In years prior, Toole had just Charles Bain that could stretch the floor as much as Winston could.

With Winston, you have the whole package. He’s physical, can slash, shoot a tight mid-range shot and also hit with ease from outside.

Winston previously played in the Atlantic 10 conference, which is one of, if not the top high major conferences in the country. In the past two seasons, the conference has housed two future NBA draft lottery picks.

With that being said, the forward averaged 8.7 points and 3.4 rebounds a game over 31 games and 28 starts. He shot the ball at a 43.8 percent mark overall and 33-percent from outside. Head coach Andy Toole spoke highly of Winston in an interview with Colonial Sports Network.

With three more years of eligibility, Winston will be a force in the Horizon League for years to come with the Colonials.

After the season ended, Toole ramped up his recruiting efforts adding more size and depth with 6-foot-8 forward Mattia Acunzo, the highest recruit in Toledo history. In his only season with the Rockets, the “Italian Stallion” averaged 5.9 points and 3.5 rebounds, shooting 52-percent from the field and hitting 40-percent of his three-point attempts.

Just two weeks later, Robert Morris got another commitment from a familiar foe in Rasheem Dunn. Dunn spent two seasons with St. Francis Brooklyn, facing off against Robert Morris frequently. In his freshman season, he averaged 13.1 points per game, and by scoring 394 points, that was the most in a single season by a Terrier in the NEC era.

He had another dominant year in his sophomore season before deciding to transfer to Cleveland State, Robert Morris’ new Horizon League foe. Dunn never played for Cleveland State as after he sat out the year due to NCAA transfer guidelines, he decided to take his talents back to the city that never sleeps to play at St. John’s.

After sitting out a year, you would think that Dunn would struggle early on but think again as Dunn ranked 18th in the Big East in scoring, recording 11.9 points per game. He also reached double figures 21 times, notching one double-double.

In his senior season, Dunn took a small dip in production, only averaging 9.4 points per game although he still ranked ninth in the Big East in assists.

Dunn is not only a sharpshooter that can hit shots with ease but possesses good tangibles and playmaking abilities. He has one year of eligibility remaining and will be looking for a deep postseason run with RMU.

Just one day later, Toole landed another massive recruit in Ferron Flavors Jr. who played last season at Oklahoma State University. Flavors has been all over the place in his five-plus years of collegiate basketball.

In his freshman season, he averaged 17.6 points in 28 games with South Mountain Community College. He then transferred to Fairfield where he averaged 12.3 points in 33 games. After transferring to Cal Baptist and sitting out a year, Flavors started all 31 games in his senior season, averaging 13 points and 3.5 rebounds. He led the Western Athletic Conference in three-point field goal percentage.

In his graduate season, Flavors transferred to Oklahoma State to play with the consensus no. 1 overall pick in the NBA draft, Cade Cunningham. In 24 games in which Flavors started seven, he averaged 3.4 points. This was a considerable drop-off in production, yet Flavors can still knock down shots with the best of them and will be a nice addition to the Colonials’ roster.

Not even a week later, Toole landed yet another familiar face in Michael Green III. Green spent two seasons at Bryant racking up numerous accolades.

In his freshman year, he picked up the NEC Rookie of the Year award and an All-NEC Rookie Team nod all while averaging nine points per game and hitting double figures on 15 occasions.

In his sophomore season, Green started in all 21 games and averaged 16 points and just below four assists per game. He led the Bulldogs to the NEC Championship game in 2021 but fell to Mount St. Mary’s. He also earned All-Northeast Conference Second Team honors.

Green will be a key player on this year’s roster. I see him as a reliable bench option with guards like Dunn and Flavors taking the one and two spots in the starting rotation.

Toole then went the JuCo route next, getting Matt Mayers to join the program after two years at Hutchinson Community College. After a rough first season at JUCO, the 6-foot-8 forward broke out in his sophomore season, averaging 17.8 points per game and 9.4 rebounds per game. He shot a ridiculous 60-percent from inside the arc and was named to the 2021 NJCAA Division I All-America First Team.

Jaron Williams transferred into the program next after spending his first two seasons in JuCo before transferring to UT Martin for his junior season.

Williams played in all 24 games for the Skyhawks, starting in 22. He averaged 10 points and three rebounds per game. He led the team in field goal percentage, hitting shots at a 49.2-percent rate. Williams will be a valuable asset for this team and still has two years of eligibility remaining.

For the cookie toppers, two starters who ranked third and fourth overall in the team in points are returning.

Even though Enoch Cheeks struggled from an offensive perspective last season, Cheeks performed well on the defensive end, locking down his matchups and ranking fifth on the team in steals. He will also be returning for Robert Morris.

One of last season’s walk-ons, Chase Cook, will also be returning. While he did not play in the short 2020 season, expect him to hit the court at some point this year.

Top to bottom, this team is loaded. There is so much depth at every position. The Colonials also have one high school recruit in Tristian Jeffries who will also be another solid option for this team this year at forward.

As we look back at all of the different top rosters in Colonial history, one thing that stands out to me is depth and how important it is if you want to make a deep run in the postseason.

You really cannot ask for anything more from this team. There are no deficiencies and that is why this roster is/will be the most dominant roster of all time. All they have to do now is go out and compete!