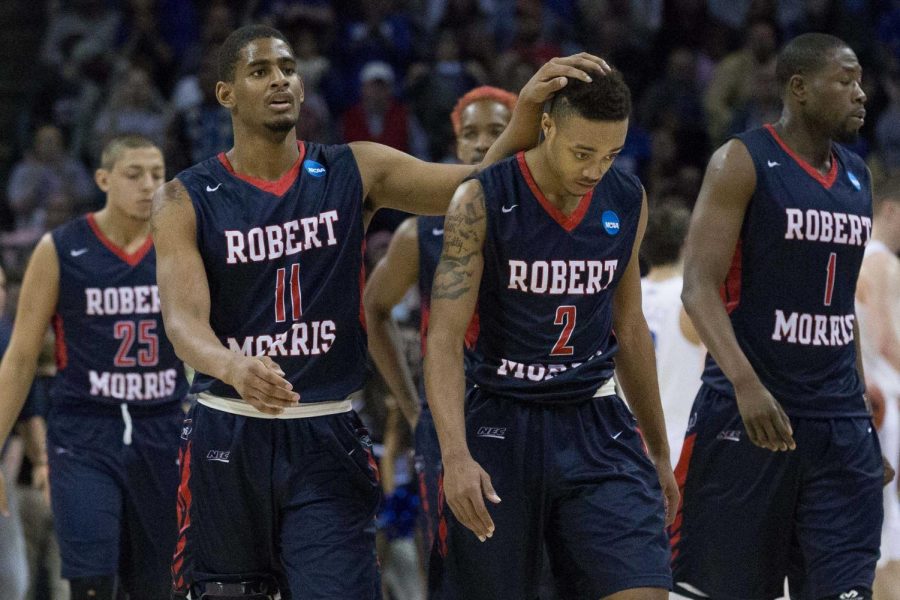 Back in 2013, Robert Morris pulled off an improbable upset at the Charles L. Sewall Center against the University of Kentucky in the first round of the National Invitation Tournament (NIT).

In 2014, the Colonials once again fell a game short of the NCAA Tournament, falling to Mount St. Mary’s for the second straight year in the NEC championship game. RMU pulled off another improbable upset in the first round of the NIT, defeating the St. John’s Johnnies on the road in impressive fashion, storming to an 89-78 victory.

In 2015, Robert Morris finally broke down the brick wall by defeating Saint Francis Brooklyn on the road to win the Northeast Conference title and advance to the NCAA tournament for the first time since the 2009-10 season, a tournament where they fell to Villanova in overtime.

This season is when my RMU men’s basketball fandom started.

Over the past decade and change, especially during the Mike Rice and Andy Toole eras, Robert Morris has crafted some of their best rosters of all time. However, I believe the roster that Andy Toole has formed for the 2021-22 season is the most talented of them all.

Look, I get that this roster has yet to hit the floor and several new faces will take the court, but just looking at the veteran presence on the team now and the previous track records of transfers that are coming into the program, I believe this roster is the greatest in RMU men’s basketball history.

I will be basing my rankings in terms of roster talent which will consist of scoring output, both individually and for the team, along with the team’s success both in the regular season and how the team fared in the postseason.

Over the next few weeks, I will be breaking down some of the greatest rosters to ever hit the hardwood in Robert Morris history.

The 2014-15 season, in my opinion, marked the end of one of the most dominant eras of Robert Morris basketball. Over eight seasons and transitioning between two coaches, the Colonials never skipped a beat, making it into the NCAA tournament a total of three times, including back-to-back appearances in 2009 and 2010.

They also clinched three automatic berths in the NIT, featuring consecutive years where they pulled off nearly impossible upsets of Kentucky and St. John’s in 2013 and 2014, respectively. In 2011, they also were invited to the Collegeinsider.com Tournament (CIT), where they advanced to the quarterfinals.

That dominant stretch ended with a flourish. After two straight NIT appearances knocking off some of the top high major schools in the country, Robert Morris made it back to the “Big Dance”.

Despite members of the early 2010 team departing due to graduation, there was still a solid mix of a veteran presence with the likes of Lucky Jones and Rodney Pryor. Some younger and inexperienced players at the Division I level like Marcquise Reed and Elijah Minnie were on the team as well.

Junior guard Pryor led the way in scoring this season, averaging 15.6 points. Not too far behind him was Reed, who averaged 15.1 points per game. Jones, who was one of the top players on that 2013 team that defeated Kentucky, averaged around 14 points per game.

Lincoln Park guard Minnie started 21 games as a freshman and averaged a respectable 6.8 points per game. Kavon Stewart and David Appolon were not too far behind him, averaging around six points per game.

Team statistics were not as dominant as they were in years prior, but Robert Morris still had solid numbers as a team. They ranked third in scoring in the Northeast Conference, averaging a nice 69 points a game while ranking fifth in points allowed. The team also led the NEC in three-point percentage, shooting the ball at a 37-percent clip from beyond the arc.

The Colonials kicked off the 2014-15 campaign with a loss at home to Lafayette. The team then participated in the Battle for Atlantis where they struggled against tough competition, losing to North Carolina, Georgetown and Chattanooga, They defeated the University of Lousiana at Monroe in the final game of the multi-team event.

RMU started NEC play churning out three straight wins before losing their next two games. Robert Morris finished NEC play with a 12-6 record with yet another berth in the NEC tournament as the second seed.

After the win against St. Francis Brooklyn, Robert Morris got their first taste of the play-in games at the NCAA tournament as the Colonials took on North Florida and with a win, the team could earn a date with top-seeded Duke in the second round.

RMU snuck by the Ospreys, defeating them by a score of 81-77. Pryor and Jones both eclipsed 20 points as Jones scored an impressive 21 points off the bench in 31 minutes while Pryor scored 20. Reed also scored 19 in the winning effort.

In the matchup against Duke in the second round, Robert Morris exchanged blows with Coach K and the Blue Devils, but Duke proved too much to muster for the Colonials as they pulled away at the end of the first half and rolled into an 85-65 victory. Pryor and Reed both scored over 20 points in the losing effort.

Even though this roster will not eclipse the accomplishments of the other rosters that will be mentioned in the series, this squad was still very dominant.

Stay tuned for next week as I break down the third-best roster in Robert Morris men’s basketball history.