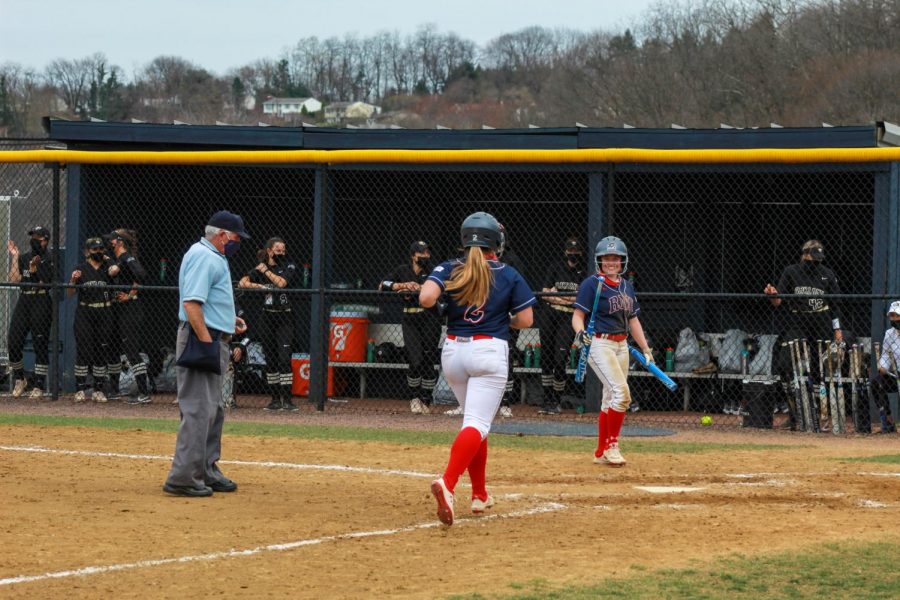 MOON TOWNSHIP– After splitting the day-one doubleheader against Oakland, Robert Morris looked to pick up right where they left off late yesterday afternoon after an Erika Bell home run lifted the Colonials past the Golden Grizzlies in a come-from-behind victory.

“We got run-ruled yesterday and had a sloppy couple of innings and they showed their resiliency,” Varner said. “Today we got their number one pitcher, and [Sydney] Campbell is good. We stayed the course and got our hits later in the game when we needed them, and that’s the mindset. Somebody is going to pick it up and somebody is going to get it done.”

Riggle started the day strong in the top half of the first, getting Oakland’s Cammie Brummitt to fly out to center. After allowing a base knock to Madison Jones, she was caught stealing thanks to a beautiful throw by catcher Erika Bell.

Jamie Squires led off the second inning with a deep shot to left field and cleared the fence easily, giving the Golden Grizzlies a lead early on in the contest, a lead they would hold until the late innings.

After Campbell put up a zero in the bottom of the fourth, Oakland started off the top of the fifth with two straight bunts with Maci Brown laying down the first and Jessie Munson right behind her advancing her to second base. Rachel Zerona grounded the ball to second, which allowed Brown to advance to third then later score on a passed ball.

In the bottom half of the inning, Erika Bell started the inning strong with a single then was pinch ran for by Ariana Garroway. Charlotte Grover got the Colonials on the board with a double down the left-field line, making it a 2-1 game.

Rachael Rhinehart grounded the ball to the right side of the infield, pushing Grover to third. Pinch-hitter Catalina Saxen drove in the tying run on a groundout.

Both teams made quick work out on the field in the sixth inning and Madison Riggle set down Oakland in order in the top half of the seventh.

To lead off the inning in the bottom half, Erika Bell striped one into right for a single, then Charlotte Grover grounded a single into right, and Danielle Jason moved the runners to second and third on a sacrifice bunt. Pinch-hitter Avery Winchell walked off the game by reaching first base on a throwing error by third baseman Madison Jones.

Dana Vatakis (5-4, 3.08) was in the circle for the Colonials to start game two and set the Golden Grizzlies down in order in a painless top half of the inning.

Oakland sent Chelsea Wiggins (0-2, 2.14) to the mound, who didn’t have as much success as Vatakis in the first as Kristyna Mala worked a five-pitch walk to lead off the inning for Robert Morris, and even with the Colonials loading the bases with one out, Wiggins escaped the jam.

The game played scorelessly through four, but the Colonials finally broke the ice in the bottom of the fourth thanks to some timely hitting and bounces. Danielle Jason legged out her second infield single of the game with one out in the inning. Alaina York’s single moved Jason to third.

That single paid big dividends for Robert Morris as Jason came into score on a Kristyna Mala line-drive single. A Faith Miller sacrifice fly made it 2-0 and Natalie Higgins scored Mala with her team-leading 28th run batted in.

Vatakis shut down the Golden Grizzlies over the remaining innings, scattering hits but not allowing any runs.

After a painless top half of the sixth, Kristyna Mala took Gracey Henckel deep down the left-field line for her first career home run to give the Colonials some insurance. After the home run, Sydney Campbell came in relief for Henckel and got out of the inning, her fourth appearance of the series.

Varner talked about Mala’s development as a hitter over the course of her career at Robert Morris.

“Her freshman year, she was swinging right-handed and was not a slap hitter, but she approached me about doing it and I told her to give it a shot,” Varner said. “She proceeded to hit .412 in conference play and made the All-NEC Rookie team. In her sophomore season, she got hurt then came back her junior year and she was not as confident in her right-handed slap, but she’s good and there was a patch where she was struggling. This Tuesday she found [her stride] and has been great.”

Oakland tried to make a comeback in the top half of the seventh, getting a runner on first and second with two away in the inning but did not cash in.

The Colonials won the series three games to one, besting one of the top teams in the conference. Varner spoke on the team’s success in their first season in the Horizon League.

“It’s big, especially when you want to make a statement that we are here to play,” he said. “Especially after getting a win off of Campbell, and it’s big to show that you got a win off of one of the top pitchers in the conference.”

Up next for the Colonials, they take on Horizon League bottomfeeder Purdue Fort Wayne on Friday and Saturday in Fort Wayne, Indiana. Both days will feature doubleheaders.