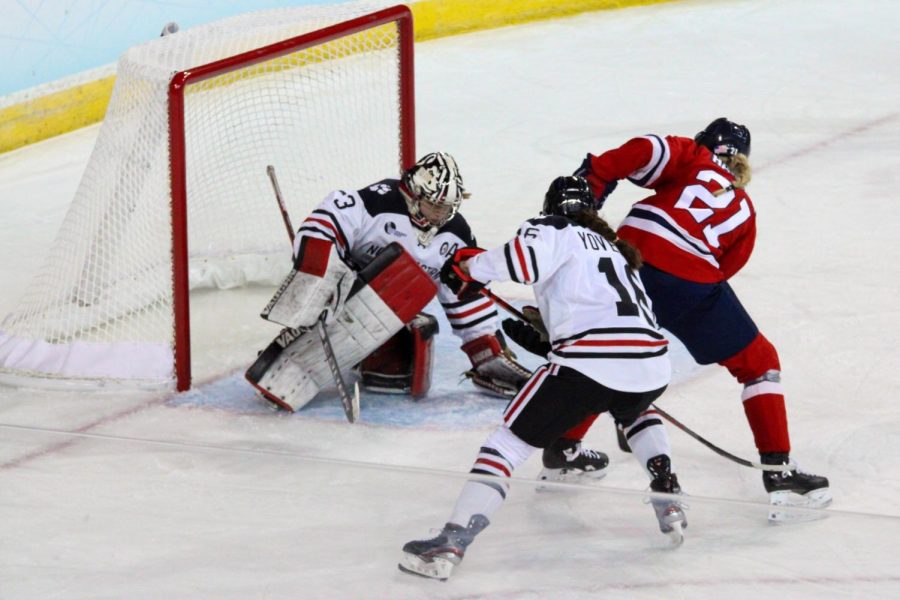 Aerin Frankel stops a shot from Kyleigh Hanzlik, one of her 20 saves on the day. Photo Credit: Nathan Breisinger

ERIE, Pa.– For the third time in program history, RMU women’s hockey has entered the NCAA tournament and has been eliminated in the first round. The Colonials fell to the Northeastern Huskies 5-1 Monday afternoon at Erie Insurance Arena, ending their season.

The Huskies were led by superstar defender Skylar Fontaine who finished the game with two goals and an assist. Emily Curlett tallied the Colonials’ only goal, scoring on the power-play late in the second period. Raygan Kirk did what she could with 41 saves on 46 shots, but the no. 1 Huskies were simply too much for the Colonials.

This loss caps off a historic season for RMU, having won their third CHA Championship. Since 2013, the Colonials have won the CHA regular-season title in three-straight seasons, produced three NWHL draftees, had a player lead the CHA in scoring five times, and have made it to the NCAA tournament three times. Robert Morris is slowly but surely becoming one of the more established schools for women’s ice hockey.

Northeastern entered this game as a juggernaut and the top seed in the tournament, only having one loss in the regular season to Boston College. Star forward Alina Mueller finished the regular season with an astonishing 35 points in 22 games played and the Huskies came out of Hockey East, one of the best divisions in women’s hockey.

Early on in the first period, the Colonials’ only chances were coming from simple dump-and-chase plays. Ellie Marovsky hit a post and Kyleigh Hanzlik had a good chance in the slot but Aerin Frankel stood tall in net, finishing the game with 20 saves. RMU would go to the power-play at 7:30 in the first, but no momentum was gained as Chloe Aurard scored shorthanded to open up the scoring for the Huskies.

In the second, and for the rest of the game, head coach Paul Colontino shortened up his bench rolling primarily his first two lines and defensive pairings. The game also started to become very physical with Curlett and Michaela Boyle getting involved.

After some small spurts of sustained pressure by RMU, Northeastern added to their lead with Fontaine scoring her first of the day. Fontaine outraced the Colonials defense in a footrace and slid a puck right underneath Kirk.

The game continued to be physical, but a little too many extracurricular activities caused Northeastern’s Mueller to end up in the box and RMU was sent to the power play. Curlett fired home her signature slapshot past Aerin Frankel for the Colonials’ first-ever goal in NCAA tournament play.

This was only the 15th goal all season that Frankel had given up. This point for Curlett also put her at 92 career points, which is only one away from tying Maggie Lague for the all-time leader in points by a defender.

RMU made it a one-goal game in the late stages of the second period but it was short-lived. With only three seconds left in the period, Mueller scored for Northeastern following a questionable icing call on Robert Morris.

This would be the dagger for RMU, killing any momentum that was gained from the Curlett goal that put them within one. In the third period, Katie Cipra scored on a slick backhand play after a brutal defensive turnover.

Northeastern clogged up the neutral zone and close things out with another chip-in goal from Fontaine and win 5-1. The Huskies will play the winner of Colgate and Minnesota Duluth for the first round of the Frozen Four.

RMU finished the season with a 16-8-1 overall record, as CHA Champions, and with NCAA experience they will never forget. Entering this season, there was not a single player on the roster that had won the CHA title.

It will be interesting to see how the roster will look next season as all seniors on the current team have another year left of eligibility. Freshman Ellie Marcovsky will look to take the next step, as well as depth forwards such as Maggy Burbidge, Marah Wagner, and Joelle Fiala.