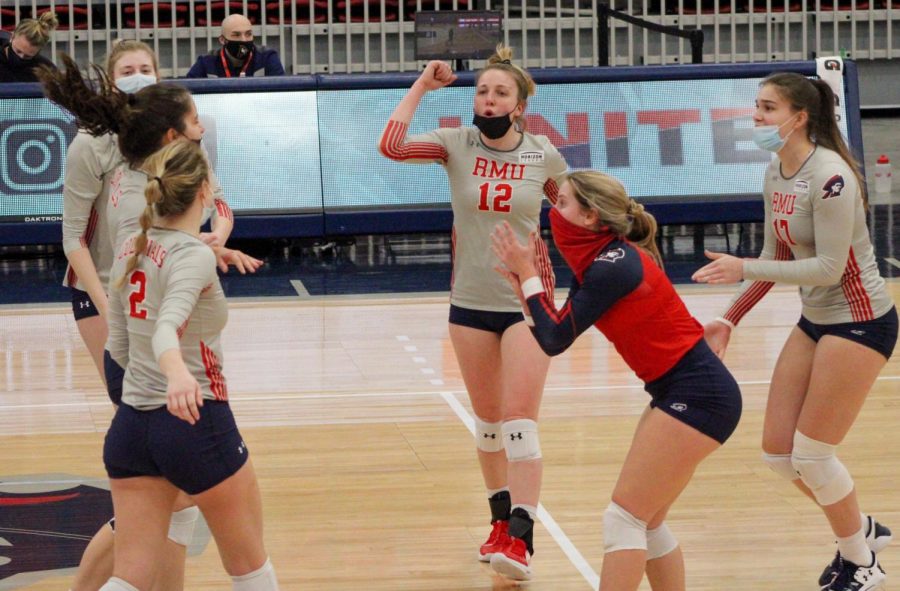 Voleyball celebrates recording one of their points in their victory over IUPUI. Photo Credit: Tyler Gallo

MOON TOWNSHIP– Fresh off of their first-ever Horizon League victory on the road, RMU volleyball looked to stretch their win total to two when they took on the IUPUI Jaguars, returning home to the friendly confines of the UPMC Events Center.

After dropping the first set of the evening, the Colonials (2-11, 2-11 Horizon) adjusted and won the next three sets over the Jaguars (0-9, 0-9) to double their win total on the year.

Head coach Dale Starr had to substitute starters Emma Granger, Whitney Brown and Alyssa Hudak after the team’s slow start in the first set, believing that it sent a message to the team.

“[The start] had to do with the fact that we were playing a team that didn’t have any wins, and we figured we could cruise,” Starr said. “I reminded them that we were 1-11, not 15-0 and leading the conference. [IUPUI] was seeing us as their only shot to win a game for the rest of the year. I can’t remember the last time I had to pull Emma, Whitney and Alyssa, but I did it to make a point that when they aren’t ready to play, they aren’t ready. I thought our bench did great tonight.”

Set one did not start the way the Colonials wanted, falling behind 11-4 and making five errors. Starr called a timeout to try and settle down the team, but the Jaguars continued their barrage for a brief moment. Following this, the Colonials clawed their way back into the game, but the original deficit proved to be too much as IUPUI took the set 25-18 with Millai Madison putting the final nail in the coffin on a kill.

Robert Morris seemed to be rejuvenated after the first set break, coming out with different energy and forcing an IUPUI timeout up 7-4. Similar to the Colonials, the Jaguars rushed their way back into the game, and after another Starr timeout, the score was 17-15 RMU.

A brief lapse for RMU persisted and IUPUI tied the game, but the Colonials exited set two with a 25-20 victory thanks to an emphatic kill by Alyson Londot.

The Colonials once again came out on fire in the third set, going on a 10-5 run into the first media timeout. Even after IUPUI made a comeback, Robert Morris eked out another win, taking the set 25-18 and moving one set win away from two consecutive Horizon League victories after dropping 11 straight.

In the fourth set, the early goings were hotly contested as IUPUI carried a slim 9-8 lead after RMU mounted a small comeback and drove a timeout from IUPUI. The timeout didn’t suppress the Colonials’ offensive attack as they snatched the lead away and made IUPUI take another timeout.

More time in the set allowed IUPUI to hang around, battling back to tie once more at 17. However, Robert Morris righted the ship after their lull on offense, notching the 25-19 set victory after Maria Alfano’s match-winning kill and winning their second-straight Horizon League game.

In the match, three Colonials set season-highs with their performances. Alyson Londot had a season-high 15 kills, Megan Cannon recorded a season-high 31 assists, and Maria Alfano notched eight blocks for her season-high, reaching 301 total blocks in her career and passing Leah Dunivan (2013-16) for eighth all-time.

Londot mentioned the team’s sluggish start and noted that someone needed to step up, which happened to be her tonight.

“We started slow, so I had to bring some energy,” Londot said. “We were quiet and things were tense, so someone had to start the intensity. We put pressure on ourselves [in the first set] when we just needed to play relaxed.”

The Colonials will play the Jaguars again tomorrow at 5 p.m.