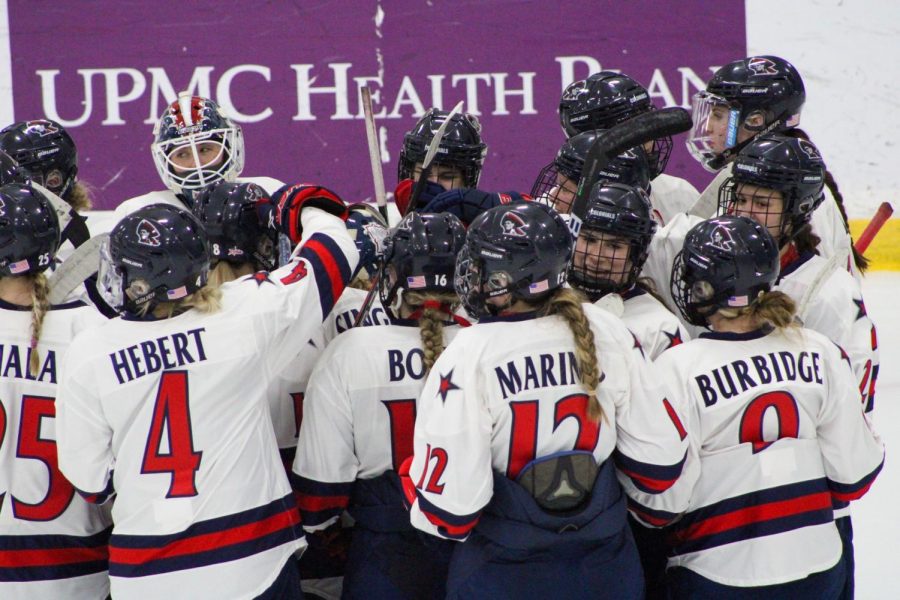 Women's hockey has a tough task at hand when they take on top-ranked Northeastern in the NCAA tournament. Photo Credit: Tyler Gallo

ERIE, Pa.– The Robert Morris women’s hockey team is back in Erie just a week after winning the CHA championship in the same arena, and this time, they look to become the NCAA champions. This will be a very challenging task as they will face no. 1 ranked Northeastern at 2:00 p.m.

The Colonials have finally been able to crack the top ten in the USCHO rankings after becoming CHA champions, and this season, their record was 16-7-1 overall and 11-7-1 in the CHA.

Just last Sunday, the Colonials were up in Erie where they faced the Syracuse Orange. The Colonials secured the CHA title after a barnburner where they won 1-0. Gillian Thompson got the game’s only goal in the first period, and that’s all Raygan Kirk and the defense needed because she didn’t let anything in. Lexi Templeman and the rest of the Colonials’ senior class finally got the ring they have been just short of for the past three years.

Northeastern will be the Colonials’ most difficult opponent to date as they are the top-ranked team in the nation. They finished their 2020-21 season with a great record of 20-1-1 overall and 17-1-1 in-conference.

After suffering a loss to another team in the tournament in Boston College, the Huskies went on to win the next few games in addition to suffering their only tie of the season. After that, they’ve only added to their win column. They won the Hockey East tournament with ease as they defeated New Hampshire, UConn, and Providence in the finals by scores of 7-0, 2-1, and 6-2 in a scorched-earth campaign. The Huskies are very skilled in all three zones and prove on the ice why they are number one as well as one of the favorites to win the NCAA tournament.

Maggy Burbidge (RMU) – Burbidge had herself a great weekend in Erie last weekend and looks to put up the same numbers she did this week. She was the overtime hero against Mercyhurst, recording an assist on the lone goal in the CHA title game.

Raygan Kirk (RMU) – Kirk missed some time late in the season, and was thrown into the fray last week. Her first start since February 17th was the CHA championship game. Although she hadn’t played, she showed no rust as she picked up a shutout. Kirk is part of one of the best goaltending trios we’ve ever seen at RMU, so if she doesn’t get the start, you can always trust DeSmet or Singewald to be just as good.

Alina Mueller (NE) – Mueller has been putting up numbers that make goalies shiver. She has 11 goals and 24 assists in her 22 games she has played this season. She has also taken over 100 shots this season, which is 30 more then anyone else on the Huskies. Mueller looks to lead the Huskies into the Frozen Four.

Aerin Frankel (NE) – Without a doubt, Frankel has been the best goaltender in the NCAA all season. She has a .969 save percentage and has only given up 14 goals all year. If Colonials want a shot at moving on, they will need to solve her and solve her quickly.

The Colonials look to make the Frozen Four for the first time in program history, and when you look at this team, it’s not surprising that they are where they are. They all believe in one another and it’s only one game in March, so upsets are uncommon. With that being said, I’m not going to give my score predictions this week, but I’ll once again wish these ladies the best of luck.