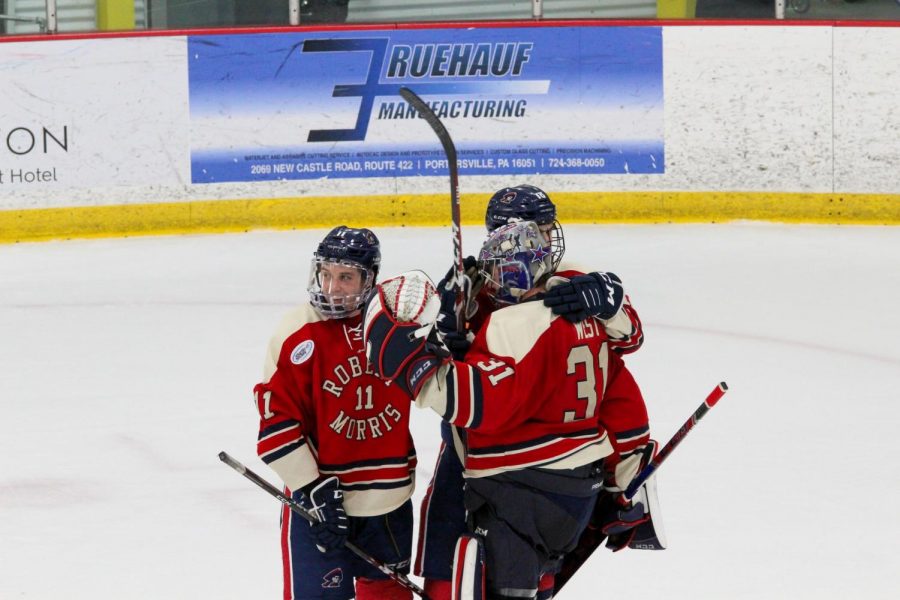 HENRIETTA, N.Y.– After a week’s rest, the no. 19 Robert Morris men’s hockey team is back on the move as they travel to the Gene Polisseni Center in Henrietta, New York for an Atlantic Hockey date with the RIT Tigers (7-7-2, 5-5-1).

In those games against the Sharks, it was all Colonials as RMU outscored their opponent 8-1 on the weekend. Nick Lalonde led the Colonials with two goals and two assists in the series, while Noah West and Dyllan Lubbesmeyer both started a game – with each netminder making 28 saves in their respective victories.

Hosting this weekend’s contest is the RIT Tigers, who are riding a three-game losing streak headed into the matchup. In their last series, they were swept by their in-state rival Canisius (7-2-0, 7-2-0), losing game one 5-3, and being shutout in the second game 3-0.

The lone bright spot for the Tigers on the weekend was sophomore forward Caleb Moretz, who scored two of the Tigers’ three goals. RIT was also making a habit of heading to the penalty box, as they took 11 penalties on the weekend.

In the second game on January 3, the Colonials jumped out to an early 3-0 lead and were able to trudge on despite a strong push by RIT. The Colonials won 4-3.

Nick Prkusic (RMU) – Prkusic, a senior from St. Albert, Alberta, has been a leader for the Colonials this season, both in points, and leadership ability. A captain on the team for the past two seasons, Prkusic is also tied for second on the team with 20 points (5g, 15a)

Freshmen (RMU) – Apart from Matt Hutton (who has only played in two games) and goalie Noah West, every single member of the freshman class this season has scored a point.

With Randy Hernandez tied for second on the team in points with 20 (8g, 12a), it is easy to overlook the impact that the young guns have had on this season. Defenseman Brian Kramer has 11 assists from the back end, and earlier this season against RIT, Matthew Guerra had a goal and two assists to lead the Colonials in the series.

Will Calverley (RIT) – In 14 games with the Tigers this season, Calverley has quietly been one of the best players in college hockey. The junior forward’s 20 points (10g, 10a) in 14 games puts him at a 1.43 points-per-game pace, second in the NCAA behind Cole Caufield of Wisconsin (who was drafted 15th overall by the Montreal Canadiens in 2019), who is scoring 1.50 points/game.

Penalty-Kill Scoring (RIT) – Just by looking at the numbers, the Tigers’ penalty kill doesn’t seem to be that scary, going 49/61 (80.3%), which is tied for 24th in the nation. However, when RIT is down a man, they have scored four goals, which is tied for second in the NCAA.

The Colonials freshmen squad will combine for six points on the weekend.