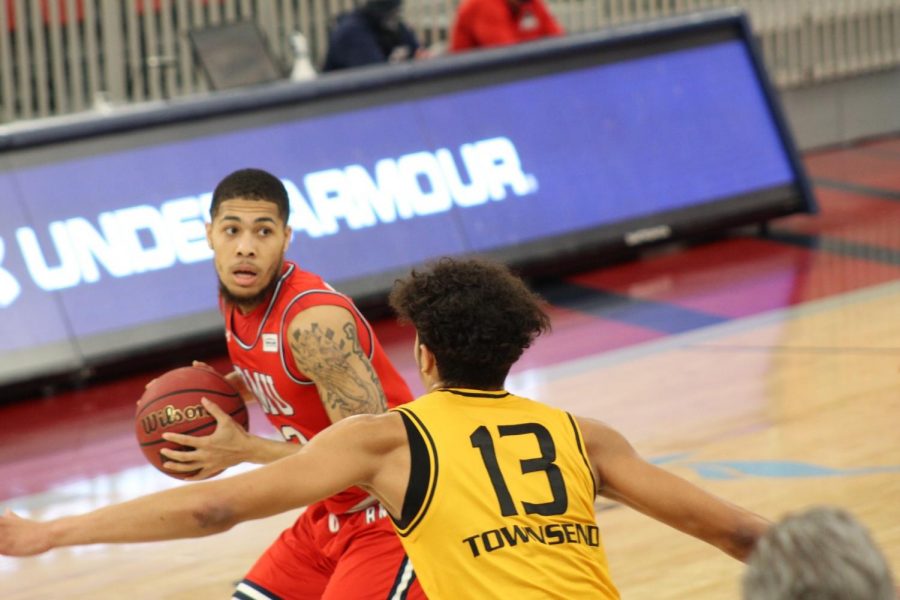 Despite mounting a big comeback, the Colonials couldn't hold off Oakland as they fell 86-81. Photo Credit: Ethan Morrison

MOON TOWNSHIP– On Saturday evening, the men’s basketball team took on Oakland for their final home game of 2020-21. It came less than 24 hours after snapping an eight-game losing skid in double-overtime on Friday 88-82.

In a senior day showdown, Oakland (9-16, 9-9 Horizon) knocked off the Colonials (4-12, 3-10) 86-81 in a game the Colonials never led. Andy Toole was not angry with the effort but noted that the unforced errors during the game needed to be ironed out.

“We made a lot of unintended errors, and being down [as much as we were] in the first half, it will be hard for any team to recover from that,” Toole said. “Part of [fixing those] is intent at practice. It’s mostly a mental thing… and our guys need to learn that.”

The teams traded buckets in the early moments of the game, but Oakland snuck out to a 14-6 lead by the first media timeout. Rashad Williams picked up where he left off from outside in game one, sinking a pair of threes to put the Golden Grizzlies up by eight.

The Colonials’ fortunes would not turn following the timeout, as Oakland capitalized on inopportune bounces to stretch their lead to as much as 12 at one point.

However, seven quick points by Jon Williams, Dante Treacy and Cameron Wilbon made the game much closer by the next timeout, slimming the deficit to six as the teams went back-and-forth. A missed Oakland shot caromed out-of-bounds off Daniel Oladapo and the score remained at 21-15 Golden Grizzlies by the break.

Rashad Williams continued to flex his muscles from outside, sinking two more three-pointers. A Zion Young triple brought the Oakland lead to 15 midway through the first half.

As the half wound down, both teams continued the trend of heavily utilizing the three-ball. Oakland continued to run away with the game, leading 35-18 at the under-eight media timeout.

The last four minutes were a tale of two halves for the Colonials, who could not get a bounce for the first two minutes but Oakland fouls and shaky play allowed them to continue to chip away at the deficit. A three from Jon Williams and five points from freshman Pat Suemnick brought the game as close as seven. Oakland led 46-35 at the end of the half.

Both teams shot 46-percent overall, but the three-ball was the key in the first half as RMU shot 57-percent from outside and Oakland had a round 50-percent mark. Rashad Williams, who shot 4-7 from deep, had 14 points while the two Colonials seniors, Charles Bain and Jon Williams, each contributed nine points in the first half.

After a sluggish start to the second half, triples by Treacy and Jon Williams trimmed the Oakland lead to single-digits. Oladapo charged Wilbon and the score was 52-42 Golden Grizzlies at the first media timeout of the second half.

The Colonials hung around through the middle minutes, finally getting bounces to go their way. Treacy notched a layup to bring the Oakland lead to six points. The action slowed a bit after, as the ball changed hands a few times, and after a Micah Parrish charge, the score was 56-50 at the next media timeout. Although they were hanging tough, RMU still had a big mountain to climb.

Scoring went dormant following the media timeout as both teams struggled to hit shots on strong defensive possessions for both sides. The score remained 56-50 midway through.

Oakland flipped the script and began to regain control of the game, lengthening their lead to 12. Jon Williams scratched some of those points back on two triples, including one via his patented pump-fake. Oakland still led 67-58 at the next media timeout.

Kahliel Spear slammed home an alley-oop pass following the timeout and a Trayden Williams reverse brought the score as close as five. Oladapo missed a pair of free throws and Trayden Williams attacked the basket as the Colonials continued to mount the comeback. Jon Williams added a three to extend his season-high in points to 19.

The Colonials began to fade away in the waning minutes of the game. Rashad Williams continued his unconscious shooting from beyond the arc, nailing two three-pointers and expanding the Grizzlies’ lead to 12 once more.

Despite an all-out effort in the final minute, including drawing fouls and a step out-of-bounds by Oakland, the lead was too much for the Colonials to overcome, falling 86-81.

In the senior day loss, a senior that shined was Jon Williams, recording a season-high 22 points in the final home game of the season. He spoke on his performance and how he thinks of it as just another game.

“I don’t go into every game expecting to get 20 points,” he said. “Stepping up when I’m asked to is a big part of it… I’m happy my teammates gave me chances. I was proud of our [effort] in trying to come back.”

RMU will be back in action for their final series next weekend when they travel to Detroit Mercy.