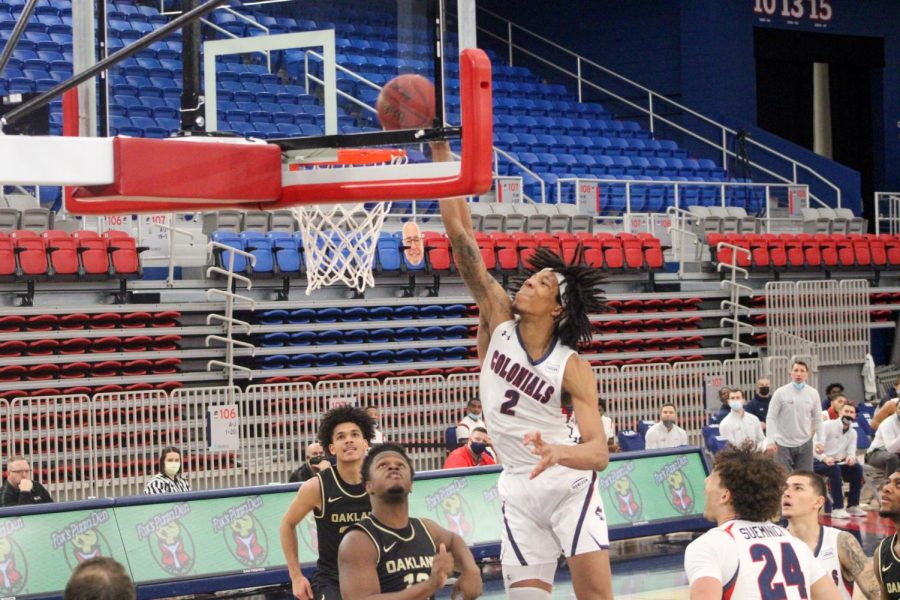 MOON TOWNSHIP Pa.– While the major news of the evening was that star forward AJ Bramah entered into the transfer portal on Friday, there was still a game to be played as Robert Morris (3-11, 3-9 Horizon) opened their final home series of the season against Oakland (8-15, 8-8). The Colonials picked up a hard-fought double-overtime victory 88-82.

Head coach Andy Toole was proud of his players’ effort during the game.

“Incredible battle… a complete effort by our guys, making plays,” Toole said. “We were able to make stops and I was proud of our guys and how they fought.”

Both of the teams traded baskets to start the game but freshman guard Kam Farris had the hot hand early on knocking down two three-pointers. At the first media timeout, RMU led by three points.

Oakland struggled from three-point land early in the first half and was unable to hit from downtown in their six attempts.

Robert Morris controlled the pace of the game and by the under-12 media timeout, they increased their lead up to five.

The Golden Grizzlies regained their footing and battled back from that small deficit and took a slim two-point lead. But that was erased quickly thanks to a Kahliel Spear flush to knot the game up at 20 apiece.

Out of the media timeout, Oakland went on a 13-4 run thanks to some superb shooting from the outside from Rashad Williams.

When it seemed as if RMU was in a downward spiral and struggling to find an answer on the offensive end, Enoch Cheeks drilled a triple, and on the next and last offensive possession of the half for the Colonials, Jon Williams nailed a three-point jumper to cut the Golden Grizzlies lead to just three points at the end of half number one.

Kahliel Spear and Enoch Cheeks led Robert Morris in scoring at the half, each contributing nine points. Oakland guard Rashad Williams led the attack for the Golden Grizzlies with 14 in the opening half shooting 40-percent from the field and 50-percent from beyond the arc.

To start the second half, the Golden Grizzlies capitalized on the sluggish play by RMU, jumping out to a nine-point advantage early on.

The Colonials were resilient, however, and fought hard to get back in the game. They cut down the Oakland lead to just two points at the 9:12 mark thanks to some timely defensive stops and some impressive guard play by Enoch Cheeks, who was doing it all, knocking down from the outside and capitalizing on some fast-break opportunities.

The Golden Grizzlies remained hot shooting the ball and continued to be a thorn in the Colonials’ side as they were up 71-66 with 3:29 to go in the contest.

After Trayden Williams hit a mid-range jumper with 1:19 to go in the contest, Dante Treacy stole the inbound pass and promptly nailed a three-point jumper to tie the game in the waning moments.

On the next defensive possession for the Colonials, they played stout defensively forcing a shot-clock violation setting up Robert Morris for the final possession.

Jon Williams could not get the final shot to fall and once again RMU was headed to overtime for the fifth time in the last six series.

Early on, Oakland’s Micah Parrish was sent to the charity stripe and put the Golden Grizzlies up by two.

Parrish showed up on the scoresheet again later in the extra frame extending the Grizzlies’ lead to three points.

Charles Bain, who had been struggling with his shot all season, nailed a triple to knot the game up once again.

Daniel Oladapo rushed right back down the court and gave the Golden Grizzlies a two-point advantage.

Even with all the pressure on Jon Williams, trailing by two, he hit both free throws to tie the ballgame back up.

The Colonials had another splendid defensive stand, but Jon Williams did not get his mid-range jumper to fall and that meant double-overtime.

Robert Morris won the tip-off to start the second extra frame and capitalized on their opening possession thanks to a Cameron Wilbon two-handed flush. A few possessions later, Dante Treacy knocked down another three-point shot extending the Colonial lead up to five.

RMU kept the pressure up high on both sides of the ball, not giving an inch. With the Colonials up by two with 57 seconds to go, a missed layup by Jon Williams was finished with a putback by Kahliel Spear, putting the Colonials back up by four. Dante Treacy put the finishing touches on the game with two made free throws.

Overall on the day, Robert Morris shot the ball at a 50-percent clip while Oakland managed 37-percent from the field. From downtown, RMU shot a keen 48-percent while Oakland struggled with the long-range shot shooting just 29-percent.

These two teams will meet tomorrow at 5:00 p.m. right back at the UPMC Events Center.