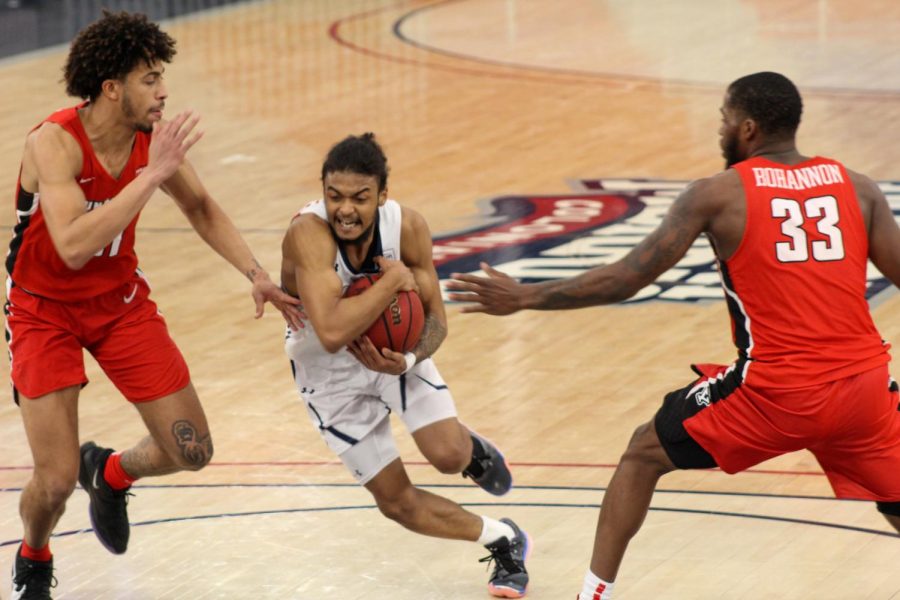 MOON TOWNSHIP– The RMU men’s basketball team was in search of a series split of the Youngstown State Penguins on Saturday night after dropping an overtime thriller 81-76 on Friday, a game that featured two buzzer-beaters by Jon Williams.

The Colonials (3-11, 2-9 Horizon) had more late-game magic in them during this game, but YSU (10-10, 6-10) escaped with a narrow 70-66 victory in yet another overtime contest and a series sweep. The Colonials have now lost eight games in a row.

Coach Toole was frustrated after two heartbreaking overtime losses in a row and four in the last four series, but he lobbied that the team needed to use these games as a learning experience and not simply put these losses in the rearview mirror.

“It was a bad case of deja-vu [tonight],” Toole said. “We talk about how there are two ways to learn, the easy way and the hard way, and we’re learning the hard way right now. If you just put everything in the rearview mirror, you don’t learn a lesson from it. We are continually learning the same lesson.”

The Penguins came out guns-a-blazing from the opening tip, playing to a 6-0 lead by the under-16 media timeout on the strength of a pair of Naz Bohannon layups. Despite missed shots from the Penguins, the Colonials similarly missed shots, missing their first seven before Jon Williams ended the scoring drought with a step-back jumper.

The Colonials began to mount their comeback following a quick seven points by Garrett Covington. A beautiful reverse-layup assist from Enoch Cheeks to Cameron Wilbon cut the Penguins’ lead to five by the under-12 timeout.

Covington stretched his points total to 11 before being subbed out. Enoch Cheeks hit a three and Trayden Williams got a friendly roll, but the Colonials were still unable to get the game closer than five points, trailing 22-16 with a shade under six minutes remaining in the half.

Kahliel Spear got the score to within two after handling a pass from AJ Bramah. Kam Farris sunk a corner three and Trayden Williams scored a second-chance bucket to get the score to within one, the closest it had been all game to that point. A Darius Quisenberry contested layup made the score 26-23 by the next media timeout.

An Alex Vargo three-pointer lengthened the Penguins’ lead to five once more. This half was highlighted by the ‘Guins’ foul trouble as the Colonials continued to hang around. Quisenberry dominated on both sides of the ball in the late portion of the half, scoring seven points, grabbing three rebounds and dishing three assists.

The first points of the half belonged to Bramah as he nailed a jumper to bring the deficit back to five. YSU started to pull away by the first media timeout, leading 42-31 at the break as the Colonials’ early second-half woes continued.

After the timeout, the Colonials’ fortunes began to turn, as Trayden Williams and Dante Treacy knocked down three-pointers to get the deficit down to five and the score to 44-39 at the next media timeout.

Neither team would score for another few minutes as both sides engaged in a blocking battle until Bramah hit a jumper to bring the score to within three. Strong defense from the senior led to stronger output on offense for RMU, bringing the score to 46-42 by the under-eight media timeout.

Treacy fed a phenomenal alley-oop pass to Bramah who finished it off, and Farris notched a triple to get the score down to three once more. The game continued to go back-and-forth, and Bramah got nearly tackled on the way to a basket, bringing the score within one, forcing Calhoun’s hand again.

After the timeout, the Colonials started to click. A Cameron Wilbon steal and Jon Williams three-pointer gave the Colonials their first lead of the ballgame, leading 52-50 at the next media timeout. YSU scratched a few buckets during the comeback by RMU, including two by Quisenberry.

As the teams traded leads in the final two minutes of the game, Myles Hunter got the Penguins’ lead back to four with a jumper. As the Colonials battled back, Cameron Wilbon hit a layup in the dying seconds of the game, tying it up with 1.1 remaining and sending it to overtime for the second straight night.

Trayden Williams got the scoring going with an early in overtime. The teams traded buckets again following this, and Quisenberry put the Penguins in front by nailing both free-throws and drawing a charging foul from Bramah. Bramah would join Spear in fouling out of the game as the Colonials fell 70-66.

While Jon Williams was the hero last night, a different Williams shined in this game, as Trayden Williams scored a career-high 16 points. He spoke about how the career-high in points was bitter-sweet.

“It was good [to score that many], but obviously it would have been better in a win than a loss,” Williams said. “We have to come back with more fire-power against Oakland.”

The Colonials will return next weekend to the UPMC Events Center when they host Oakland (8-15, 8-8) looking for a different result.