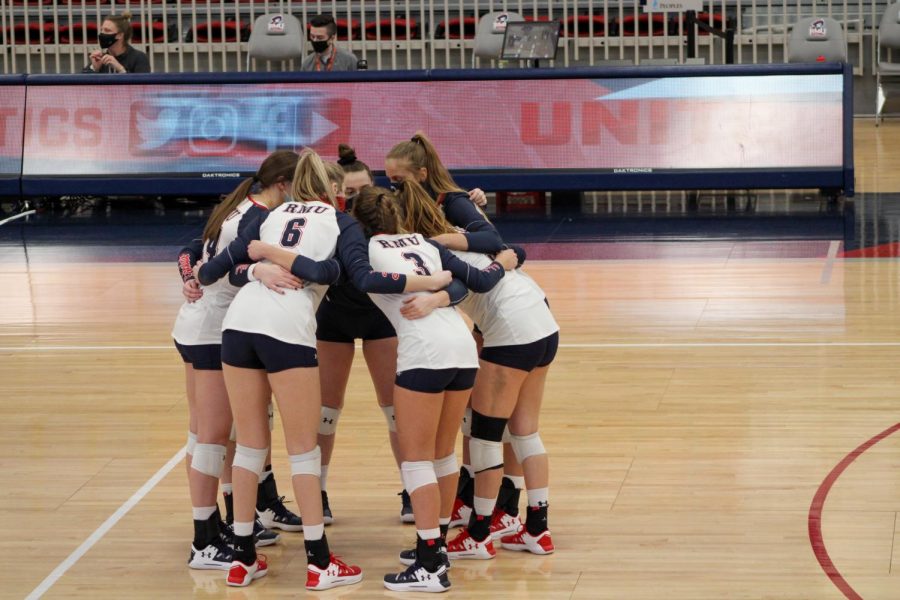 MOON TOWNSHIP– Robert Morris volleyball (0-1, 0-1 Horizon) returned to action for the first time since they were knocked out of the Northeast Conference Tournament 431 days ago by the Central Connecticut State Blue Devils on November 22, 2019, taking on the Oakland Golden Grizzlies (1-0, 1-0) for their first Horizon League matchup. In the Monday night matchup at the UPMC Events Center, Oakland pulled away in five sets, winning 3-2.

In warmups, the Colonials received a huge blow to their team as star middle blocker Emma Granger appeared to injure something in her leg, limping off the court with a coach. She returned to the court but spent the rest of the game on the bench with her leg wrapped. Maria Alfano, also a star middle blocker for this team, was held out of this game as well.

Head coach Dale Starr knew it would be tough without Granger and Alfano, but was proud of how the team stepped up in their absence.

“[Oakland] scouted us to have [Maria and Emma] before the game, so they were thrown into a loop too without them playing,” Starr said. “I thought Skylar [Clements] and Emma Brown stepped up. I was proud of the effort, despite some mental lapses it was good. You can expect that, especially with the youth of the team, and with how long we have been out of playing. Tomorrow, we should be in better shape.”

That appeared to not be a problem for the Colonials in the first set, matching the Golden Grizzlies point-for-point during it. They started the set on a 9-5 run highlighted by consecutive Alyssa Hudak aces, but Oakland furiously came back to tie things at 11. A timeout by Dale Starr did not do much to slow down Oakland, who, after RMU got out to a 17-12 lead, tied it back up at 17. The teams once again traded points in the late goings of set one, but the Colonials were able to snatch the first set after an Annie Monaco kill, winning it 28-26. Oakland’s players led most of the single-set statistics, including Brittany Welch, who recorded five kills and 5.5 points to lead the way for both sides. Alyssa Hudak was close behind Welch with five points of her own.

The Golden Grizzlies adjusted following that first set, storming out of the break with an 11-3 run and never looking back. RMU could only watch as the Golden Grizzlies cruised to a 25-12 victory in set two. Even an RMU timeout after those 14 points could not slow down Oakland. Through set two, Brittany Welch still led the way in points and kills, totaling eight for both. Hudak was still close in points with seven. Whitney Brown was able to garner a lead in the assists category, adding another nine assists to stretch her total to 18 on the night.


The second set signaled trouble was brewing, but Starr made sure that the errors in that set would not haunt them again in another set.

“We made a lot of unforced errors in that second set,” he said. “We didn’t have any energy or effort, and I thought we did a better job of that in sets three, four and five. If we clean up those errors, we will have a great shot to win tomorrow.”

Oakland did not coast to a victory as easily in the third set, as Robert Morris hung around throughout. By the first media timeout, the Golden Grizzlies clung onto a 15-13 lead. However, although the Colonials brought it within one, they were never able to overcome the deficit, falling in the third set by a score of 25-22. Patti Cesarini, who finished off the Colonials in this set with an ace, tied Brittany Welch with 11 points to share the lead in that category. Whitney Brown added 10 assists to lengthen her total to 28.

The Colonials would not go down quietly, going on a 6-4 run to start the fourth set and forcing Oakland coach Rob Beam’s hand, making him take a timeout. This set was back-and-forth right until the end, but the Colonials were able to pull it out 25-23 and knot the match up at two thanks to a set-clinching ace by Alyssa Hudak. Patti Cesarini claimed the lead in kills and points with 15 apiece, while Whitney Brown added another six assists for 36 on the night.

Back-and-forth was the name of the game in the fifth and final set. Oakland began it with an 8-5 run, which made Dale Starr take a timeout to stop the bleeding. This seemed to work for a while, as RMU mounted a comeback, getting the game to within one but ultimately falling 15-11 in the final set as the Golden Grizzlies took control following another Dale Starr timeout.
Final Statistic Leaders
Kills: Patti Cesarini/Brittany Welch, Oakland, 16 / Abby Ryan, RMU, 12

RMU will be back in action against Oakland tomorrow at 5 p.m. hoping for a different result.