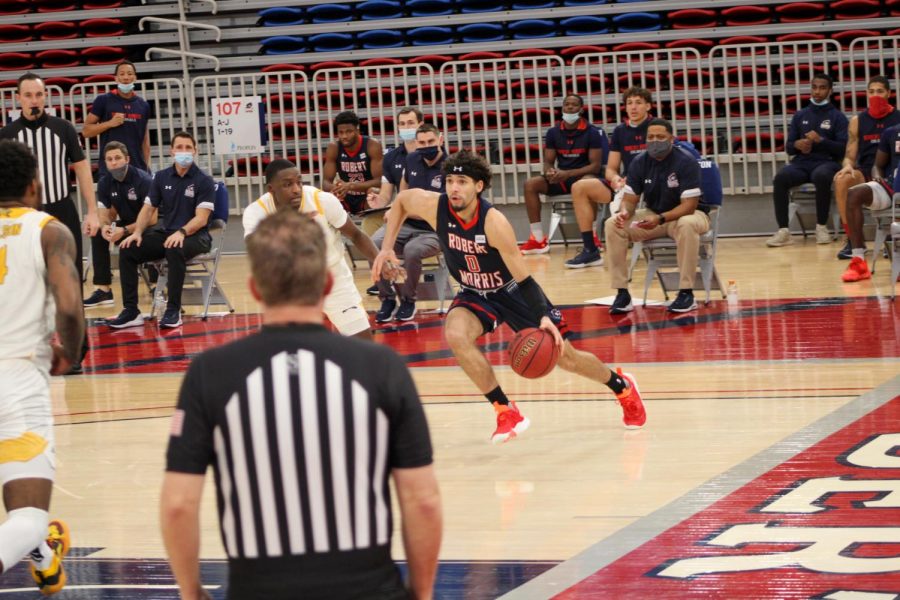 MOON TOWNSHIP, Pa.– Robert Morris (3-7, 2-5 Horizon) looked to split the series against Northern Kentucky (7-8, 5-5) on Saturday evening, but after a strong first half, the Colonials faltered in the second and overtime periods dropping the game 79-74.

Head coach Andy Toole said after the game, “There were certainly better parts and better effort, but we struggle with some of the details that you need to beat a good team with good players, and good coaches. So when we don’t stay locked in bad things happen to us.”

After last night’s contest against Northern Kentucky, Coach Toole expressed that the defense needed to be a lot better for them to compete in ball games.

Robert Morris kept the pressure on both sides of the ball which made Northern Kentucky take yet another timeout down by 10.

Charles Bain also got in on the action on the offensive side of the floor, shooting 75% from the field and knocking down his first three-point shot in over a month.

By the under-12 media timeout, the Colonials were shooting 9/10 from the field and 4/4 from beyond the arc.

Out of the media timeout, RMU kept hold of its 10 point advantage until just about under five minutes to go in the half.

The Colonials defense began to lapse in the later stages of half number one as Northern Kentucky took advantage of the Robert Morris miscues, cutting the lead to four.

That then forced Coach Toole to call their first timeout with the half with just over two and a half minutes to go.

Toole said, “We went to our bench and that was when we had a letdown defensively and that led to them getting back into the game.”

RMU held onto their four-point lead after 20 minutes of play.

Kam Farris led the Colonials in scoring in the first half, putting up nine points. The freshman from Burlington, Vermont was 3/4 shooting from the field and the perimeter.

Northern Kentucky had a pair of guards lead the team in scoring. Adham Eleeda and Marques Warrick both had nine points for the Norse in the half.

To start the second half, both teams traded baskets for the first couple of minutes, but Robert Morris held their lead of five points heading into the first media stoppage of the second half.

NKU put together a mini-run in which they tied the game heading into the second media timeout thanks to scoring from Adham Eleeda.

Then the Norse took the lead momentarily going up by two points with 9:22 to go in the game. But that lead was quickly erased thanks to a Jon Willams three-pointer which put the Colonials back on top.

RMU and Northern Kentucky continued to trade shares of the lead for the next couple of minutes after the under-eight media timeout.

Neither team would give an inch down the stretch especially the Colonials, who had stout defense and forced a shot clock violation after an amazing defensive possession which Robert Morris then took advantage of to pull ahead by two points with 2:28 to go in the game.

Then with less than a minute to go in the game, Northern Kentucky tied up the ballgame with 45 seconds remaining.

On the next possession for Robert Morris, Kahliel Spear made it to the charity stripe. He went one-for-two from the line which put the Colonials up one.

AJ Bramah came up huge on the next defensive possession coming up with the steal, Northern Kentucky then had to foul.

Trayden Williams then went to the charity stripe and also went one for two, which put the Colonials up by two.

On Northern Kentucky’s next possession they tied the game thanks to a Bryson Langdon layup which sent the game into overtime.

Robert Morris won the tip in the extra frame but were unable to come out with anything in their first two possessions; that allowed Northern Kentucky to take a five-point lead early in overtime.

RMU continued to struggle both offensively and defensively as Trayden Williams was blocked on back-to-back attempts trying for a layup. To add to their offensive struggles, Enoch Cheeks was hit with a traveling violation which gave the Norse possession.

Charles Bain cut the NKU lead down to three points down the stretch, but they could not trap Northern Kentucky which forced the Colonials to foul.

Trevon Faulkner was able to ice the game by hitting both of his free throws.

Overall in the contest, NKU shot 44-percent along with the Colonials. From beyond the arc, the Norse shot 30-percent while RMU on the other hand shot 47-percent.

The Colonials were led by AJ Bramah who had another solid outing going 6/13 from the field and shot 70-percent from the charity stripe which gave him 19 points on the day.

The Norse were led by Trevon Faulkner once again as he put up 18 points in the winning effort shooting 3/14 from the field and 2/7 from long range. He did most of his work down at the charity stripe as he was a perfect 10/10 on the night.

The Colonials will be looking to get off their losing skid next Friday as they take on the Wright State Raiders. The tip is scheduled for 9:00 p.m. on ESPNU as a part of #FridayIsHLMBB.