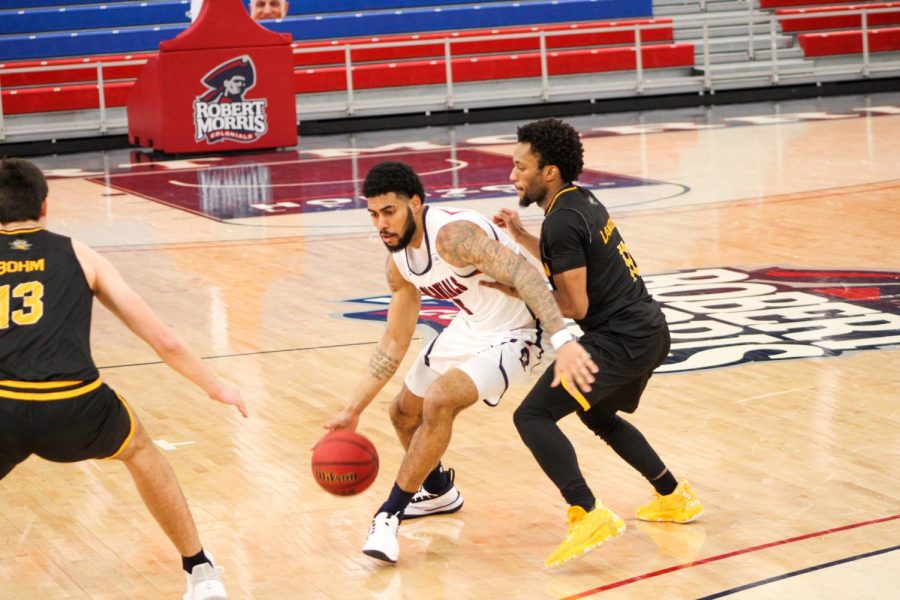 MOON TOWNSHIP, Pa.– Robert Morris (3-6, 2-4 Horizon) and Northern Kentucky (6-8, 4-5) faced off at the UPMC Events Center Friday night. The Colonials tried to end their two-game skid but were unable to get the job done falling to the Norse by a score of 81-76.

Head coach Andy Toole said after the game, “We didn’t have any answers on the defensive side. We have to attack the defensive side of the ball and figure out how to get stops because that’s what did us in tonight.”

Early on in the contest, both teams got off to a fast start as Kam Farris put up a quick five points to begin the evening.

By the first media timeout, the game was tied at seven apiece.

Both teams continued to trade blows back and forth through the second media timeout.

Later in the first half, AJ Bramah continued to show why he is one of the top talents in the Horizon League as he was able to finish off a monster dunk in transition.

In the next possession, he was able to emulate what he just did by registering yet another dunk.

For the cherry on top, he was able to cap off a 10-2 run with a fadeaway jumper to put the Colonials up two points heading into the under-eight media timeout.

Just when it seemed like Robert Morris had all the momentum on their side, the Norse didn’t back down as they kept pace with the Colonials through the rest of the half. RMU took a two-point lead into the break.

The first half of the contest was very clean, only seven fouls were committed on both sides.

Bramah led the way for Robert Morris putting up 18 points in the first half. Along with Bramah, Kam Farris put up 10 points.

The Norse were led by Marques Warrick as he put up seven points for NKU in the first half. Bryson Langdon led the team with seven rebounds.

Northern Kentucky was able to outperform Robert Morris on the glass, outrebounding them by three.

To kick off the second half, Marcus Warrick knocked down a three-point jumper for NKU. Jon Williams then answered with a triple of his own.

Both teams continued to trade baskets until just under 12 minutes remaining in the game. The Norse started to pull away thanks to Marques Warrick scoring inside and out.

Northern Kentucky was able to put on an impressive run which put them in the lead by 11. Coach Toole saw enough and called a timeout to stop the bleeding momentarily.

The Colonials responded well out of the timeout as they were able to cut into the NKU lead bringing it to as close as three points with 7:39 left to go in the game.

The Norse once again was able to go on another small run to push their lead back up to eight.

NKU would hold onto their sizable lead until the 1:05 mark of the second half, which is where things started to get interesting. Jon Williams was able to hit a triple to bring the Colonials within 11. Then Robert Morris pressured NKU into committing a traveling violation.

With possession favoring RMU junior guard, Dante Treacy was able to knock down his third three-point shot of the contest which put the Colonials within striking distance, and with 46 seconds to go, the Colonials were only down by six.

Robert Morris was able to force Trevon Faulkner into yet another traveling violation, which led to Dante Treacy heaving up a triple, but it was unable to fall which allowed the Norse to regain possession and with that, the Colonials sent Marques Warrick to the line which he then put the game out of reach.

It was a rough second half for the Robert Morris defense as they allowed Northern Kentucky to put up 50 points.

Along with that, the Norse shot 72-percent from the field along with 57-percent from downtown in the half. That was a huge turnaround from the numbers that they put up in the first half.

Overall for the Colonials, they shot 45-percent from the field and 36-percent from beyond the arc, which was a much better percentage from what they shot last weekend at UIC.

As for the Norse, they shot 58-percent from the field and 39-percent from three-point range on the night. They also were more active on the glass outrebounding RMU by five.

The Norse were led by both Marques Warrick and Trevon Faulkner who both put up impressive numbers in the victory. Warrick registered 20 points and three assists and Faulkner put up 18 points and five assists.

Robert Morris was led, once again, by none other than AJ Bramah. Bramah had yet another impressive game logging 27 points, six rebounds, and five assists. Coach Toole spoke about Bramah’s performance and was proud of how he has performed this season.

“AJ was super active… he put up big numbers on the offensive side but he had a couple of defensive breakdowns that hurt us at times,” Toole said. “He’s carrying a crazy load so it’s a challenge. We just need to shore up on the defensive side of the ball.”

The backcourt had a bounceback day after a rough series last weekend as Kam Farris and Jon Williams each put up 13 points in the loss and Dante Treacy registered nine points.

The Colonials return to action Saturday evening as they once again take on Northern Kentucky. Tip-off is Scheduled for 5:00 p.m.