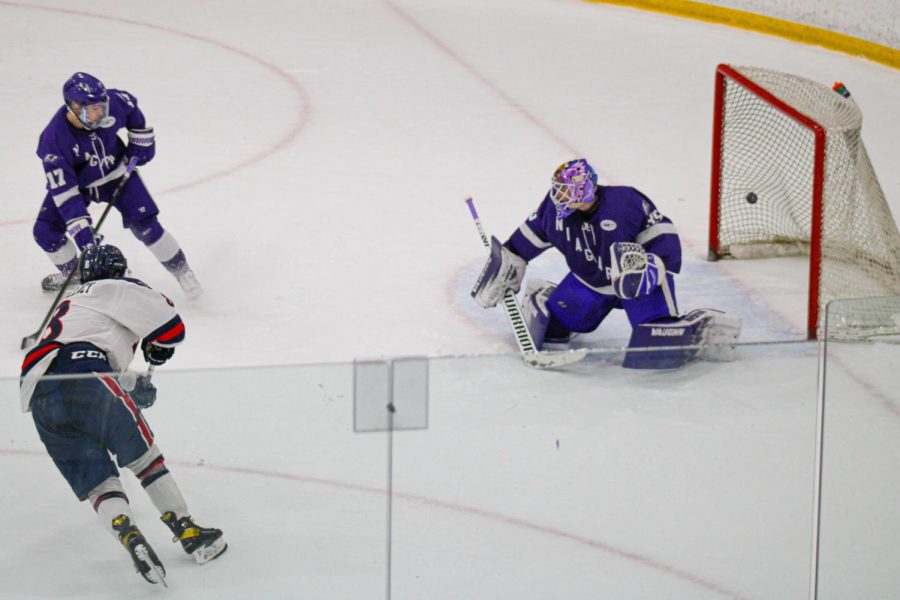 “They’re a good hockey and we’ve had back-to-back overtime games where we found a way to get the job done,” head coach Derek Schooley said.

Both squads came out with their dancing shoes as they were flying around the rink, however, neither team could gain an edge after trading chances back-and-forth. The Colonials and Purple Eagles swung and missed on each of their lone power-play opportunities in the opening period.

The stalemate was broken in the second stanza as the floodgates opened early with the Colonials striking first. Kyler Head registered the first collegiate goal of his career after redirecting a point shot from Brendan Michaelian.

“Kyler Head, Gavin Gulash, and Cameron Hebert provided us a lot of energy and with that energy, it just built some momentum,” Schooley said.

Play intensified as both teams continued to generate scoring chances, yet, it was Niagara that capitalized next to tie the game up at one apiece. Ryan Naumovski won an offensive zone draw by pushing it ahead to himself and slickly sliding it over to Justin Kendall who tapped it into an open cage.

Niagara’s goal was evaporated just 23 seconds later as the Colonials responded swiftly with a high slot shot from Aidan Spellacy that popped out right to freshman David Lafrance, who buried his first career goal on the backhand.

“We’ve got a lot of mileage out of our freshman,” Schooley said. “We got other contributions from a lot of young guys.”

The ferocity in terms of scoring chances settled towards the end of the second frame, but the chippiness increased with several penalties and talking between the two sides setting up an eventful third period.

It was a highly anticipated final 20 minutes of play with both teams showing their offensive capabilities in the prior period, but Niagra took control early in the third frame. Ryan Naumovski, upon zone entry, found a streaking Kendall cutting through the slot as he fired the biscuit past Noah West for his second goal of the evening.

For an extended period of time, Niagara continued to flex its offensive muscles and pepper West with shot after shot when finally they took the advantage on the score sheet. Ludwig Stenlund grabbed a loose puck in front of the crease while dragging it to pull West out of position before he tickled the twine to give the Purple Eagles a 3-2 lead.

Niagara did not stop there as they kept the Colonials from producing any solid chances on a power play that quickly went haywire when Christian Gorscak, on a partial breakaway, let a fluttering shot go that tipped off of West’s outreached glove and fell into the back of the net.

“That was a tired hockey team in the third period. We were tired and we didn’t do a very good job of puck management,” Schooley said.

Following the shorthanded tally, Schooley decided to pull his starting netminder and replace him with Dyllan Lubbesmeyer. Whether the move was to create a morale boost or not, it most certainly worked in that fashion.

The deadly duo of Nick Prkusic and Randy Hernandez once again brought their team back to life as Prkusic directed a Hernandez corner pass in behind Michael Corson with under six left to play in the contest.

With exactly a minute to spare it was none-other than Hernandez to tie the game for the Colonials as he blistered a shot from the right-wing circle past an unsuspecting Corson to knot the game at 4-4.

“To be able to finish that play to tie it… that’s a dynamic freshman that we haven’t seen the likes of since Brady Ferguson,” Schooley said.

As Robert Morris forced overtime in the second straight game, they leaned on another unsung hero, this time in the likes of Aidan Spellacy. After some puck luck in the neutral zone, Spellacy picked up the biscuit and carried it in on a developing opportunity, and made no mistake beating Corson on his blocker side.

“We found a way to gut it out,” Schooley said. “We’ve got guys that are good offensive players and they made plays.”

With one game left on their season slate against Niagara, the Colonials turn their focus towards a season sweep of the Purple Eagles on Sunday. Puck drop is set for 4:05 p.m.