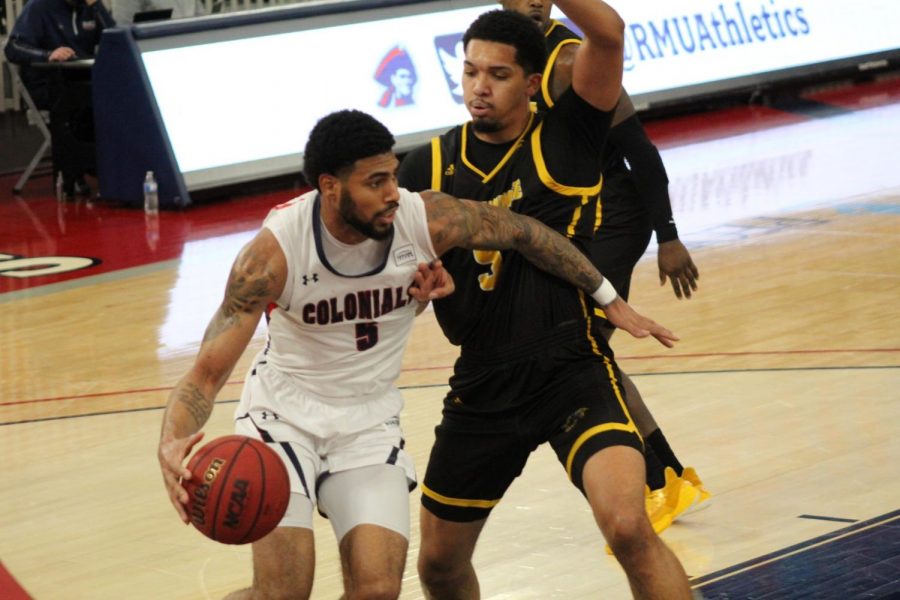 AJ Bramah picked up 20 points as the Colonials knocked off Milwaukee in the first of their two-game set. Photo Credit: Ethan Morrison

MOON TOWNSHIP, Pa.– After splitting the series against Purdue Fort Wayne (2-3, 1-4 Horizon), Robert Morris (3-3, 2-1 Horizon) looked to rebound from their performance last Sunday against the Mastodons. The Colonials did just that as they were able to fend off the Milwaukee Panthers (3-2, 2-1) by a score of 67-64.

One of the main storylines of the game was that Jon Williams and Dante Treacy did not dress due to COVID-19 protocols. That allowed Trayden Williams and Cameron Wilbon to start in their place. It was also noted that senior forward Charles Bain was out once again due to an ankle injury that he suffered against Marshall (6-2, 0-1 C-USA) on December 20.

After the game, head coach Andy Toole spoke about the team’s fight and resilience throughout the game.

“Obviously, a hard-fought well-earned win by our guys. Certainly, it was ugly, but in the end [of the first half], being up one point on the scoreboard was big for us,” Toole said. “A lot of guys stepped up for us and I liked the effort by our team.”

Both teams got off to a slow start as Robert Morris shot 33% in the early parts of the game. They took a three-point lead into the first media timeout.

The Colonials and Panthers both continued to struggle on the offensive side of the ball as the Colonials still had a lead going into the second media timeout.

There was an interesting sequence in the final few minutes of the half as Olisa Ngonadi blocked a layup from Milwaukee’s Josh Thomas leading to AJ Bramah being able to corral the rebound. Bramah would go coast to coast and finish with the layup that was arguably the best offensive play for the Colonials in the first half.

By the end of the first half, Robert Morris led 30-29. RMU looked a lot better on the defensive side of the ball, but they struggled from an offensive standpoint. At the half, the Colonials were just shooting 33% from the field. They also did not fare well beyond the arc in the first half as they shot just 14%.

As the second half began it looked like it would be a back and forth battle down the stretch. Grant Coleman got to get the Panthers on the board early in the first half as they took a two-point lead over the Colonials on the first possession of the half for Milwaukee.

After Trayden Williams tied the game with a mid-range jumper, Coleman dropped another triple to push Milwaukee back out in front of RMU.

With just under 18 minutes to go in the game, Trayden Williams missed a three-point jumper but freshman guard Enoch Cheeks snagged the rebound. Cheeks created contact on the way up and his layup fell through. He converted the and-one opportunity which allowed Robert Morris to take a 37-35 lead. RMU took a 41-40 lead into the first media timeout of the second half.

Bramah converted on a layup coming out on the first possession of the media timeout. After that bucket, both teams struggled to get any points as both teams went into a scoring drought for about two minutes before the Panthers’ DeAndre Gholston tickled the twine with a three-point jumper which knotted the game up at 43 apiece.

At the second media timeout, the Panthers were up 48-47 thanks to another basket by DeAndre Gholston.

Milwaukee was then staked to their largest lead of the game, which was six points before Trayden Williams cut the Panthers lead in half with a three-pointer.

Milwaukee kept their slim lead intact until Cameron Wilbon converted two free throws from the charity stripe. The game was all tied up at 59 with 2:27 left to go in the game.

On the ensuing possession for the Panthers, they retook the lead, but not for long, as Wilbon was active down low which allowed the Colonials to knot the game back up at 61.

A few moments later AJ Bramah hit a mid-range jumper to retake the lead which forced Milwaukee to take a timeout. The score was 63-61.

On the Panthers’ next possession, Te’Jon Lucas, the team’s leading scorer coming into this game, got pickpocketed by the Colonials’ junior transfer from Bucknell Kahliel Spear.

The Colonials built on their two-point lead thanks to a Spear layup and two Cameron Wilbon free throws, the lead was now at six.

It did not stay like that for long as Grant Coleman knocked down a triple which brought the lead back down to three with less than nine seconds left in the contest.

Milwaukee’s Josh Thomas threw up one last three-point attempt in hopes of it falling to tie the game up, but it did not. The Colonials then inbounded the ball and the game was over.

Overall for Robert Morris, a team that lost two of their starters due to COVID-19 protocol and one with an ankle injury, they were able to fight all game long and finish strong down the stretch.

AJ Bramah was on fire once again as he logged a team-leading 20 points along with 14 rebounds. That marks the senior’s ninth career double-double with the Colonials and his first of this season. Along with Bramah’s double-double, he put together another 20 point performance which is his fourth in the past five games.

As for Cameron Wilbon, a junior from Gary, Indiana struggled from the field shooting just 2-9 on the game but he hit at the charity stripe when it mattered, going six-for-seven from the line. Wilbon finished with 10 points, 9 rebounds and came up just one board short of his first career double-double.

Robert Morris is right back at it tomorrow evening as they look to finish off the series sweep Panthers right back at the UPMC Events Center. Tipoff is scheduled for 5:00 P.M and the game can be seen on ESPN3.