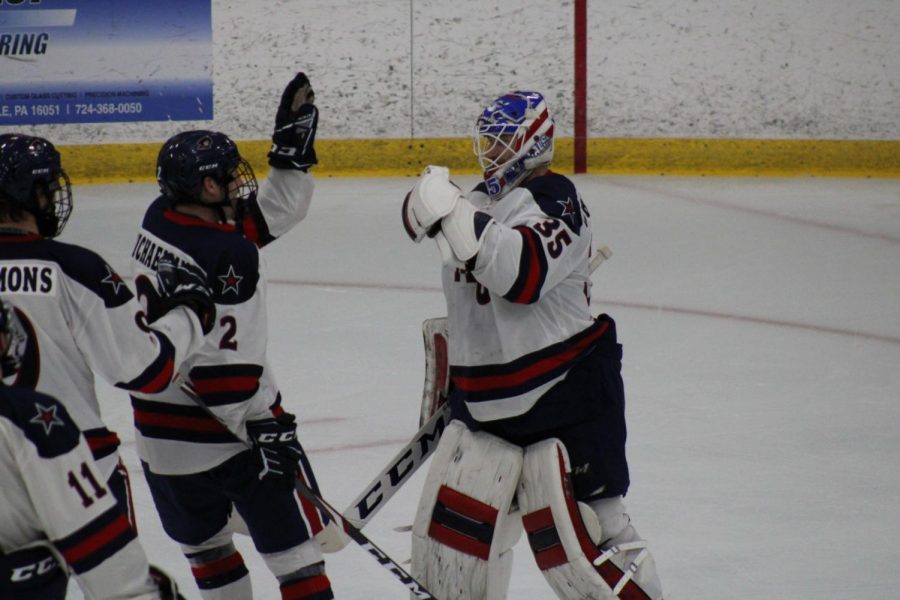 MOON TOWNSHIP — After starting their season off strong with a sweep of Alabama-Huntsville (0-2), the Robert Morris men’s hockey team (2-0) begins Atlantic Hockey action this weekend against the Canisius Golden Griffins.

The Colonials started their season off last weekend by sweeping the Chargers of Alabama-Huntsville by a combined score of 9-5. In the Colonials’ first game of the season, they flexed their muscles, scoring five goals in the third period to win 5-2. UConn transfer Jordan Timmons had three points in his RMU debut, including two goals.

In the second game between the two squads, it was much closer, with freshman Randy Hernandez scoring the game-winner for the Colonials with 7:11 remaining in the third period.

The last time the Colonials and Golden Griffins faced off against each other was February 22, 2020, where Robert Morris won at home 4-3. Over the course of four games last season, the Colonials won in all four games, including a shootout win at the LECOM Harborcenter in Buffalo. Overall, Robert Morris has a record of 21-10-4 against the Golden Griffins, and are 11-2-1 at the Island Sports Center.

Goalies (RMU)- Over the course of the weekend against the Chargers, Head Coach Derek Schooley relied on both of his elder netminders, starting Reid Cooper and Dyllan Lubbesmeyer; looking for a replacement for Justin Kapelmaster.

Both goalies played well for the Colonials against Alabama-Huntsville, with Lubbesmeyer playing in game one, allowing two goals on 13 shots, and Cooper getting the nod in game two, where he allowed three goals on 21 shots.

Also, a potential goalie to use for Coach Schooley is freshman Noah West. In 40 games last year with the NAHL’s Jamestown Rebels, West posted a 2.61 goals-against average and a .919 save percentage.

Kyler Head (RMU)- Head, a freshman from Malone, New York, was named Atlantic Hockey’s Rookie of the Week for his performance over the past weekend. Head earned his first two career points, both assists, in the first game of his career.

Before becoming a member of the Colonials, Head was a member of the New Jersey Titans in the NAHL, where last season, he scored 39 points, including 16 goals, in 46 games played.

Jacob Barczewski (CAN)- Only a sophomore, Barczewski recorded one heck of a freshmen season last year in net for the Golden Griffins. In 28 games played, Barczewski had a 2.92 goals-against average and a .905 save percentage, good enough for eighth among all freshmen netminders in the NCAA.

This season, Barczewski will likely hold the reigns to the starting spot in the crease for Head Coach Trevor Large’s Golden Griffins squad.

Niclas Puikkonen (CAN)- Despite being a freshman, Puikkonen comes to Canisius with a bit of professional experience. During the 2017-18 season, the Stockholm, Sweden native played two games in the Swedish Hockey League with Djurgårdens IF.

In the Colonials’ first foray into Atlantic Hockey play this season, it will be a tough task. However, due to the graduation of the top three Golden Griffin scorers, combined with the success that Robert Morris has had against Canisius at home, I believe that the Colonials sweep the series and move to 4-0 on the year.