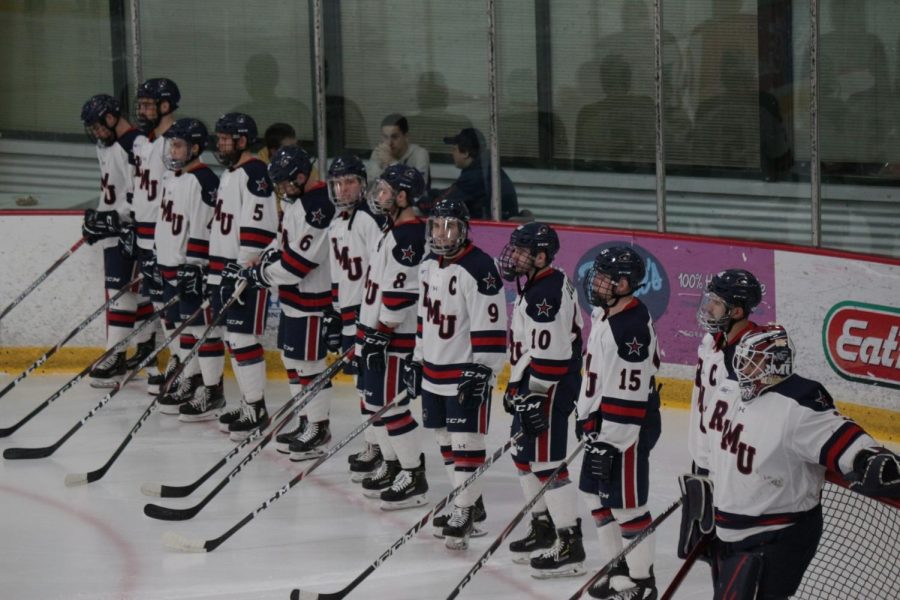 Men's hockey has released its schedule and is set to begin its season on November 20th. Photo Credit: Jonathan Hanna

MOON TOWNSHIP– On Monday morning, the men’s hockey team announced via Twitter the release of their 2020-21 regular-season schedule.

The Colonials have released their official 2020-21 schedule, a 28-game slate that includes 22 @Atlantic_Hockey matchups!

The 28-game schedule, which includes 22 conference matchups, will also see several major non-conference teams travel to newly-named Clearview Arena on Neville Island during the early portion of the season. These games include current WCHA member and former AHA foe Alabama-Huntsville to open the year (who’s former head coach Mike Corbett now sits on the bench for RMU as an assistant), the renewal of last season’s rivalry with Bowling Green (which saw the Colonials split their two-game series with the Falcons to open the 2019-20 campaign), and a pair of contests against Long Island University who, while not a member of the AHC, will begin their first season of Division I hockey as an independent member before choosing a conference.

The games for this season will be unique in that, to mitigate the spread of the coronavirus, Atlantic Hockey has announced that teams will play in two geographically based pods in the east and west, with Air Force being the only geographic outlier. The Colonials’ will be contained in the western pod along with Canisius, Niagara, Mercyhurst, and RIT, playing five games each against them and two games against Air Force.

Some important streaks will be squarely on the line this season. These streaks include RMU’s recent unbeaten record at home against Canisius, which will be put to the test in their first meeting on November 27 (the Griffins have not won on Neville Island since 2005), and their 7-1-1 record in their last nine games against Mercyhurst, which the Colonials will look to keep on the winning side of things in their first meeting with their I-79 rivals from Erie on January 19.

In a statement on rmucolonials.com, Schooley noted that, “to say our players and staff are excited to play on November 20th is an understatement…we are thankful to our administration and Atlantic Hockey for putting together a comprehensive plan for our safe return to play. I can’t say enough about our players who have made tremendous sacrifices to follow new guidelines to make this happen. Let’s drop the puck.”

RMU opens the year against the aforementioned UAH Chargers on Friday, November 20 at 7:05 p.m. on the Island.

To stay up to date on everything men’s hockey and all things Robert Morris athletics, be sure to visit our home page on this site and follow @RMU_CSN on Twitter.