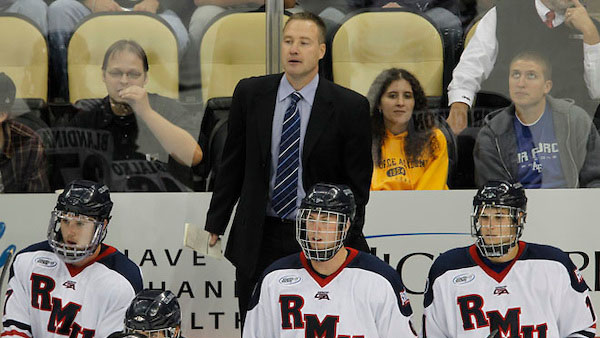 The Robert Morris men’s hockey team has added Mike Corbett to the coaching staff, the team announced on Thursday.

Before coming to Robert Morris as an assistant coach, Corbett was behind the bench of the University of Alabama-Huntsville Chargers since their inaugural season in 2013-14.

In a statement on RMUAthletics.com, Colonials head coach Derek Schooley said, “I called Mike immediately when this position opened, and I wanted to make sure that he knew we were interested in having him be a part of the Colonial program. We are ecstatic that he has decided to join us in Pittsburgh.”

Prior to UAH, Corbett was an assistant coach in Colorado Springs, Colorado with the Air Force Falcons. During his tenure with Air Force, the Falcons won five Atlantic Hockey Championships in  2007, 2008, 2009, 2011, and 2012, making an appearance in the NCAA Tournament quarterfinal in 2008-09.

In his playing career, Corbett was a defenceman for the Denver Pioneers for four years from 1993-1997. In 77 games played, Corbett scored two goals, 11 assists and 13 points.

In a statement about coming to RMU, Corbett said, “I am extremely excited for the opportunity to be joining the RMU coaching staff this season. Coach Schooley has done a very good job of building an RMU program that is in contention for a post season bid in Atlantic Hockey every season, and I look forward to working with Coach [Ryan] Durocher and Josh Johnson to continue that success. RMU has a strong tradition as well as a first-class athletic department, and together we want to continue that growth and put the program in position for success.”