Women’s basketball faces toughest test of the season in Emmitsburg 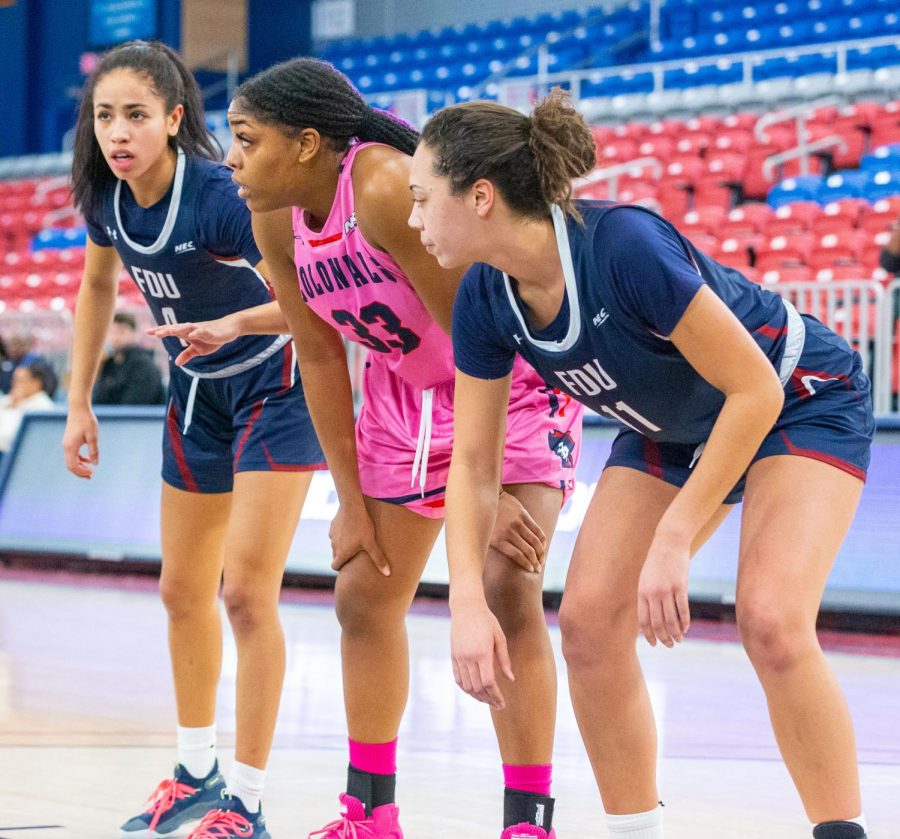 EMMITSBURG, MD– The Robert Morris women’s basketball team (20-7, 15-1 NEC) will face their toughest game of the season on Monday night against the team directly below them in the standings. The Mount St. Mary Mountaineers (19-9, 14-2 NEC) hosts the Colonials in a battle to crown the winner of the Northeast Conference’s regular-season title. This marks the second matchup between the two teams, with The Mount defeating RMU on the road 62-59 in a hard-fought battle on Feb. 21.

After dropping their second to last home game of the year to the Mountaineers two weeks ago, Robert Morris bounced back with a 48-35 victory over the Fairleigh Dickinson Knights (10-17, 7-9 NEC). The Colonials struggled offensively in New Jersey, shooting 32% from the field and 27% from behind the arc. RMU was also out-rebounded in the game and no one scored more than nine points in the effort. One thing that was constant for Robert Morris, like it has been all season, was the level of intensity on defense.

The Knights only shot 27% from the floor and 22% from three as Fairleigh Dickinson turned the ball over 20 times thanks, in large part, to eight steals racked up by RMU. Nneka Ezegibo and Isabella Posset both struggled to find good shots against FDU at home, combining for only 19 total points. Ezeigbo and Posset will be the key leaders for success if Robert Morris is going to come out on top.

The Mount has been playing phenomenal basketball in the second half of the season to put themselves in this position on Monday night. Winners of nine in a row, the Mountaineers defeated St. Francis (11-17, 9-8 NEC), 66-55, on Saturday afternoon to improve their road record to 9-6.

Their home record is spectacular, sitting at an impressive 9-2 and will play home to a difficult atmosphere for Robert Morris. After their game against RMU, Mount St. Mary’s will host Fairleigh Dickinson Thursday to close out the season. The Mountaineers have been riding increasing momentum every game in 2020 and have a great chance of not only winning the NEC regular-season title but the postseason tournament as well.

Freshman Dahomee Forgues performed the best offensively for Robert Morris against the Mountaineers on Feb. 21. Averaging only 5.6 points per game, she almost doubled her total with 11 in the Colonials loss. She should play well once again if RMU is going to win the NEC regular-season title.

Ezeigbo has played the best of any of the Colonials all year long and has showcased her special talent. The senior forward leads RMU with 13.7 ppg and has recorded 8.0 rebounds per game this season. The NEC player of the year candidate must perform at her finest to bring a victory back home to campus.

Agentowicz had a season-high 20 points against the Colonials in the first game between the two teams. Only averaging 4.9 ppg and 2.7 boards a game, the guard will look to once again find a way to play like she did against Robert Morris and not like the constant struggles she has faced against other NEC teams.

Harrison has been the most productive player from the guard position for The Mount in 2019-20. Only a sophomore, she is averaging a team-high 12.5 ppg and will be looked upon as the team’s best scoring option to take down the mighty Colonials’ defense once again.

This matchup between the Robert Morris Colonials and Mount St. Mary’s Mountaineers will come down to the wire to decide who wins the Northeast Conference’s regular-season championship. Even though the game is in Emmitsburg and The Mount is on a nine-game winning streak, the team who has played the best basketball all season long will come away with the victory. Robert Morris with their strong defense and timely playmaking will find a way to record another regular-season crown.