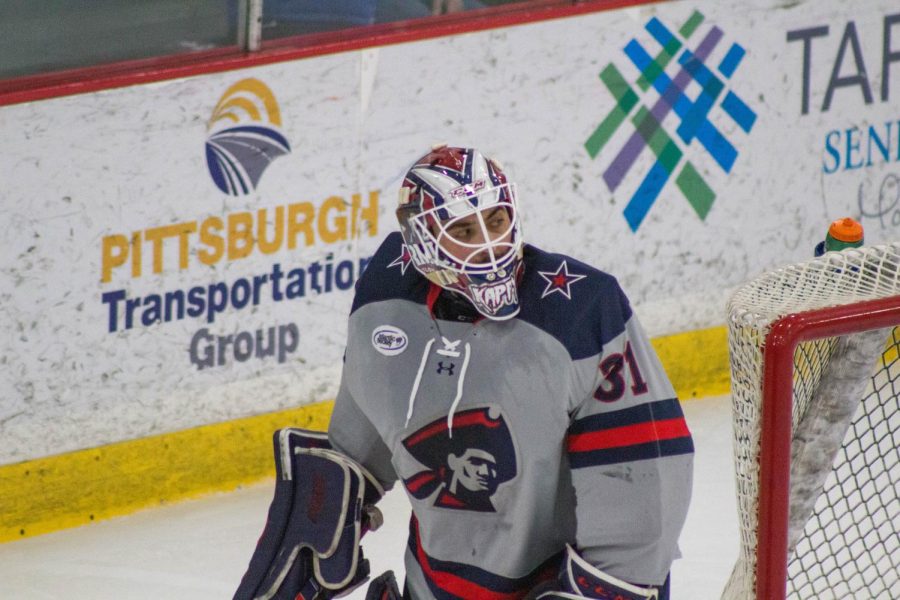 MOON TOWNSHIP– As the calendar turns from January to February this upcoming weekend, the final stretch of regular-season games for RMU winter sports is about to begin. Basketball, ice hockey and women’s track and field will all see action this week in addition to the men’s lacrosse team’s scrimmages on Saturday.

Starting with the first game of the afternoon, RMU men’s basketball will look to continue the success of Thursday nights’ 64-54 home victory over Bryant (10-11, 4-6 NEC).

The Colonials are only a game back of Merrimack (14-8, 8-1 NEC) of the top spot in the NEC but the Warriors are not eligible for the conference tournament so RMU would hold the top spot. Robert Morris needs to keep us the same success to be able to hold their own in the NEC.

Senior guard Josh Williams and junior forward A.J. Bramah lead the way for the Colonials in their last win and will continue to be if RMU is going to come out with another victory. Williams totaled the most points of the night with 21 and Bramah recorded 14 points and 16 rebounds.

Meanwhile, on the women’s side, success has come at a premium all-season long especially in conference play. Just like the men’s team, Robert Morris (13-6, 8-0 NEC) will face a lackluster Central Connecticut team (2-18, 1-8 NEC) at the bottom of the NEC standings.

RMU currently stands two games up on second-place Mount. St. Mary’s (9-11, 5-2 NEC), not facing The Mount until the last few weeks of the regular season. The Colonials crushed the Central Connecticut Blue Devils 86-56 in New Britain, Connecticut, to start the new year and will look to continue the success they found at home to end the Saturday slate on campus.

The defending NEC regular-season champs should hold there own against the Blue Devils and continue to prove their worth as the top team once again in the conference.

Senior center Nneka Ezeigbo is having a career season on the court in her final season at RMU. In the NEC alone, Ezeigbo is averaging 14.5 ppg and 8.0 rebounds per game. Sophomore guard Isabella Posset, who has taken a major step up this season, puts up 10.3 ppg and shoots 33% from behind the three-point arc.

The Robert Morris men’s lacrosse team returns to action on Saturday hosting Seton Hill and Denison. The matchups begin at 12 p.m. and 2:30 p.m., respectively, at Joe Walton Stadium. Top talent from the back-to-back NEC champions will return for the 2020 season including junior 52-goal scorer Corson Kealey and senior 40-goal scorer Ryan Smith. Another exciting season of RMU lacrosse is about to get started as the team chases three championships in-a-row.

Men’s hockey faces an uphill battle in Tempe, Arizona, vs. the Sun Devils

The RMU men’s hockey team (9-12-3, 9-8-3 AHC) travels to the desert over the weekend to play a tough Arizona State team (16-9-3) in Tempe, Arizona. This key non-conference matchup may be the most important series to date for the Colonials through the halfway point of the season.

The Sun Devils have had a very successful season in 2019-20 and present the Colonials with a team with a deep skillset and scoring ability. They are 8-2-2 at home, bring to light another obstacle that Robert Morris has to overcome.

Coming off back-to-back losses, RMU must rely on their defense and goaltending once again to have a chance of taking a game or two from Arizona State. The offensive unit needs to step up and score, especially if presented with odd-man situations and power play opportunities.

Junior forward Nick Prkusic needs to step up and play a big role in this game as he owns a team-high seven goals and 16 points. Goalie Justin Kapelmaster, who possesses a 2.41 goals-against average and .933 save percentage will also need to play strong over the course of the weekend.

The RMU women’s track and field may want to buy a second home in Youngstown as they will travel back to Ohio for their third of four meets so far this season. The YSU Mid-Major National Invitational will take place over the course of bot Friday and Saturday starting at 2:00 p.m. and 11:00 a.m. respectively.

Sophomore Tara Gologram and juniors Kaitlyn Hawkins and Yessie Valencia all competed well last weekend in the SPIRE Midwest Open and the team will look for similar success this weekend.

Stay tuned to the RMU Sentry Media website and social media pages to stay up to date on Robert Morris sports all weekend long.