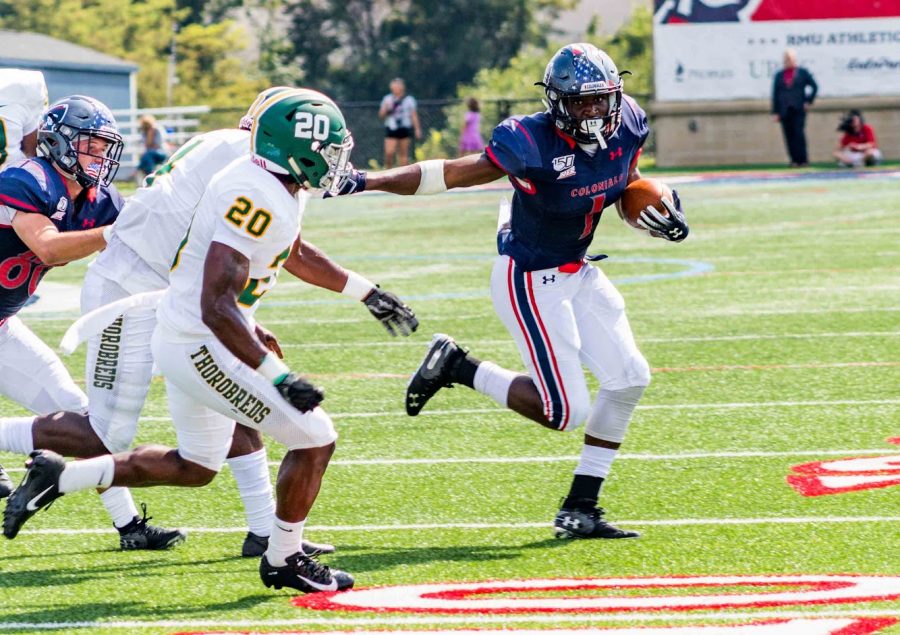 MOON TOWNSHIP — For the first time in nearly a decade, Robert Morris is playing meaningful football in November. The Colonials currently sit tied for first in the NEC with Central Connecticut State (8-1, 4-0 NEC) and Saturday’s opponent, Duquesne (6-2, 4-0). A win in each of the next two weeks clinches Robert Morris their first NEC title since 2010, something that would have seemed unimaginable given the team’s 0-6 NEC record in each of the previous two seasons.

That’s where head coach Bernard Clark Jr. has his Colonial football with just three weeks to go. Of course, the team’s toughest stretch is only now starting, with the Colonials closing the season with games against three of the top four teams in the NEC, but in just one season, coach Clark has equaled the conference win total (4) that the Colonials had from 2014-2018.

“Well I just think that it’s more along of what the guys have been doing,” said Coach Clark on bringing back a winning culture to Robert Morris. “The guys have done a great job of building the culture here. Those guys are really buying into each other, not so much as buying into me, but believing in each other, believing in one another and believing in things that we’re telling them. That always feels good.”

Duquense has been a thorn in Robert Morris’s side throughout the program’s struggles. Robert Morris last beat the Dukes in 2012, a 17-13 win at Joe Walton Stadium. Since then, Duquense has won four conference titles (2013, 2015, 2016, 2018) while Robert Morris failed to post a winning record.

A win would set multiple milestones for the Colonials. In addition to marking their first against their conference rival since 2012, a win would clinch their first non-losing season since 2010.

“I think the thing that’s been special to our guys,” said Clark. “We’ve done a few milestones along the way. In fact, we won an away game against VMI, those things were special to them. So I think they have that in the back of their mind, but the forefront of their mind is their just trying to win this game and stay focused.”

The Colonials will face-off against a Duquesne team without their starting quarterback as Daniel Parr left last week in third quarter with an injury. Duquesne will be starting fifth-year senior Brett Brumbaugh, who is making his first career start.

“Not really,” said Clark on if Parr being out affects their game plan. “They’re a team that has a lot of depth. I mean, coach Schmitt has done an awesome job of building a culture there, so the guy that comes in is going to be just as prepared as the guy that’s not there right now. That’s what they’ve been doing all year long. They’ve had some nicks and injuries here, but offensively and defensively guys have been prepared and ready to go.”

The Colonials have been comeback kids of late, as they have trailed at halftime in each game during this four-game winning streak. Robert Morris entered the 2019 season with a 16-106-1 (.134) all-time record when trailing at the half in program history. While getting off to a strong start would definitely improve their chances against Duquesne, Clark is more than confident that his team will finish strong despite how they play at the start.

“I think the thing is, make sure we’re finishing the game,” said Clark. “Of course we want to start of strong. What our guys have been doing a great job of is finishing the game and keeping their heads in it. And staying focused and making the adjustments that we need to make at halftime. Our guys know they got to start fast. Like I said, we got to be physical, we got to finish. We also understand that we need to maintain our composure throughout the game.”

With the game against Duquesne this week followed by CCSU next week, these next two weeks are the most important stretch of the season for the Colonials. Clark had a quick message for his team, to keep them from looking ahead to the game against CCSU.

“There is no tomorrow,” said Clark. “That’s our motto. We make sure we prepare for today. We’re not worried about anything in advance. We got to take it one day at a time, one play at a time and one game at a time. That’s it. So, our guys understand, there is no tomorrow. Let’s play fast, let’s play physical, let’s finish.”