Riverhounds eliminated in overtime at home for second consecutive season 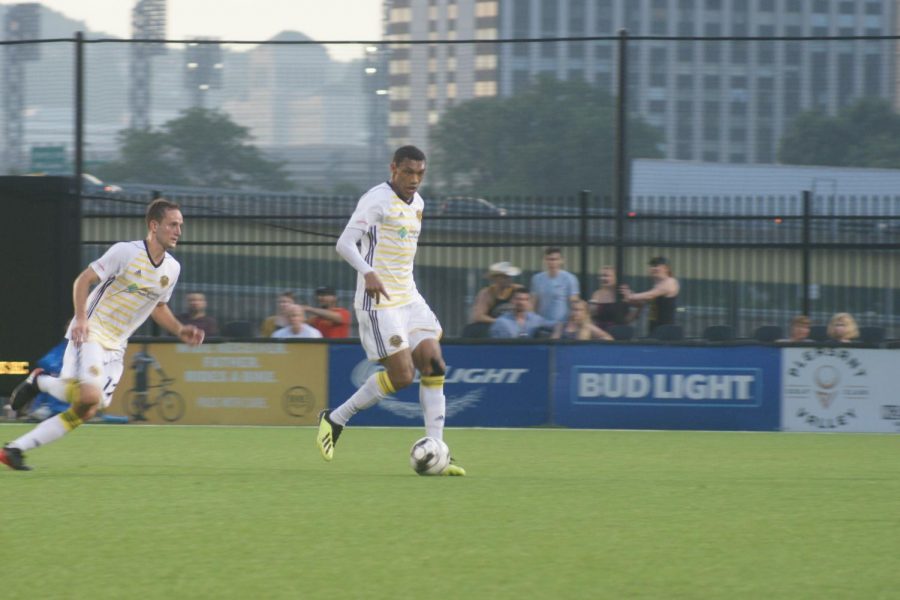 PITTSBURGH — A record 6,073 fans were in attendance on Saturday as the Pittsburgh Riverhounds SC fell to the defending USL champions Louisville City FC 2-1 overtime in the Eastern Conference semifinals. It was the third meeting between the two opponents, with the Hounds winning the first one and tying the second.

The Riverhounds started the game off strong, as they attacked the net shortly into the game. Ryan James fired off a shot that was saved at the upper left-hand corner of the goal by goalie Chris Hubbard. This set up a corner kick, which also set up the first Riverhounds’ goal. The goal was scored off the corner after Kenardo Forbes crossed it to Thomas Vancaeyezeele, who headed it in at the 11-minute mark.

The Riverhounds defense played strong in the first half, only letting up one real chance by Louisville. That chance came at the 34-minute mark when Louisville had a corner, headed out by Joe Greenspan.

Seven minutes later, the Riverhounds had another great chance to add to their lead when Kevin Kerr was fouled on the left side of the field. This awarded the Riverhounds a free-kick, of which Forbes took. The shot from Forbes shot barely sailed over the crossbar, and the score remained 1-0.

Two minutes later, Neco Brett fired a laser from the top of the box, but a diving Hubbard saved the potential goal. The ball ended up going out of bounds barely on the left side, so a throw-in was awarded to the Riverhounds instead of a corner kick. After the throw-in, Brett was called offsides, and that ended the Riverhounds chances in the first half.

As the game entered halftime, the Riverhounds led 1-0 over the defending champions. This was despite only having the ball for 34.8% of the time in the first half. They did they lead the game in shots (4-2) and shots-on-goal (3-0) though. The Riverhounds also trailed in passing accuracy (79.6%-68%) in the half.

Shortly into the second half, Joe Greenspan was awarded a yellow-card. This didn’t stop the Riverhounds though, as Brett got behind the Louisville defense at the 50th-minute. He had a wide-open, but the shot was stopped by a sliding Paco Craig. Interesting enough, this was Craig’s first game against the Riverhounds this season as he was suspended in the previous two.

This set up a quick turnaround for Louisville, as they quickly moved the ball to the other side of the pitch. Luke Spencer was able to score an equalizer for Louisville, and the score was tied 1-1 at the 50th-minute.

Approximately ten minutes later, Louisville came close to taking a 2-1 lead, but Spencer was called for a foul on the header as he ran into the goalie. This kept the score at 1-1 at the 61st-minute.

A collision at midfield caused Craig to be given a yellow card. The free-kick failed to deliver a goal and the score remained 1-1 at the 71st-minute.

Steevan Dos Santos was brought in to replace Kerr at the 74th-minute as the Hounds attempted a corner kick. This attempt would ultimately be unsuccessful.

At the 78th-minute, a ball was beautifully played to Louisville’s Spencer, but his shot went way over the net. The Riverhounds recovered after this, and Brett was able to get the ball deep into the box. Unfortunately, he couldn’t get the shot off and the score remained 1-1 at the 81st-minute.

Spencer received a yellow card at the 84th-minute. He was subbed out for Abdou Thiam at the 90th-minute. Three minutes of stoppage time were added at that moment, but neither team was able to score and the game went into overtime.

Kyle Morton made an incredible save on a breakaway in the 4th-minute of extra time to keep the score at 1-1. This set up a great transition, in which Forbes had a great shot just barely miss the net. The attack for the Riverhounds didn’t stop there though, as Hubbard held onto the ball for too long and Brett almost scored the tie-breaking goal.

Two minutes of extra time were added in the first overtime half. Thiam got behind Riverhounds defenders to fire off a shot that hit the right post. This kept the score at 1-1 as the two teams entered the second overtime period.

The Riverhounds used their second substitution in the 117th-minute, bringing in Mark Forrest for Jordan Dover. Louisville took advantage of the Riverhounds replacing a defender with the forward and scored shortly after. Paolo DelPiccolo scored the tie-breaking goal on Morton.

“Really frustrating,” said Vancaeyezeele. “You can see it going in and you can’t do anything about it. In my head I was like maybe we are going to score another one, but I couldn’t reach it, I couldn’t get it, really frustrating.”

The Riverhounds failed to score in the remainder of the game and for the second consecutive year, fell at home in overtime. It was also the first loss at home for the Riverhounds since they fell in the playoffs last year to Bethlehem Steel FC in penalty kicks last season. The loss is a bitter end to an otherwise positive season for the Riverhounds.

“It’s disappointing,” said Coach Lilley. “They had a great season. Didn’t play well tonight in any phase. When we hit crosses, the movement in the box wasn’t good enough. We didn’t pass the ball all night, just kicked it forward. That’s disappointing as anything.”