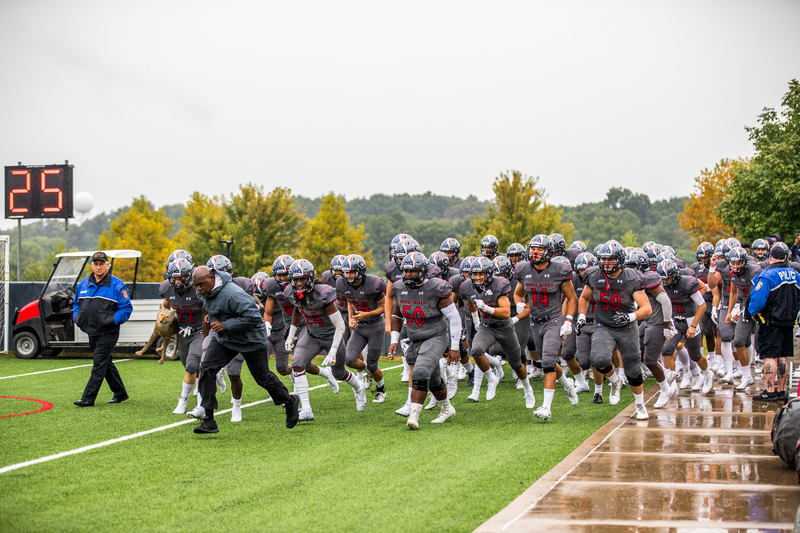 In the first quarter, the Colonials struck early as Terence Stephens, Jr. ran into the endzone for the early score. After that, the two teams got close to scoring but just could not create any chances. Both teams were trying to feel each other out in the first quarter.

In the second quarter, the Colonials were driving down the field with authority and on first and goal, Caleb Lewis fumbled the ball on the five-yard line. Then on their next drive, KYSU drove down the field into RMU territory. Quarterback Jaylen Myers rolled out to his right and found Brett Sylve for the touchdown, but the extra point was missed so the Colonials retained the lead. RMU would keep their one-point lead as the teams headed in for halftime.

In the third quarter, KYSU controlled the tempo by having almost 11 minutes of possession. On their second drive, they took almost 11 minutes off the clock and at the end of the drive, Israel Fields rushed into the endzone for the score. KYSU took the lead 13-7. RMU could not find a way to score in the third.

In the fourth, RMU was charging down the field and they had the ball on the one-yard line. On the next play, they ran the ball with Jordan Johnson and he fumbled the ball. KYSU did not look back, as they ran the remaining 11 minutes and 52 seconds of the clock to win the game by a score of 13-7. With this loss, RMU goes to 0-2 while KYSU goes to 1-0 on the season.

After the game, Terence Stephens, Jr. said, “We were bad and we can’t make these mistakes like we did.” George Martin also offered his thoughts, he stated, “We need to be better, we need to work our butts off this week in practice to prepare for Dayton.”