Francis Marotte to transfer to Clarkson 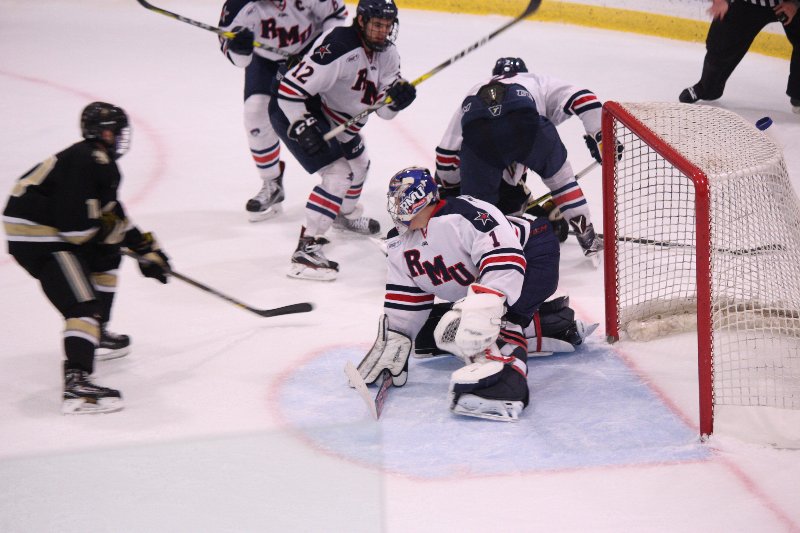 Francis Marotte readies to make save against Mercyhurst

UPDATE: May 20 – 8:30 p.m.
RMU Sentry Media has confirmed the Pittsburgh Hockey Digest report that Justin Kapelmaster has been added by Robert Morris on a graduate transfer. Last year for Ferris State, Kapelmaster started 12 games, finishing with a .903 save percentage and a 3.52 GAA, along with a 1-10-0 record.

MOON TOWNSHIP– The Robert Morris men’s hockey team lost a key member of last years’ team on Monday; as junior goaltender Francis Marotte transferred out of the program. The transfer was first reported by the Watertown Daily Times and later confirmed by RMU Sentry Media.

Marotte, a three-year starter for the Colonials will transfer to Clarkson University to join the reigning ECAC Champions in the Golden Knights. In the transfer, Marotte used his graduate transfer option, meaning he has officially graduated from Robert Morris and is eligible to play for Clarkson in the 2019-20 season.

In 107 games played in the red, white and blue, Marotte holds the career record in multiple categories, including for wins (50), goals-against average (2.55); he is tied for the lead with eight career shutouts and has the fourth-highest save percentage at a .917. Last year, Marotte went 16-21-2 with a career-worst 2.85 GAA, a .908 save percentage and three shutouts.

At Clarkson, Marotte will look to take over the starting role after last year’s starting goaltender, Jake Keilly, was signed to an Entry Level Contract by the Vancouver Canucks on April 1 of this year. Marotte will battle with juniors Chris Janzen and Nicholas Latinovich for the role.

At Robert Morris, it will be a two-horse battle to replace Marotte between the pipes. The lead candidates are sophomore Reid Cooper and junior Dyllan Lubbesmeyer. Over the course of their careers as Colonials, Cooper posts an 0-1-0 record with a 6.29 GAA and a .821 save percentage in four games played while Lubbesmeyer has a .933 save percentage and a 2.31 GAA in seven games played.

RMU has no official statement on the transfer at this time.

Pittsburgh Hockey Digest has reported that the Colonials have added former Ferris State Bulldogs starting goaltender Justin Kapelmaster on a graduate transfer, however RMU Sentry Media has yet to confirm.