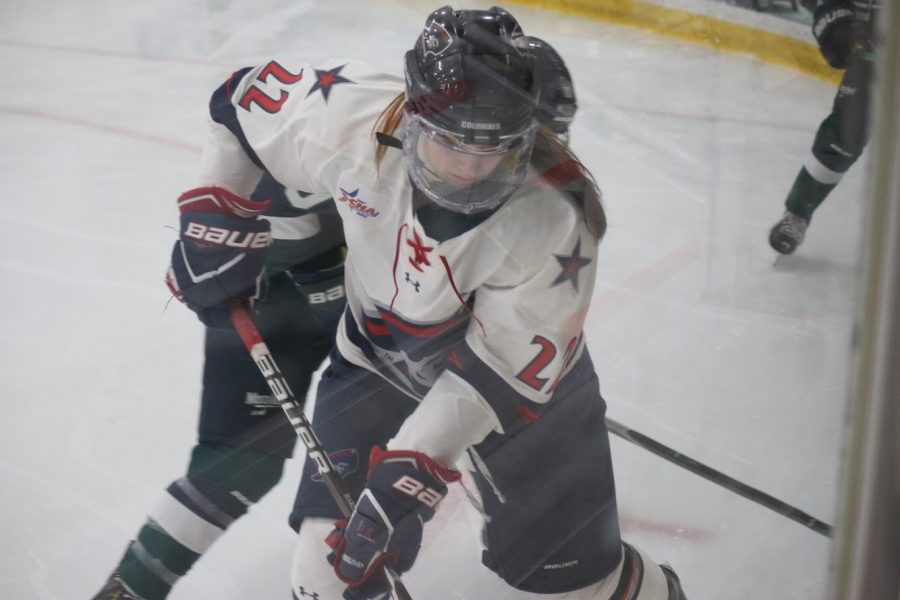 MOON TOWNSHIP — After a tough loss last night to a division rival, the RMU women’s hockey team (13-13-6, 11-4-3 CHA) redeemed themselves with a 4-1 win over Mercyhurst (13-13-5, 10-6-2 CHA). They gained two very important points which keeps them ahead of MHU in the CHA standings as we enter the last week of regular season play.

“Losing sometimes just lights a fire under you and you realize what you could have done better. We knew what the game meant and we were ready to come out here and win,” stated Emilie Harley when asked about friday’s loss as motivation.

Three young RMU underclassmen stood out in this one with sophomore Lexi Templeman having a goal and an assist, freshmen Arielle DeSmet getting the start and the win, and freshmen Emilie Harley scoring a natural hat trick.

With RMU coming out much stronger in the first period on Saturday, they were able to score thanks to Harley finding Templeman who scored midway through the frame at 10:31. Things seemed to be going well for the Colonials as they entered the second period looking to build on their lead but penalty trouble slowed the momentum down for Robert Morris.

In only her second game back from injury, Kirsten Welsh had to watch from the outside looking in again. Welsh was called for a five minute penalty, plus a game misconduct for contact to the head, and Mercyhurst scored on their powerplay. Emma Nuutinen scored at 5:29 into the second, and the game seemed to slip out of the Colonials hand as the Lakers would still be on the power-play.

Robert Morris’s special teams shined in this one, as during this power-play Harley buried home a pass from Sarah Quaranta and the Colonials were back on top with a crucial goal at 6:43. Perhaps RMU’s best penalty killer was Arielle DeSmet who got her first CHA start and win with 24 saves on 25 shots.

“The penalty kill was amazing with lots of blocked shots and it really helped me out, and it was great to come out with the win. I don’t know if the penalties were really fair but we played really well defensively and we had a lot of great kills,” stated DeSmet.

“It was crazy, we had a lot of bad calls I think but we fought through it by getting big and sacrificing your body and doing it for your teammates,” added Harley

The game concluded with another strong period by RMU, this time with less penalties. Harley was able to score her second of the night on a sequence where there was a delayed penalty for Mercyhurst at 10:57. But Harley wasn’t done, as late in the game with the net empty for the Lakers, Lexi Templeman made a great play without a stick to kick it to Harley so she could finish off her first collegiate hat trick at 18:36. RMU ended the game with a 4-1 win, and was ecstatic in the locker room post-game

“Obviously it was a huge team effort and everybody in the locker room just bought in today and we knew what this game meant, we wanted to stay on top and we went out there and gave everything to get it,” said Harley.

“That’s what we’ve been looking for. We are incredibly proud of the way our team responded to yesterday’s game,” said Paul Colontino.

Up next, RMU will travel to Syracuse for a matchup with the Orange (10-13-3 overall, 10-6-2 CHA) this weekend starting Friday at 7:00 and then concluding Saturday at 1:00. This game is another essential playoff game as Syracuse is third in the CHA, and this series will be the last regular season series before the playoffs in Buffalo.