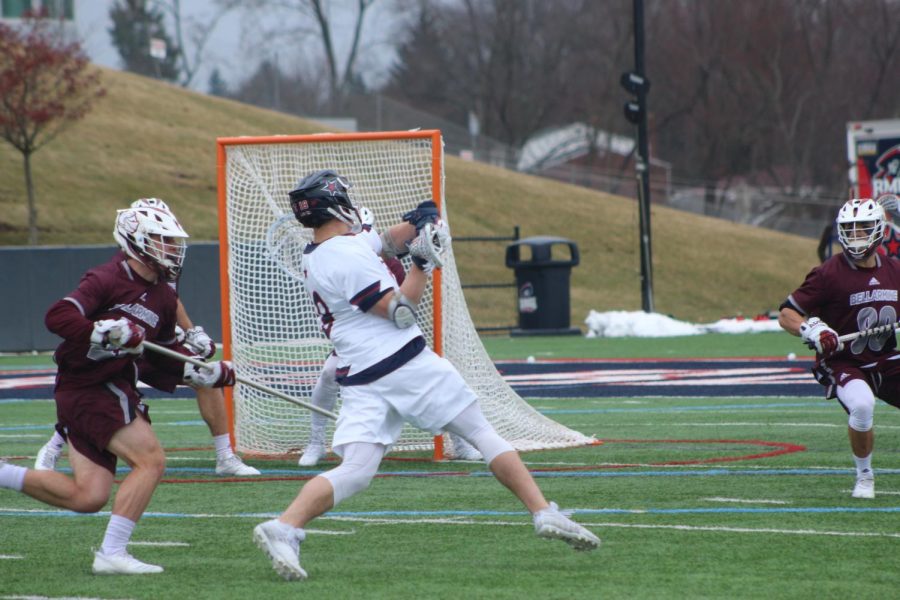 MOON TOWNSHIP — Two goals in the first five minutes of the third quarter took the Robert Morris University men’s lacrosse team (1-2) from trailing by one, to in the lead, a lead that the Colonials did not surrender. Robert Morris stormed back from trailing at the half to go on to beat the Bellarmine Knights (0-4) by a score of 15-7. This offensive outburst was led by Matt Schmidt who netted himself five goals and two assists on the afternoon.

“We just talked about sticking with the plan,” said RMU head coach Andrew McMinn about the team’s discussion during half time in which the Colonials entered trailing 7-6. This deficit came as a result of Knights coming to life in the second quarter.

The second quarter started with the Colonials in front, as Schmidt’s two goals in the first helped RMU secure a 5-2 lead. Robert Morris made this lead to 6-2 at the 12:59 mark in the second after Ryan Smith scored his second goal of the contest.

At this point in the game, the Colonials seemed to be in the driver’s seat, however, the Knights fought back and took the lead before half-time with five unanswered goals. Two of these goals came from junior attackmen, Morgan Macko.

The first came with the Knights up a man as Smith was penalized for an illegal procedure. Macko scored after he received a pass from Landon Trout this put the score at 6-3.

After a goal by the Knights, Stephen Votto made the game 6-4, and Riley Seay scored his third goal of the afternoon to cut the Colonials lead to 6-5. Then while Bellarmine was down a man, Macko scored his second goal to even the game up at 6-6.

Three minutes and change later, the Knights took the lead at 7-6 when Seay scored his fourth goal on the day. This tally was the end of the scoring in the first half as Bellarmine took their 7-6 lead in the locker room at halftime.

The Colonials took the field for the second half down one, but the scoreboard did not stay like this for long as RMU outscored the Knights 9-0 in the half.

It started less than a minute into the second half when Schmidt put his third goal of the game in the back of the Bellarmine goaltender Jordan Dondoyano’s net to tie the game at 7-apiece.

Not even three minutes later, Tyson Gibson slotted home his fifth goal of the season to give RMU the lead once again at 8-7.

Robert Morris did not look back from there, as the Colonials scored another seven goals in the game. These seven tallies were scored by just four different players.

Freshman Brandon Sulhoff scored his first and second career goals in this contest. The first goal came off of a pass Smith, this tally put the score at 9-7. His second goal was unassisted and it was the 15th and final goal for RMU of the afternoon.

Sophomore Jake Bordeau scored his second and third goals of the season after briefly being forced to leave the game earlier due to a hit in the head by a Bellarmine shot. Smith completed the hat-trick on the afternoon during the final stretch when he tucked home a pass from Schmidt.

As for Schmidt, he was just as strong as ever towards the end of the game, as he scored goals four and five on the day. This total was just one shy of his career high of six that was set back in 2017.

“Matt is tremendous for us, he is a natural goal scorer and he came out and stuck with the plan and just kept taking the shots that we expect him to take,” said McMinn about Schmidt’s five-goal performance.

The Colonials will have the chance to get their second tally in the win column next Saturday when they go on the road to take on the High Point Panthers.