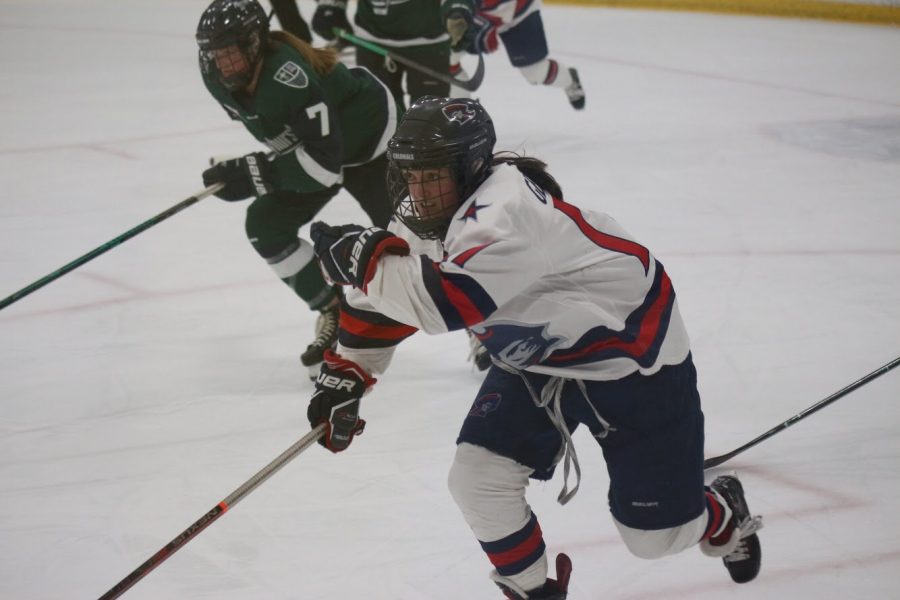 PITTSBURGH — A playoff like atmosphere filled Colonials Arena friday night as RMU women’s hockey (12-13-6, 10-4-3 CHA) faced Mercyhurst (13-12-5, 10-5-2 CHA) in CHA action. Heading into the game, RMU sat three points ahead of Mercyhurst in the standings and were looking to win in essentially what was a four point game. However, after an up and down game, RMU lost by the final score of 5-2 narrowing their first place lead to one conference point. Another storyline of this game, from the defense was the return of tri-captain Kirsten Welsh from her long leg injury. Welsh spent time on the third pairing with Gillian Thompson.

This score of 5-2 could be labeled as misleading though as the Lakers had a couple bounces go their way.The first of these came off of a rebound given up by Lauren Bailey where Alexa Vasko capitalized and score at 4:45 into the first. The first period ended with the only goal being the Vasko tally, as both goaltenders were solid. From early on it was evident that this was a playoff like game as little penalties were called despite the physical play.

“They (Mercyhurst) are always physical, and we try to respond the same way and it’s a lot of fun and I feel that we play better when it is fast paces like that and physical so I thought we responded well with that” stated tri-captain Maggie LaGue.

The second period though was where things got interesting, as it was by far RMU’s best period as they scored two goals. This didn’t happen though until after MHU struck again with a pretty goal by Michele Robillard where she dangled all the way to the back of the net at 1:32. RMU finally responded with a lucky bounce of their own. Firing a long shot from the point on the powerplay, Maggie LaGue scored her first goal of the season and cut the lead to one at 6:03.

“I was nice, it was kind of me just trying to get pucks on net and knowing her (MHU goalie Kennedy Blair) tendencies to go down a bit, I just tried to get it through and it was a good one” LaGue stated postgame.

The defense wasn’t done though, as Emily Curlett fired a top shelf shot to beat Blair and tie the game up at 14:07. The goal was then later changed as Natalie Marcuzzi tipped the puck on the way in. RMU wasn’t able to close out the period strong though, as discipline led to a long 5-on-3 chance for Mercyhurst late in the second. Vilma Tanskanen scored at 18:01 on the 5-on-3 and RMU went to the locker room down one.

Then, early in the third after some tough luck chances for RMU, Mercyhurst was able to get a lucky call. After a netmouth scramble where the whistle was blown early, Mercyhurst’s Sarah Hine scored but the goal was overturned. The referees then went to analyze the call and after a wait, they overturned the overturn, and awarded the goal to Hine at 4:05 into the third.

This crushed the RMU team as they went on to let in another goal at 16:06 by Alexa Vasko again and ended the game with a frustrating 5-2 loss. In a game that meant so much to the standings head coach Paul Colontino had the following to say about the attitude of the team after the game.

“You have to take the appropriate time to reflect on it and let it sink in and then to let it fuel you for the next day. You can’t dwell on it for too long because we are at the end of the season here where every game matters and every point matters.”

Up next the Colonials will play at 3:05 tomorrow on the island for game two of the series where there game plan according to LaGue, is to simply “win.”

“We have to win. We definitely want it and especially at home, we need to have fun and enjoy it and play as hard as we can. I know we can do it so we just got to do it”- Maggie LaGue.

“When you are down to that last 4-6 games in the conference schedule, every game is a playoff game and it’s all playoff hockey no matter who you are playing you are getting everyone’s best”- Paul Colontino.