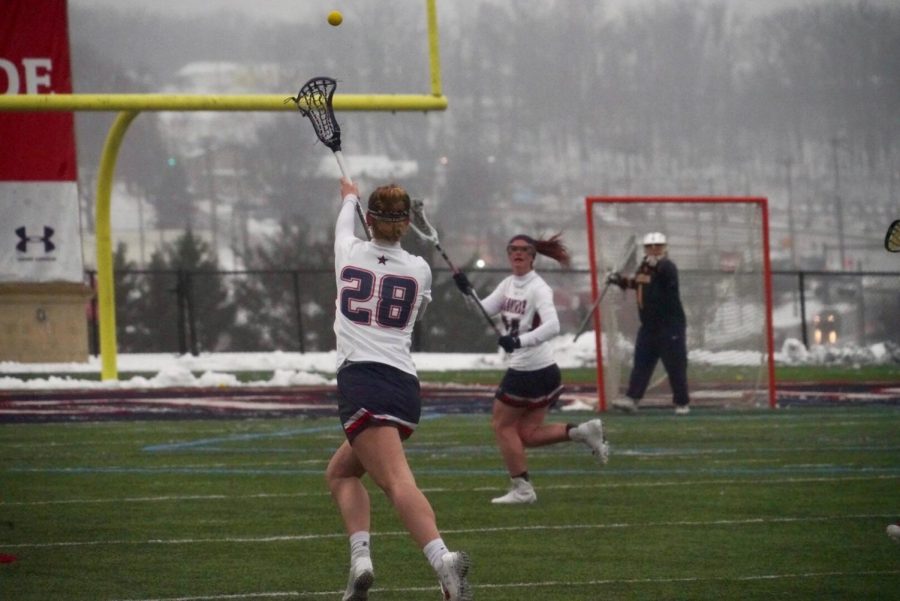 By Tim Kelly and Logan Carney

The first half started off slow. The game was supposed to start at 3:00 pm but didn’t get off until 3:45 p.m. due to bad weather.  The first score was from Shannon Lynch with an assist by Melanie Gandy. This was done in the first period, at 29:22 and made the score 1-0 for Robert Morris.

“You just have to play through whatever they’re throwing at you,” Mackenzie Gandy said to RMU Athletics after the game. “And the weather always has an impact, but we should rise above that. We did what we needed to do to win.”

RMU went on to score seven more times in the first half, with the last goal at 3:14 minutes left. However, a goal scored for Canisius by Jourdan Roemer with the assist by Jen Reininger, at the 1:45 mark put the Golden Griffins down one at the half as the Colonials led 7-6.

The second period was a long and slow start. The first goal was scored by Bryar Cummings from Canisius at the 16:06-minute mark and tied the game up at seven. RMU scored at 14:36-minute mark with the goal by Melanie Gandy and an assist by her twin sister Mackenzie Gandy. The pair had a combined 11 points in the contest.

“Everyone calls it twin telepathy,” Mackenzie said to RMU Athletics after the game. “We’ve just been playing for so long and we know what we’re capable of and what we’re good at. It’s good to always have her there.”

The game went on to reach 10 goals each with CAN scoring to tie it at the 00:03-second mark. Similar to the end of the first half, this goal was also scored by Roemer.

In overtime, a blocked Cummings shot led from Katelyn Milled led to the winning goal by RMU player Sophia Eureka at the 01:16-minute mark. Robert Morris won their first overtime game since 2014, ending a three-game losing streak in overtime according to RMU Athletics.

“The adrenaline was pumping (at the start of overtime),” Eureka said after the game to RMU Athletics, “and we were ready to go in, play at the same level of intensity we had all game, and win it.”

The women’s lacrosse team’s next match-up will be against Liberty University at 3:00 p.m. on Wednesday, February 27. The Colonials currently sit undefeated in non-conference play and won’t start NEC-play till April 5 when the team travels to Wagner (1-2).