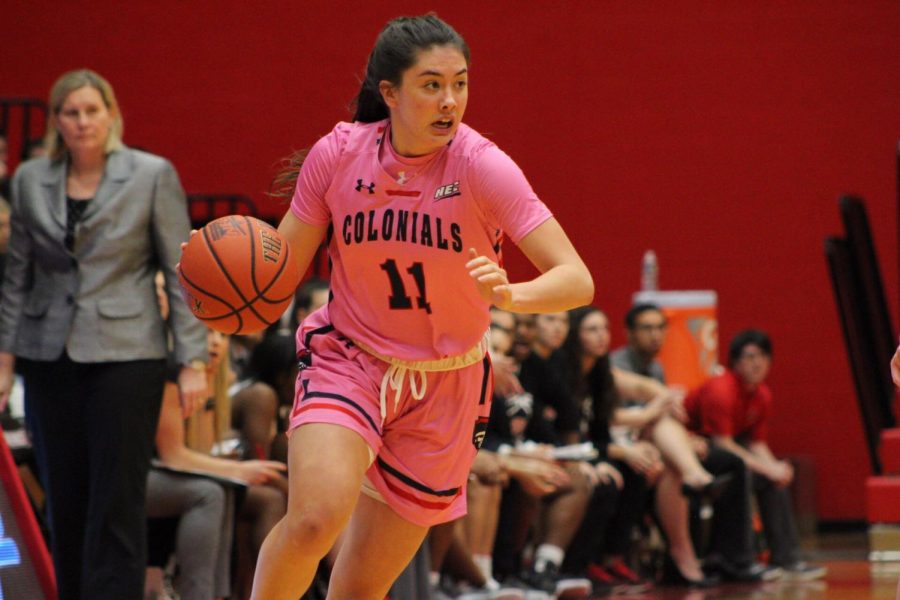 After coming off a bad loss just two nights before, Robert Morris head coach Charlie Buscaglia talked about how he got his team ready for tonight’s game.

“Winning or losing you have to learn how to come back,” explained Coach B, as he’s known. “That’s what I’m trying to teach them every day, not to be high or low. Anger is the worst thing you can have moving forward.”

The two teams came out of the gates turning the ball over. The Colonials and Red Flash combined for five turnovers in the first four minutes of the game which left RMU and SFU at an eight-point tie.

Then St. Francis went on a six-point run. The run was sparked by sophomore, Haley Thomas.

The teams traded baskets down the stretch as the Colonials shot 38.9 percent from the floor while the Red Flash broke even on their attempts from the field.

RMU grabbed their first lead of the first quarter after a layup by freshman, Natalie Villaflor with just a minute and thirty two seconds remaining. Robert Morris would not surrender their lead for the remainder of the first quarter. The Colonials went into the second quarter clinging to a 19-18 lead.

Both teams came out in the second quarter looking to take the game over. The exact opposite happened. The defense of the Colonials’ forced three turnovers in the first five minutes of the second quarter a neither team could run away from the other.

The Red Flash led by as much as six points in the second quarter as Robert Morris was able to close the gap heading into the break.

A last second Villaflor three pointer made the score 33-32 when both teams headed to the locker room. The Colonials offense was led by Nneka Ezeigbo with eight points and three rebounds. Nina Augustin had the most complete first half of any of the Colonials. The Finland native, ended the half with six points and four rebounds. The Red Flash had three players score seven points. Perhaps the biggest problem for RMU was Courtney Zezza. The Plum Borough native, and Saint Francis all-time career blocks leader, only had five points but had momentum changing blocks. The dominant Jess Kovatch was unusually quiet in the first half totaling only three points.

A triple from Nina Augustin took the lead for the Colonials by a score of 35-33. The Red Flash answered with a pair of free throws and a Haley Thomas layup put St. Francis back in the driver seat, 37-35. With the momentum seeming to build in the opposite direction, RMU head coach Charlie Buscaglia took a timeout.

Heading into the fourth and final quarter the Red Flash led RMU, 45-44.

The Colonials lost one of their starters early in the fourth quarter due to foul trouble. After making a three, that gave the Colonials the lead, Isabella Posset was pulled out of the game with over nine minutes to go.

Both teams traded punches like two prize fighters standing toe to toe in the ring.

Nina Augustin lead all scorers with 18 points, all threes pointers. Nneka Ezeigbo ended the night with 16 points and nine rebounds.

Saint Francis’s Jess Kovatch was held to a career low in points with six.

“We had to have a great team effort.” said Coach Buscaglia, “We just made sure who was ever guarding her knew her tendencies.”

Robert Morris will be back in action St. Francis Brooklyn (15-10, 9-4) on Saturday February 23, in the North Athletic Complex.