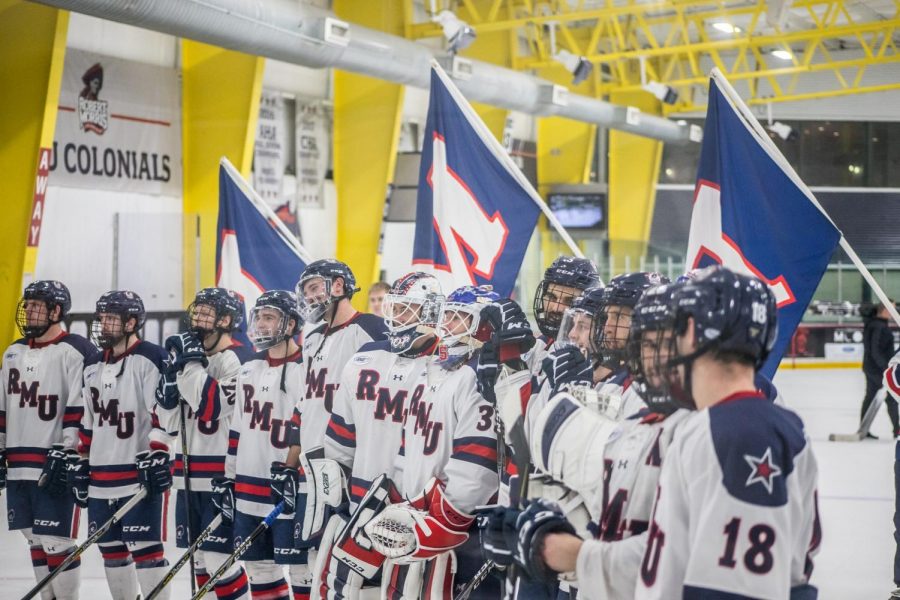 RMU Sentry Media had the opportunity to head to practice to speak with head coach Derek Schooley about the upcoming game.

“We’ve got to be engaged positively, you can’t look in the past; you have to look in the future… looking into the future, we’ve had good success against Sacred Heart in the past, but their a good hockey team that we split against earlier in the year,” said Schooley.

During practice, the team was taking part in a shootout competition, and Coach Schooley added that, “We’ve done a lot of competitive stuff this week, but were loose in the locker room, and we;re positive, and that’s what we need to do.”

The Colonials currently sit tied for sixth in the AHA with 17 points, while Sacred Heart is only one point behind. Luke Lynch, a junior forward from Shaler Township, Pennsylvania, said that, “We have to do a lot of little things; get pucks deep, work on their defenseman, we have a got a lot of skilled guys who like to work the pucks deep.”

Most notably for the Colonials this weekend is Francis Marrotte. The junior netminder has 43 career wins, tied with Terry Shafer for most in program history. Marotte said that he doesn’t really think about the record, and he just, “Tries to approach the games the same way we have been, and try to come out with the sweep.”

Luke Lynch also believes Marrotte has this mentality, saying “Franky is definitely the type of guy who doesn’t think about that, I’m not even know if he knows. But we’re aware of it and trying to do our best in front of him and give ourselves the best chances to win.”

The Colonials play against Sacred Heart this weekend, with the first game on Friday at 7:05 p.m, and the second game on Saturday, with puck drop at 4:05 p.m. Both games will be at Colonials Arena.