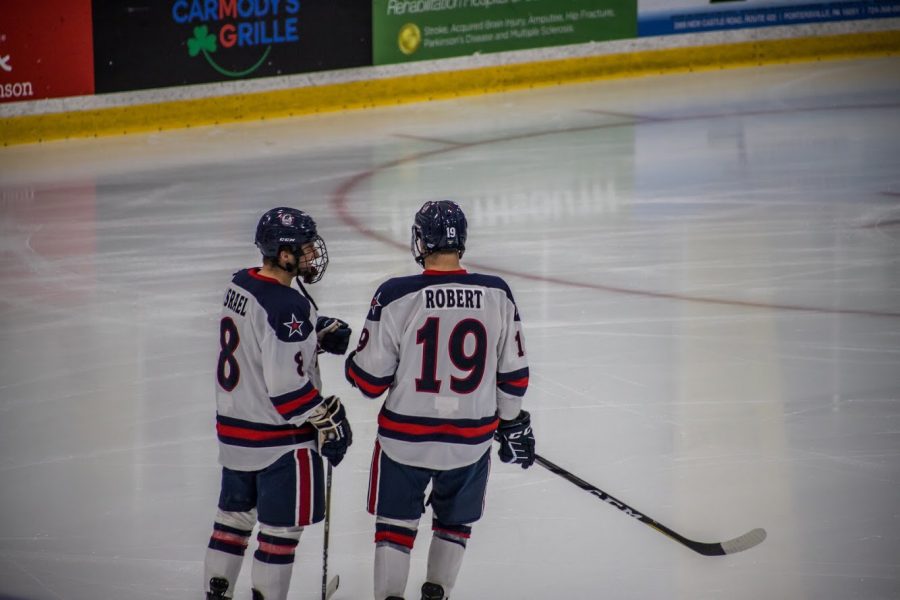 SPRINGFIELD, Ma. — In a game defined by the ability of the Yellow Jackets to respond quickly to any adversity, the Robert Morris Colonials (7-9-1, 6-6-1 AHC) fell to the AIC Yellow Jackets (8-7-1, 8-4-1 AHC) by the score of 4-3 after a late power-play goal effectively put the game away.

This marks just the seventh time this season the Colonials have scored more than two goals in a game. RMU is 5-2-0 in those games with their only other loss coming in their 11-6 defeat at the hands of Penn State (11-5-2, 3-4-1 B1G).

The Colonials were looking to bounce back after their second shutout loss of the season, but keep the momentum going from winning four of their last six games.

It was a relatively quiet first period where American International College out-shot the Colonials, but it was RMU who certainly had the better opportunities with two shots bouncing right off the right pipe of the goal.

After a scoreless first period highlighted by Francis Marotte’s 11 saves, it was Robert Morris who struck first with Luke Lynch getting the puck past Zackarias Skog to get RMU on the board with 18:09 left in the second period.

But just one minute and 17 seconds later it was redshirt freshman Justin Cole who got the first shot past Francis Marotte, and just like that the score sat even at 1-1 with 16:48 left in the second period.

The next seven minutes would be characterized by the Yellow Jackets taking control of the period, as they limited the Colonials to just one shot on goal. That consistency of quality play paid off for AIC when a missed shot from Christensen bounced off the back of the boards just in front of Marotte where junior center Joel Kocur was able to sneak it past the goaltender to give the Yellow Jackets their first lead of the game.

The dismal finish to the Colonials second period was highlighted by a pair of penalties from junior Michael Coyne who earned himself a two-minute minor for cross checking and a 10-minute misconduct to go along with that.

“I thought in the second period they out-competed us,” said Schooley “We didn’t do a very good job managing pucks. We talked about two things: our compete level’s and we got to manage pucks.”

The Colonials would get a second chance though. Nicolas Luka would go to the penalty box for the Yellow Jackets for interference and RMU would get another two minutes to even it up on special teams.

But much like their first attempt, the shots and the smoothness of play was simply not there for the Colonials.

But Daniel Mantenuto and Grant Hebert quickly made many forget about that as a perfect pass from Mantenuto allowed for the quick finish from Hebert and the Colonials would tie it up at 2-2 at the very end of their second power play.

It seemed as though the story of the night would be the Yellow Jackets quick response to an RMU score as just two minutes and 21 seconds after the Colonials score, it was Tobias Fladeby who gave AIC their lead back as he skated into the middle of the ice and buried the shot past Marotte.

To make matters worse, just minutes later the Yellow Jackets would go on the power play.

Even with things seemingly going against the Colonials, it would be Jacob Coleman who would make the most impactful play of the night for Robert Morris as he would steal the puck and send home the short handed goal just past the right shoulder of Skog as RMU would tie up the game in dramatic fashion.

“I was just up-high, I was pushing. I think I baited the defenseman to think my stick was one way and then once I saw him go to make the pass I got a good jump on it. And going down, I looked up and just tried catching the goalie off-guard and I got one.” said junior Jacob Coleman.

But as soon as the Colonials appeared to be back into the game, misfortune struck once again. A penalty against Nick Prkusic led to another AIC power-play and it only took a matter of seconds for junior center Hugo Reinhardt to put the Yellow Jackets back in the lead.

“We got to get people to step up,” said Schooley, “And guys that haven’t produced as much offense, obviously a goal from Luke Lynch and Grant Hebert, and then Jake Coleman with a big-time shorthanded goal. But we needed a kill at the end of the game and we did not get it. At the end of the day, close isn’t good enough.”

The Colonials made a final push when they emptied their net with 1:48 left in the game. Robert Morris did an excellent job controlling the puck, but a controversial offsides call derailed any chance of an RMU comeback with 17.0 seconds remaining.

When trailing in the third period, the Colonials are now 1-9-1 on the season with their only comeback victory coming Dec. 1 against Sacred Heart off Michael Louria’s game-winning OT goal.