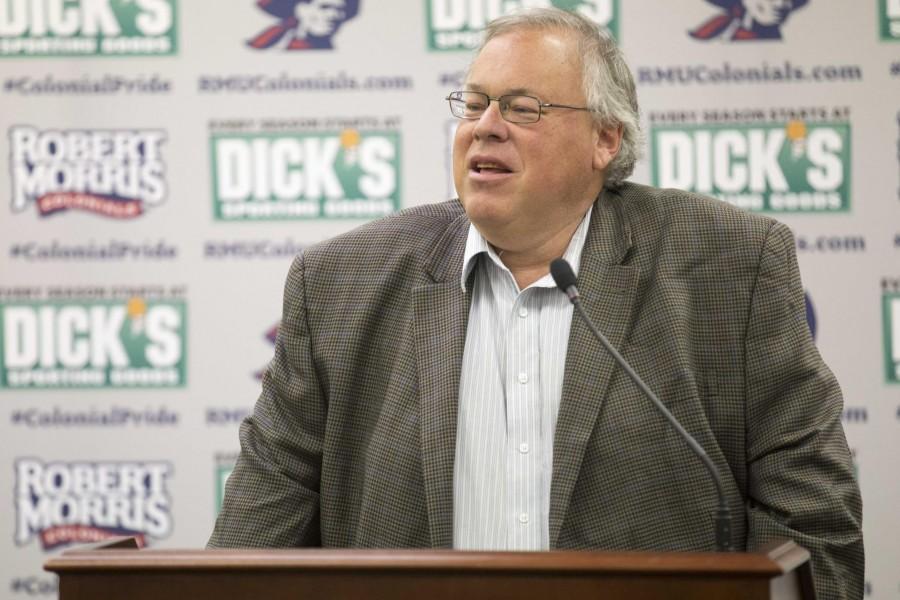 MOON TOWNSHIP — There is a reason that the opening line of Craig Coleman’s bio on the Robert Morris Athletics website begins with “At the forefront of RMU’s golden age of intercollegiate athletics is Craig Coleman, M.D.” That reason is the mountain of achievements that Dr. Coleman has achieved since he took the helm of the RMU athletic department in Feb. of 2005. Leaving in midst of his 14th academic year as the athletic director, Coleman is leaving behind a legacy of success at the regional and national level, both on and off the field.

That legacy includes winning, and a lot of it. In 13 seasons under Coleman, RMU captured a whopping 24 regular season titles. In that same timespan, the Colonials were able to earn 16 automatic berths to the NCAA tournament.

Earlier this year when the men’s lacrosse team secured their first Northeast Conference championship and a spot in the NCAA tournament marked the 12th time in Coleman’s 13 years that at least one team was sent to the NCAA tournament.

In 2010, the football team won its’ first and only NEC championship under Coleman. They also won the NEC’s inaugural bid to the Football Championship Subdivision playoffs, which marked another unique achievement for the school.

Also in 2010, despite being in just its’ sixth year as a program, the men’s lacrosse team earned its first-ever national ranking. This ranking came from the United States Intercollegiate Lacrosse Association (USILA).

In the years following this, there was even more athletic achievement. In 2012, the women’s hockey team won their first ever College Hockey America (CHA) tournament. Their 3-2 victory in the championship game snapped Mercyhurst’s’ streak of nine consecutive titles.

A year later in 2013, the men’s basketball team and softball team – Dr. Craig Coleman was also the coach of the softball team – both won NEC championships. In addition to this, the biggest win in the history of RMU athletics came when RMU took on college basketball juggernaut, the University of Kentucky Wildcats in the first round of the 2013 National Invitation Tournament (NIT). The Colonials shocked the basketball world and were thrust into the spotlight when a school-record crowd of 3,444 packed the Charles L. Sewall Center and watched RMU beat Kentucky 59-57.

In 2013-2014, the men’s hockey team and the women’s basketball team both played in the NCAA tournament. This marked the first time in the school’s history that a pair of teams secured an automatic NCAA tournament birth.

However, with all of the great on the field achievements attained under Coleman’s reign, the case can easily be made that the athletic program has been better in the classroom. Academic achievement has been a staple of RMU athletics throughout the entirety of Coleman’s tenure.

In Coleman’s first year in charge of athletics, nine athletes from six different sports were named to the ESPN The Magazine District II Academic All-America Team. This number still stands as the school record.

More recently, there have been many more academic accolades that have been achieved by Coleman’s programs. In 2017-2018 there was a myriad of these achievements. Across RMU’s 16 sports programs, the student-athletes combined to post a grade point average (GPA) of 3.440. Fourteen out of RMU’s 16 programs were able to finish with a very respectable GPA of 3.2 or higher.

2017-2018 also saw many individuals achieve academic greatness within the Colonials athletic program. For instance, 12 hockey players, six from both the men’s and women’s teams, finished the year with perfect 4.00 GPAs. On top of this, three RMU student-athletes were named the NEC Scholar-Athlete of the Year in their respective sports.

Finally, former women’s lacrosse player Dana Davis was named the 2018 NEC Student-Athlete of the Year. This award goes to a male and female senior across all NEC sports and it takes into account athletic achievement, academic success and involvement in community service.

Another staple of the Coleman era of RMU athletics has been the quality of coaches. In his span at the helm of athletics, Coleman has hired a total of 10 head coaches. The most recent of these hires was the head coach of the football team Bernard Clark Jr. who was brought on board in December of 2017.

Another head coaching staple of the Coleman era has been men’s hockey head coach Derek Schooley. While Schooley was hired in August of 2003 as the first coach of RMU hockey before Coleman took over as the director of athletics for Robert Morris, the program was still in its infancy when he was hired in 2005. Under the helm of coach Schooley and athletic director Coleman, the men’s hockey team has been essentially built from the ground up. The crowning achievement of the program came in 2013-2014 when the team won its first ever American Hockey Conference Championship and, in doing so, secured their first ever birth to the NCAA tournament.

However, with all of the achievements on and off the field, the crown jewel of Coleman’s reign as athletic director is not fully here yet. The construction of the UPMC Events Center began during Coleman’s tenure, and while it will not be finished before Coleman leaves the university, the 161,000-square-foot venue is representative of not just the regional, but also the national achievement attained by Dr. Coleman’s long tenure as athletic director.