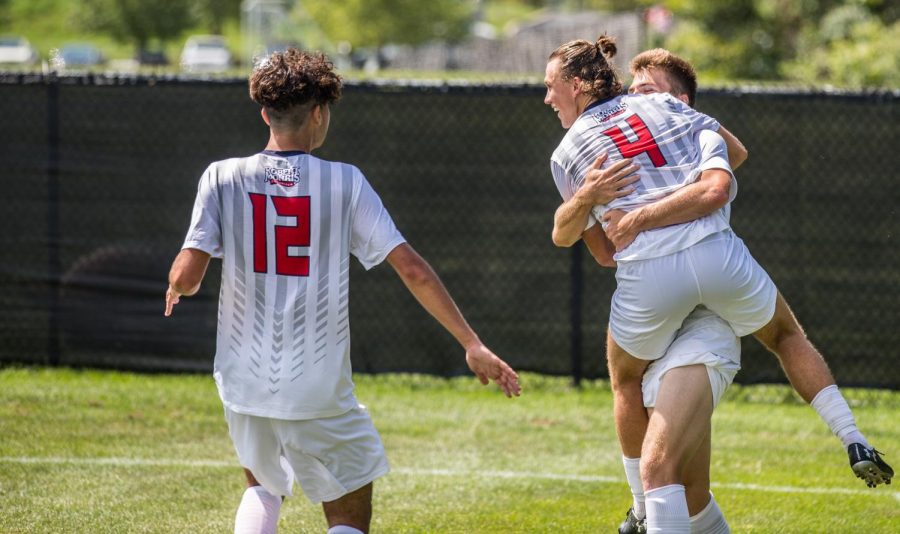 MOON TOWNSHIP, Pa.- The Robert Morris Colonials men’s soccer team (4-9-1, 2-3-0 NEC) played host to the Northeast Conference leading LIU Brooklyn Blackbirds (10-3-1, 5-0-0) on Friday. On a crisp fall day at the North Athletic Complex, the Colonials would drop the contest 1-0 to the No. 89 ranked team in the NCAA.

The game would start out physical for both teams, as within the first 10 minutes, there were five fouls, two by Robert Morris, and three by LIU Brooklyn. RMU would get a chance to score in the 8th-minute as Brazilian junior Guilherme Fanck would shoot a rocket just above the crossbar.

The Blackbirds would get on the board in the 11th-minute, as Mauris Koss would take a ball deflected by Robert Morris and put it in the back of the net to make it 1-0. In the 15th-minute, LIU would get a great chance again, but Colonials netminder Winter Fondi would make two great saves in a row before the ball was cleared by Robert Morris.

With LIU Brooklyn putting heavy pressure on the Colonials, Winter Fondi would be again called upon to make an amazing save in the 25th-minute, diving to take a goal away from Romario Guscott.

With 11 minutes remaining in the half, the Colonials would get one of their best opportunities of the half, as Christian Coridon would let a screamer go that would have found the upper 90 if it wasn’t for Blackbirds goalie Sam Ilin, who had to punch the ball over the net to keep it 1-0 Blackbirds.

After 45 minutes, the Colonials were behind the Blackbirds by a score of 1-0 after the goal by Koss. LIU-Brooklyn outshot Robert Morris 8-4 and had nine fouls compared to Bobby Mo’s 11. Colonials midfielder Owen Pearce was the only one to get a shot on the net in the half for the team.

At the start of the second half, it was more of the same for the Blackbirds; as through the first five minutes, the ball was almost exclusively in the Colonials half of the pitch. In the 50th minute, the Colonials’ Riccardo Rota was given a yellow card.

In the 52 minute mark, Cristian Palermo would get an excellent chance for his first collegiate goal, but his chip shot went just past the right post. Kai Olguin would follow that up two minutes later with a shot that went over the crossbar.

After the first 10 minutes of the second half, the Colonials seemed to have put on the pressure. Oeyvind Skjesol, a sophomore defender from Norway said that “We weren’t there at all in the first half… but Bill (Denniston) told us to go out in the second half and give them a fight.” Skjesol also added that he thought the team did well enough in the second half to deserve a draw.

With 32 minutes remaining in the game, a corner kick by Lorenzo Guagneli would find the head of Rota, but his attempt on goal would end up bouncing wide left.

LIU Brooklyn would get an attempt at putting the game away, but Ahmad Elfaham’s shot would curl past the left post and go out. Winter Fondi would be called on again for the Colonials as he rushed out to the 18-yard box and stopped an attempt by Zach Peterson.

Skjesol attempted to get the equalizer in the 81st-minute, but Sam Ilin was there in goal for the Blackbirds to keep their lead secure.

At the final whistle, the score was 1-0 in favor of the Blackbirds, who would stay undefeated in the NEC. LIU Brooklyn outshot the Colonials 13-12 in the game, but in the second half, Robert Morris had three more shots than the Blackbirds.

Winter Fondi made five saves in net for the Colonials, and Zac Sherman added three shots while playing the full 90 minutes.

Head coach Bill Denniston said, “We played well enough in the second half today to win, so I just hope they keep their heads up for Sunday.” The Sunday game in question is a 1:00 p.m. kickoff against the Central Connecticut State University Blue Devils (0-11-1, 0-5-0 NEC) at the North Athletic Complex.