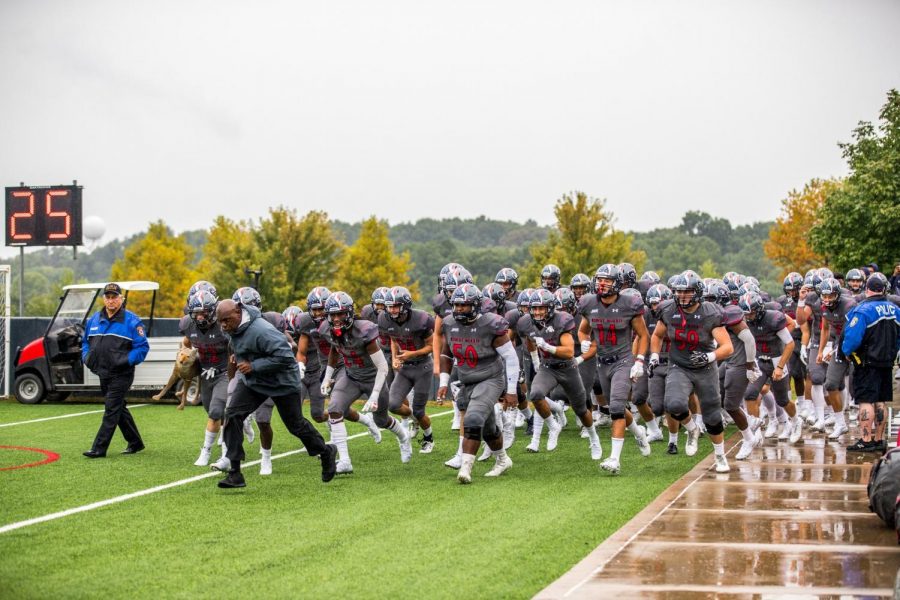 The Robert Morris University Colonials (1-1) picked up their first win of the 2018 campaign with a 22-19 victory over the Virginia State Trojans (0-2). This victory was sealed when the Colonials’ Frank Antuono blocked a game-tying field goal as time expired. The contest was close from beginning to end, here is a breakdown of yesterday’s action.
Turnover woes:
Yes, it was raining the whole game making conditions less than favorable for offensive football, however, the Colonials turned the ball over a total of six times but were only able to generate one turnover. The lone VSU turnover came off of a pass that deflected off the receivers hands and was hauled in by a diving Tyler Lamica.

As for the RMU turnovers, two of them came off of muffed punts, 3 of them were interceptions and last but certainly not least was a botched handoff in which the Trojans recovered in the Colonials end zone for a touchdown making the game 19-7 at that point. These mistakes could have easily cost the Colonials this contest.
The RMU defense:
For the second week in a row, the RMU defense could be described as porous. The defense has allowed at least 400 yards of total offense in both of their games this season. This is especially concerning considering the fact that last week VSU was only able to muster up 267 yards of total offense against Norfolk State (1-1). In addition to this, Norfolk State gave up just 13 points to the Trojans opposed to the 19 the Colonials allowed. While it is fair to say that six points aren’t that much of a difference, VSU squandered multiple offensive opportunities. They also struggled on special teams as they missed two field goals and had another blocked.

The RMU offense:
After a promising performance last week against the Flyers where the offense put up 416 total yards there was plenty of reason for optimism coming into this week against a Division II opponent in VSU. However, the offense was not too impressive against the Trojans on Saturday. The rushing offense was not very good. RMU only ran for 78 yards on 28 carries. That breaks down to a lackluster 2.8 yards per carrying. As for the passing game, they were able to put up 225 yards and two touchdowns. With that being said, 129 of these yards came in a 1:18 stretch in which the Colonials came back from being down 19-7 to leading 22-19. Other than this stretch of the game, the offense was difficult to watch at times.
The positives:
The 1:18 stretch of time in the fourth quarter were the Colonials came back from the brink of death to winning the game was by far the brightest moment for the team. Matthew Gonzalez caught an 81-yard touchdown from Jimmy Walker to bring the team within seven at 19-14. RMU then recovered a successful on-side kick. With the ball in their hands once again, the Colonials marched back down the field and scored what would go on to be the game-winning touchdown.