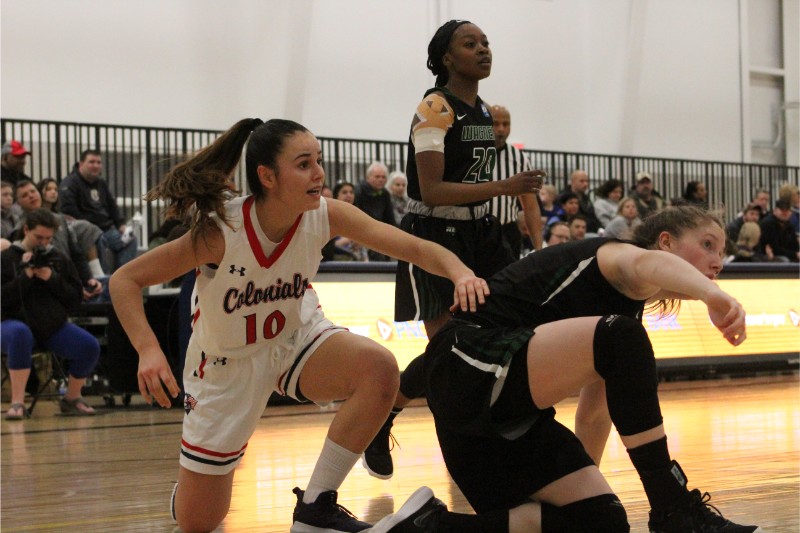 At a time of year when every win or loss has incredulous postseason implications, the Robert Morris Colonials edged out the Wagner Seahawks 49-46 to remain in contention for the conference title.

The shots were not falling for much of the first half for the Colonials as the entire team closed out the half shooting a miserable 7-for-32 from the field compared to their opponent finishing the first half of play shooting 7-for-15. Despite getting off 17 fewer shots the Seahawks put in just as many baskets.

While it wasn’t a major problem for an RMU team built on their impressively stout defensive play, even with 16 forced turnovers in the first half the Colonials still trailed 20-16.

“We did do a good job of passing the ball well, we didn’t do a good job of knocking down shots when we had them,” said head coach Charlie Buscaglia. :But that’s fixable. and even when you have a bad quarter like that we were continuing to go in there and be gritty and go get it on the defensive end”

Megan Smith was continuing to prove why she is one of the toughest forwards in college basketball, getting thrown to the floor on multiple occasions to draw the charge, fearless in the paint as the physical intensity of the game picked up.

While the defense remained consistent, Coach Buscaglia and the rest of his Colonials squad looked exasperated and frustrated as even open looks weren’t falling. The absence of Honoka Ikematsu, one of the best shooters in the entire NEC, with an upper-body injury was certainly making an impact on RMU’s shooting.

In the second half, RMU decided to flip the script on the Seahawks.

In the Colonials’ most consistent sequence of play in the game, Megan Callahan made her presence felt when she hit back-to-back three-pointers to put RMU back in the lead 22-20.

It felt as though in the first 52 seconds of the second half, all the energy had been drained from the Seahawk sideline.

And with and emphatic bucket and-one from Mikalah Mulrain the Colonials bench roared, their intensity higher than ever as Robert Morris had climbed back into the ball game.

“Coach just really talked about playing free at halftime. In the first half, we were bottling ourselves up and not playing free and that’s what we like to do.” said freshman guard Megan Callahan.

Wagner’s physical intensity picked up with every thwarted opportunity and the fouls were beginning to pile up for the Seahawks.

With a little less than five minutes left in the third quarter, there were four Wagner players who were already up to three fouls apiece.

In her first career start, Finland native Nina Augustin shined as she finished second on the team in scoring with 11 points.

Despite the fact that these two teams have had completely opposite seasons, the struggling Wagner Seahawks battled toe-to-toe with RMU. With under 2 minutes to play, Wagner held a 45-44 lead and the Colonials were not only facing their third loss in conference play but potentially losing out on home-court advantage in the NEC Tournament.

Coach Buscaglia used excellent time management skills to call a timeout and regroup. The play he called sent the ball on the inside to Nneka Ezeigbo who made a great move in the post to give the Colonials a 46-45 lead.

Holding a three-point lead with 19 seconds left in the game, the RMU defense held tight as Nakylia Carter missed the game-tying shot with four seconds remaining as the Colonials would escape with the win.