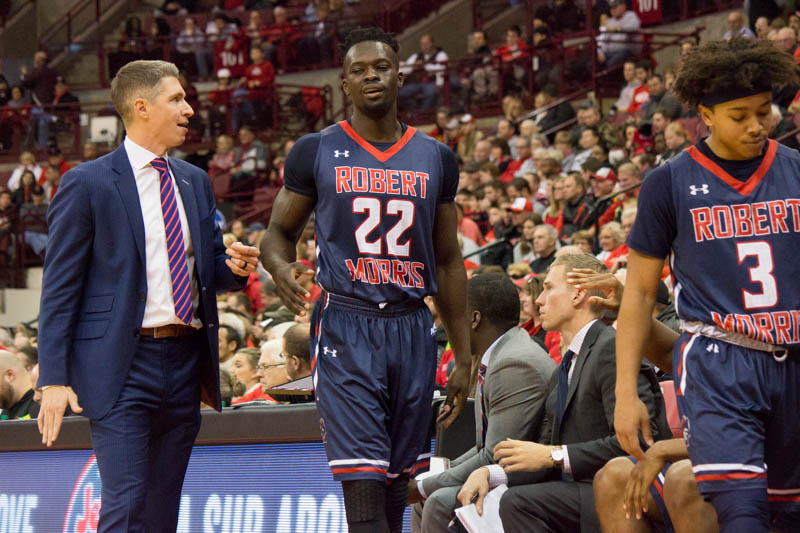 Number seven-seeded Robert Morris Colonials battled the number two-seeded Mount St. Mary’s Mountaineers for the second time in a week in Emmitsburg, Maryland, in the NEC Quarterfinals Wednesday evening as the Northeast Conference Tournament tipped off.

The Colonials have lost their previous seven games against Mount St. Mary’s, including two double-digit losses on Feb 1. at PPG Paints Arena (67-42) on Feb. 22 in Emmitsburg (72-53).

However, RMU put a stop to The Mount’s dominance over the Colonials the past few seasons as RMU upset Mount St. Mary’s 60 to 56 on The Mount’s home court Wednesday night.

Both teams exchanged multiple lead changes within the first 10 minutes as RMU saw three three-point shots go through the hoop as the NEC Rookie of the Year Koby Thomas and fellow freshmen Jon Williams and Chris Coalmon hit shots from beyond the three-point arc to stay with the Mountaineers early on as they took a 10-5 advantage.

The type of start to the game was crucial for the Colonials against as RMU have fell behind by double-digit points early on in the previous two meetings between the teams.

The Mountaineers held a two-point lead with a little over eight minutes to play in the opening half until junior Matty McConnell scored his first points of the game via a nifty layup past a Mountaineers defender.

Jon Williams hit his second three-pointer of the game moments later, giving the Colonials a three-point lead at 22-19. However, the Mount would then take a 28-22 lead after back-to-back three pointers from Greg Alexander and one from Bobby Planutis.

Mount St. Mary’s pushed their lead to double digits at 33-22 on a Jonah Antonio bucket from beyond the three-point arc and then Chris Wray extended The Mount’s lead on a prayer shot in which he was fouled. Mount St. Mary’s seemed to have taken control of the game at this point after multiple lead changes and ties started the game.

Jon Williams hit another three-point shot at the buzzer for RMU but the Colonials still faced a double-digit deficit heading into the locker room for halftime.

The Colonials kept their foot on the gas pedal throughout the second half, consistently holding a a lead through the second half after battling back at the start of the second frame.

Mount St. Mary’s cut RMU’s lead to 58-56 with a three-pointer from Alexander but Junior Robinson missed a jump shot with seconds left as RMU grabbed the rebound and ran out the remainder of the clock as Dachon Burke connected on a dunk as time expired.

Robert Morris held Mount St. Mary’s best shooter Junior Robinson to 15 points and 6 of 18 shooting from the field and one of three from downtown.

McConnell led all scorers with 18 points finishing 4 of 7 from the field and 3 of 5 from beyond the three-point arc.

Overall, the Colonials shot 47.8 percent from the field hitting 22 of 46 shots as well as shooting 43.5 percent from three-point land hitting 10 of 23 shots from downtown.

The Colonials will square off with the Wagner Seahawks in the semifinals of the Northeast Conference Tournament on Saturday, Feb. 3 at 2 p.m. in Staten Island, New York.