Colonials draw with Air Force on senior night; will face Bentley in AHC first round 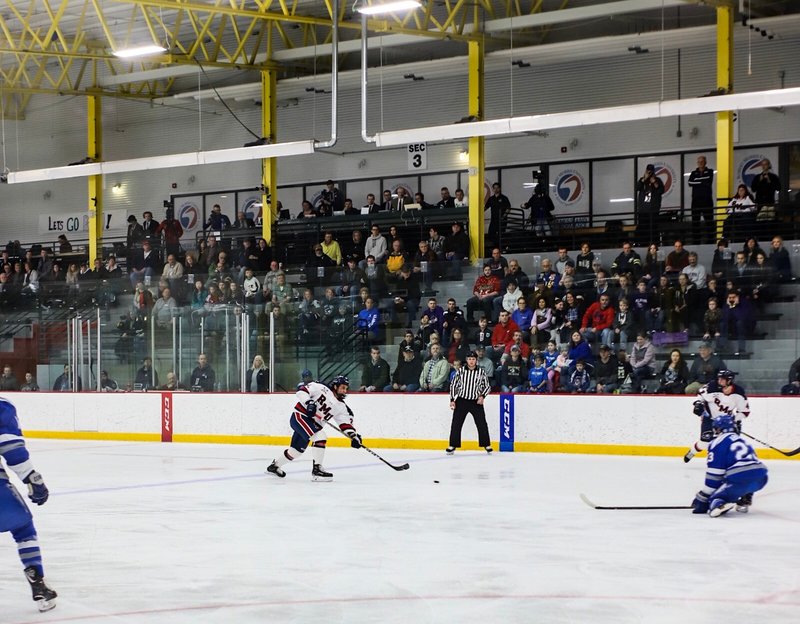 Robert Morris (12-13-3 AHC, 13-18-3 overall) completed their final weekend series of the regular season Saturday night against the Air Force Falcons (13-11-4 AHC, 18-13-5 overall). The Colonials were looking to end their five-game losing streak heading into Saturday’s game as well as looking to secure a first round bye in the AHC Tournament. However, the game ended in a 2-2 stalemate, eliminating RMU from securing a first round bye in the upcoming AHC Tournament.

The Colonials started out with the momentum early on in the first period, also stepping up with their physical play, which the Falcons had controlled for seemingly the entirety of the first game.

The game remained scoreless until just over four minutes left in the period, when Alex Tonge cashed in on a rebound off a Brady Ferguson shot to put the Colonials up 1-0. RMU would carry the lead into the second period, but the physicality would eventually shift the Falcons’ way. Air Force would dominate most of the second frame, and got on the board when Phil Boje’s shot from the point got past Francis Marotte at the 9:08 mark of the second period.

Just over four minutes later, RMU found itself again down by one, as they have so many times in this second half of the season, when Marshall Bowery potted a slick backhand feed from Brady Tomlak to put the Falcons in front 2-1. Air Force controlled most of the defensive play in the 3rd, limiting the Colonials’ chances at the net and it seemed as if RMU’s losing streak would continue.

But once again, the Hobey Baker nominee would spark the change. Ferguson got his stick on Timmy Moore’s wrister from the point at the 17:05 mark, and, despite a high stick review by officials, Robert Morris was back into the contest tied at 2.

A physical overtime soon followed, climaxing in the final seconds, when the Colonials twice shot for an empty net after Air Force pulled their goalie for an extra attacker, their second attempt missing the net by mere inches.

One facet of the Colonials offense that has seemed to run dry, however, is their power play, something Ferguson said they need to fix in order to come out winners next weekend.

“I think (we need to) just keep it simple, make the smart play..eventually we’ll get that dunkaroo goal,” Ferguson said. Ferguson also stated that the team cannot take playoff opponent Bentley lightly. “Bentley’s a really good team. I think we need to build off of this weekend, play smart, and conserve our game…eventually I think the goals will come.”

With the draw, RMU dropped to the #7 seed in the AHC standings and will host the #10 seeded Falcons of Bentley next weekend in a three game series. Games one and two are this Friday and Saturday with a 7:05 pm. puck drop at Colonials Arena.