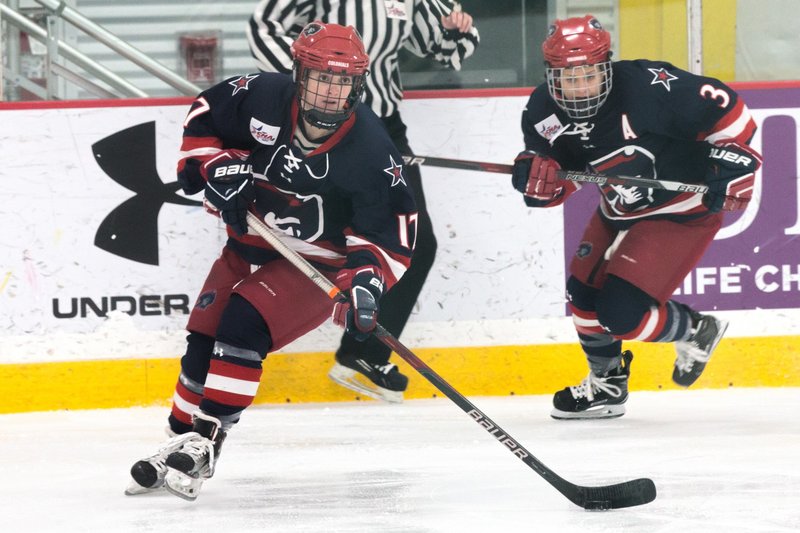 The first period was mainly a game of cat and mouse until roughly 40 seconds left in the period when Brittany Howard scored the first goal on a power play, putting RMU up 1-0.

This goal makes her the all-time leading scorer for RMU women’s hockey with 74 points, breaking the previous record set by Rebecca Vint.

When she learned about the accomplishment, she couldn’t stop smiling.

“I can’t get the smile off my face, it’s a great feeling obviously to get the W going into Mercyhurst next weekend, it’s going to be a wondrous two battles, so it’s going to be totally exciting for sure,” said Howard.

Breaking the goal-scoring record in her final home game as a Colonial, Howard reflected on her time here at RMU and the atmosphere of senior day.

“It was amazing, with the band too, even with speeches from the coach at the beginning of the game, it’s been a great five years here at Robert Morris.”

The first period ended with a score of 1-0 Robert Morris.

The second period was filled with three goals and lots of offensive power from the Colonials. The first two goals that were scored in the second period were put up within a matter of seconds of each other, and the third was scored just minutes later.

The first goal was scored by Emily Curlett at 4:03 with an assist by Maggie Lague and Leah Carey. The goal was Curlett’s eighth of the season.

The second goal was scored and confirmed after a review by Amanda Pantaleo with an assist by Jessica Gazzola and Leah Carey. That goal was Pantaleo’s fourth of the season.

The last goal in the second period was scored 9:08 by Anjelica Diffendal with an assist by Howard and Kirsten Welsh. The goal was Diffendal’s third of the season.

With Howard and a bunch of seniors on their way out of Robert Morris University in the coming months, Colontino explained how he was planning on making up the production levels.

“Well we feel like we have some really good depth in our current roster, and then as always the recruiting process for us and bringing in more great people, talent and student-athletes,” said Colontino. “You lose players, like say, Brittany Howard, who has a lot of points, and you just need more people in the lineup.”

The third period involved the Colonials putting offensive pressure on the Lions until the end of the period when Jaycee Gebhard scored the fifth and final goal of the game 18:38 into the period.

The Colonials capped off the game with a 5-0 shutout and weekend sweep of the Lindenwood University Lions on an accomplished night for Brittany Howard and the pending graduating seniors of the Robert Morris University team.

The Robert Morris Colonials head back on the road to face Mercyhurst University on Friday, Feb. 16 and Saturday, Feb. 17.