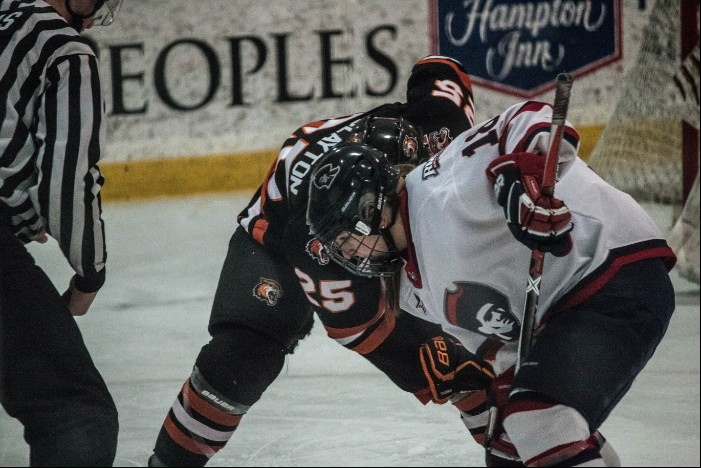 With a decisive victory over their conference rivals in RIT, the No. 8 ranked Colonials moved to 19-3-6 on the regular season and 12-2-2 in conference play.

RMU started off the game strong, opening the scoring with an even strength goal from junior forward Jessica Gazzola. She was assisted by junior defenseman Katherine Murphy and senior defenseman Maeve Garvey.

In the lead, the Colonials continued to press the visiting Tigers. Junior defenseman Natalie Fraser and redshirt junior forward Brittany Howard both scored within the next ten minutes of the first period, extending RMU’s lead to 3-0.

Senior defenseman Mikaela Lowater found the back of the net at 2:07 of the second period. Her goal came during 5-on-5 play, with each team having a player in the penalty box.

Freshman forward Jaycee Gebhard rounded out the Colonials’ scoring with an even strength goal at 18:25 of the third period. She was assisted by senior captain Rikki Meilleur and Howard, who continues to build to her impressive, record-breaking assist total this season.

The Colonials were anchored by senior goaltender Jessica Dodds, who stopped 24 shots in the contest.

With two consecutive, decisive victories, the Colonials are starting to find their “Colonial Hockey” again. After many weeks of winning Friday night and losing/tying Saturday afternoon, RMU has broke the spell and swept a series.

The Colonials need to keep this trend alive as they head into the last two weeks of the regular season. With only eight points left to earn, each victory is critical if Robert Morris wishes to remain No. 1 in the CHA and move on to the NCAA tournament.

RMU faces off next on Friday, Feb. 17 at 7:05 pm at 84 Lumber Arena against the visiting Penn State Nittany Lions. This game begins the last inter-conference series of the regular season for the Colonials.

Robert Morris will end the regular season on the road against Lindenwood on Feb. 24-25.