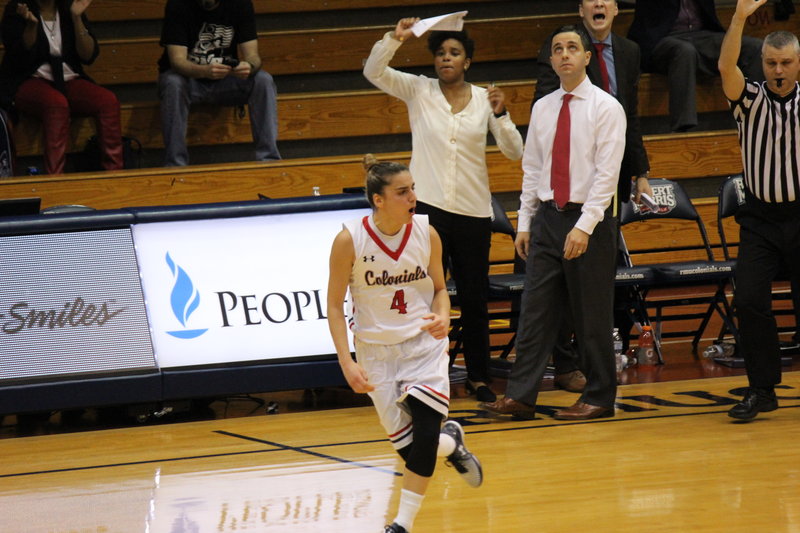 Anna Niki Stamolamprou's 15 point performance helped the Colonials earn their 11th win of season as they took down The Mount.

The Colonials walked into the Sewall Center on Monday night missing something important, a signature victory in the NEC. A big time victory in a big time moment that would make a statement to the rest of the conference that the Colonials had arrived.

And perhaps their best chance of the season came in this home game versus the Central Connecticut State Blue Devils, who came into their first game of the season against RMU with a 6-1 conference record and a spot tied for first place with two other NEC teams. The team which sat behind all three in first was the Colonials.

A win in this one would put the Colonials within a game of third place in the conference, a far more favorable spot for the Colonials, who until a week and a half ago had sat closer to the middle of the conference and facing the potential of starting their conference tournament on the road.

But for head coach Charlie Buscaglia, the only thing that mattered at this moment was the game at hand.

The game started off cold for the Colonials from the floor, who only shot 7-for-21 in the first half, reminiscent of their first half performance against the Bryant Bulldogs on Saturday. But if Robert Morris was going to pull this one out against a far tougher Blue Devils squad, they were going to need to get some scoring.

The game remained tied at 34 going into the fourth quarter. Not great numbers for a team that leads the league in points per game.

“We could never get into a flow,” said Buscaglia when talking about his team’s first three-quarters “I give them credit for obviously doing some of the things they did defensively that made us a little uncomfortable. But we gotta respond a little bit better offensively than we did.”

But in this game it wasn’t how you started but how you finished.

Anna-Niki Stamolamprou was completely and utterly shut down for the first three-quarters. The senior guard was held to 1-for-10 shooting with only two points and not a single three-point basket, a staple for this team.

It was when her team needed her the most that she stepped up and made the big play.

With 21 seconds left, the Colonials only up by two, Coach Buscaglia made the call to get the ball to his star player, it didn’t matter how the game had gone before, the past was not a factor in the decision.

It was a play this team had run hundreds of times before and in countless seasons throughout the team’s history, but in this moment, it stood out all on its own.

“We made a great read,” said coach Buscaglia “At the end of the day we knew exactly what to do.

It was a shot that made the sweetest sound when it went through the basket and the crowd inside the Charles L. Sewall Center went wild. An exclamation point on perhaps RMU’s biggest win of this 2016-17 season.

And it was their star player who made it all happen. Through the struggles she had all day, nothing fazed her when the moment was at its biggest.

“Anna-Niki has a real big heart,” said coach Buscaglia “She wants that ball. she wants that shot and she proved it again today,”

Robert Morris heads on the road to Mount St. Mary’s on Saturday, hoping to continue their winning ways.