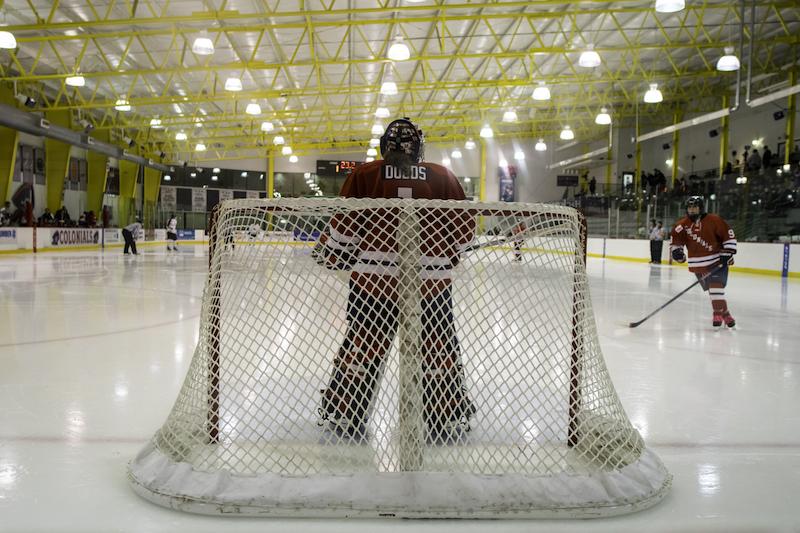 Goaltender Jessica Dodds' play this weekend against Mercyhurst helped her team capture a win and a tie.

RMU 2 (16-2-5, CHA 9-1-1), Mercyhurst 1 (8-16-1, CHA 4-7-0) (OT): The Colonials traveled to Erie, Pennsylvania Friday to begin a two-game weekend series against the Lakers of Mercyhurst. After two scoreless periods of play, RMU found the back of the net in the third period via the stick of sophomore Kirsten Welsh to take a 1-0 lead. With one minute to play in regulation, the Lakers beat RMU goaltender Jessica Dodds to tie the game 1-1 and force overtime. However, senior Maeve Garvey scored the winning the goal on a power play opportunity with a little over a minute to play in the overtime period to give the Colonials the conference victory. Dodds earned the win in net for the Colonials as she finished the day making 15 saves.

RMU 3 (16-2-6, CHA 9-1-2), Mercyhurst 8-16-2, CHA 4-7-1) (OT): Robert Morris wrapped up their weekend road series against Mercyhurst Saturday afternoon in Erie Pennslyvania. Mercyhurst scored-the games first goal early in the opening period but RMU’s Brittany Howard answered back moments later with a goal of her own to tie the contest. The Colonials took a 2-1 lead at the 4:40 mark of the second period after junior Amanda Pantaleo got the biscuit past the Lakers goaltender Sarah McDonnell. Mercyhurst tied the game exactly two minutes later but RMU regained the lead later in the second period when freshman Jaycee Gebhard cashed in on a power play chance to give her team the 3-2 lead. However, The Lakers tied the game early in the third period 3-3 and both teams shut each other out the remainder of regulation play and overtime was needed for the second straight game. Neither team was able to find the back of the net in the extra period of play as both teams skated to the 3-3 tie. Jessica Dodds started back-to-back games for the Colonials between the pipes and made 25 saves Saturday.